Archive for the ‘Transmission’ Category

Acrodermatitis chronica atrophicans (ACA) is a late and chronic manifestation of Lyme borreliosis (LB). ACA predominantly involves the distal portions of extremities and is characterized by chronic cutaneous atrophy. Unlike other skin manifestations of Lyme disease, including erythema migrans (EM) and borrelial lymphocytoma (BL), ACA does not spontaneously resolve. If untreated, ACA may progress from bluish-red discoloration and inflammation to chronic atrophy and fibrosis, with the late-stage being more treatment-resistant.

ACA was first described in 1883 by Buchwald in Germany, and cases were later reported in 1895 in North America. The diagnosis of ACA is based on clinical presentation, as well as serologic testing and histopathologic confirmation. Recognizing ACA is often challenging due to variable latency in disease onset following the primary borrelial infection, and lack of symptoms leading to delay in seeking treatment.

Lyme borreliosis is the most common vector-borne disease in the northeastern United States. It is a multisystem disease caused by the spirochete Borrelia burgdorferi.It is transmitted to humans via an Ixodes tick bite. There are 3 skin manifestations of LB: Erythema migrans (stage 1) with a characteristic “bull’s eye rash,” which, if untreated, can be followed by early disseminated infection, borrelial lymphocytoma (stage 2) along with neurologic and cardiac abnormalities, and late infection, especially arthritis in North America or acrodermatitis chronica atrophicans (stage 3) in Europe. Acrodermatitis chronica atrophicans is the most common late and chronic manifestation of LB. Approximately 20% of patients with ACA have a history of spontaneously healed EM, usually on an extremity where the ACA lesion developed 6 months to 8 years later.

While ‘the powers that be’ continue to want to confine this complex illness within numerical stages and a “one size fits all” box, please know that patients have jumped from stage to stage in no particular order, with some requiring much longer courses of antibiotics/treatments.

Raffaella Harris developed intense fatigue and joint pain while living in Windsor, Ont. in May, 2018. At the time, a tick-borne disease was the last thing she suspected – let alone one not typically found in Ontario.

But even as she searched for answers with her doctor, a bacteria called Rickettsia rickettsii was replicating within her body, introduced through a tick bite she hadn’t even noticed. Within days of the initial onset of her symptoms, Harris was hobbled by pain.  (See link for article and video)

New research out of McGill University and the University of Ottawa has found tick-borne pathogens such as Rickettsia rickettsii and Babesia odocoilei are spreading beyond their usual range and into Central Canada, thanks, in part to climate change.

While these infections are indeed spreading, it has nothing to do with the climate.  Faulty climate change maps which have been used to push a ‘climate change’ agenda have been debunked, with many experts finally coming forth and denying that man has anything to do with the climate at all.
Important to note: neither of these spreading pathogens are listed as a nationally notifiable disease in Canada, which simply means nobody has a clue as to their prevalence.  This is true for many of the “lesser  known” tick-borne diseases as well, and is a real problem.  You can’t state how big a problem is if you aren’t even looking for it.
One of the patients sent her tick to a private lab and paid out of pocket for tests that look for a wide range of pathogens.
This is another real problem that needs to be addressed.  Since everyone and their brother knows ticks are spreading everywhere and are often infected with pathogens transmitted to animals and humans, tick testing should be widely available and FREE.  There is no tick testing for the public right here in Wisconsin, an epicenter for Lyme, Powassan, and other infections.  This simply shouldn’t be.

Rather than fund more faulty, erroneous climate change research, how about we fund labs for something practical like testing ticks and all the pathogens they carry?

Since so many patients slip through the cracks, testing ticks directly would help us know what pathogens are in an area and an idea about prevalence.

This information; however, should never be used against patients, which has happened historically.  The lunacy of telling someone they can’t have Lyme disease because certain ticks don’t exist there or “there aren’t any recorded cases,” is shear madness and defies all sound logic.  Ticks travel everywhere due to migrating birds and other animals that don’t understand borders.

To be clear, a test only picks up what it is created to pick up.  To this day, many strains of of the pathogens infecting humans do not have testing, and those that do aren’t accurate.

The Lanzhou Brucella Leak: The Largest Laboratory Accident in the History of Infectious Diseases?

An inadequacy in sanitizing processes in a biopharmaceutical plant in Lanzhou, China, during July and August 2019, led to the aerosolization of Brucellathat was subsequently spread through wind to nearby settlements and academic institutes, resulting in >10 000 human brucellosis cases, as of November 2020. The leak, possibly the largest laboratory accident in the history of infectious diseases, underlines the particular characteristics of Brucella that have made the pathogen a historical entity in biodefense research and a major cause of laboratory-associated infections. It further underlines the need for enhanced vigilance and strict regulatory interventions in similar facilities.

Brucella should sound familiar to Lyme/MSIDS patients because it’s a cousin to Bartonella, and like most coinfections has many strains that can cause human disease. It is considered an “eternal” microbe due to the fact its DNA persists for years after clinical cure.  Further, in patients that relapse, no statistically significant difference was found in their bacterial load vs asymptomatic patients, indicating yet another stealth pathogen virtually impossible to find or eradicate.

Brucella has infected prosthetic joints, the heart, liver, spleen, intracellularly, and virtually every organ in the body.  It can cause arthritis, swelling of the testicle and scrotum, heart issue, neurological symptoms, chronic fatigue, and depression.

And of course, it garners attention for being a biowarfare agent.

Like so many other pathogens in the Lyme/MSIDS army, it requires prolonged, combined treatment that often fails resulting in relapse.

Routes of infection include eating or drinking infected meat or dairy products, inhalation, and through skin wounds or mucus membranes. However, it’s been found in eggs, larvae, engorged females, and in other ticks:

The presence of DNA from several Brucella species were detected in ticks using real-time PCR assay. Histopathological examination showed ticks cause significant damage to skin and hides by inducing degenration of the epidermal layer from basal layer, collagen degeneration with a focal area of necrosis, adjacent subdermal abscess and infiltration of neutrophils. Control of ticks should be given consideration to reduce the severity of hide damage and concomitant losses in the domestic leather industry. Ticks are known as a vector of numerous pathogens; efforts are underway to educate farmers about financial loss of skin and hide due to tick infestation and preventive control measures.

I realize that just finding something doesn’t mean it can be transmitted.  This would be an excellent thing to study, but won’t be.  Researchers are chasing the golden egg of “climate change,” so we may never completely know if a tick bite could transmit this, but it’s highly probable.

Signs and symptoms look exactly like other tick-borne illnesses.  Treatment is often the combination of doxycycline and rifampin for a minimum of 6-8 weeks.

The recent article by Braun et al. explains the importance of test for Ricketissa tick-borne infection. This infection can hide numerous symptoms like fever, rash, gastrointestinal symptoms such as anorexia, nausea, vomiting, and abdominal pain. 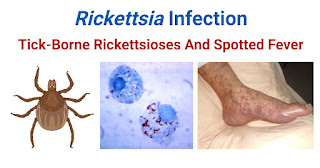 The article: Rocky Mountain Spotted Fever Masquerading as Gastroenteritis: A Common but Overlooked Clinical Presentation, shows a case of a 20-year-old male presented to the emergency department with many alarming symptoms.

It is important to test for Rickettsia in order to help identifying infection rapidly as well as avoid expensive workups and invasive procedures which may delay the needed treatment.

Penile Cancer After a Tick Bite: A Possible Association

Penile cancer after a tick bite: A possible association

Penile cancer is a rare cancer in Western countries, but is more common in parts of the developing world. Usually, it is associated with older uncircumcised men who have a long-term phymotic preputium. Here, we report a case of penile cancer in a circumcised patient, occurring 3 months after a tick bite on the head of the penis. To the best of our knowledge, this is the first report that suggests a possible association between Lyme disease and occurrence of “de novo” penile cancer. Further studies are needed to confirm this hypothesis.

Other research has implicated tick-borne illness with cancer, as well as the COVID shots.

And these studies will never happen because Fauci, the highest paid government employee who owns numerous patents, is the gatekeeper of immunosuppression diseases. What’s important about this is that if immunosuppression diseases actually exist, vaccines become obsolete. Mafia overlord, Fauci can not allow the truth to come out because our government owns over 50 patents on vaccines, and NIH owns half of the Moderna COVID shot.  There’s simply too much at stake.

Fauci, head of NIAID for 7 presidencies, is also the controller of the purse strings for government research grants and researchers know they must tout the accepted narrative if they want funding. He would rather fund lucrative, but horrifically grizzly experiments on children and puppies – and of course big cash cows like mRNA products and “vaccines,” that our corrupt public health agencies own patents on and receive secret payments from.  It’s a win-win for government and Big Pharma while the public suffers in silence.

Ticks manage to get everywhere.