Lyme Coinfection Comparisons: What Your Symptoms Could Be Telling You

Lyme Coinfection Comparisons Charts: What Your Symptoms Could Be Telling You

One of the most challenging aspects of reclaiming your health from chronic Lyme disease is knowing where to turn when new or different symptoms pop up. “My perception after studying a variety of intracellular microbes for years is that each microbe has a preference for different types of cells in the body,” says Dr. Bill Rawls, Medical Director of RawlsMD and Vital Plan.

For example, Borrelia burgdorferi, the predominant bacteria that causes Lyme disease in the United States, has an affinity for collagenous tissues in the body. Therefore, the symptoms that come with borrelia infection tend to impact those areas with high concentrations of collagen: the brain, joints, muscles, etc. But some additional, unexpected symptoms can arise from Lyme coinfections (simultaneous infections), and it’s not always easy to figure out which microbe is the chief, problem-causing culprit, especially since testing for Lyme disease and coinfections is woefully inaccurate.

Coinfections at a Glance

Though the symptoms of borrelia often get top billing when it comes to Lyme disease, there’s rarely a single microbe at play when you’re dealing with persistent symptoms. Besides Lyme, the main coinfections that patients often contend with include babesia, bartonella, and mycoplasma. Below is a brief description of each one:

“The reason you’re having symptoms from Lyme and coinfections is that each of these microbes is affecting certain cells in the body, and it could be either one microbe or several microbes contributing to the problem,” says Dr. Rawls. “Every person’s symptoms are a little bit different because the spectrum of microbes they carry is different.”

Thus, understanding key characteristics of these more common Lyme disease coinfections can serve as a guide for you and your physician to best target your treatment. “Knowing if you have, say, bartonella or babesia can help you figure out if you need to add on additional herbal therapies or remedies to support your recovery efforts,” explains Dr. Rawls.

So to assist you, we’ve put together seven coinfection comparison graphics, highlighting the similarities, differences, and telltale signs between borrelia, babesia, bartonella, and mycoplasma, frequent infections that often go hand in hand.

The following two graphics demonstrate the telltale and shared signs and symptoms of borrelia, babesia, bartonella, and mycoplasma that you might not be aware of. Having information about which symptoms are distinct to a particular infection and which ones overlap with others can aid you in identifying the various pathogens you might be dealing with or may have overlooked in your current treatment regimen.

Telltale and Shared Signs and Symptoms 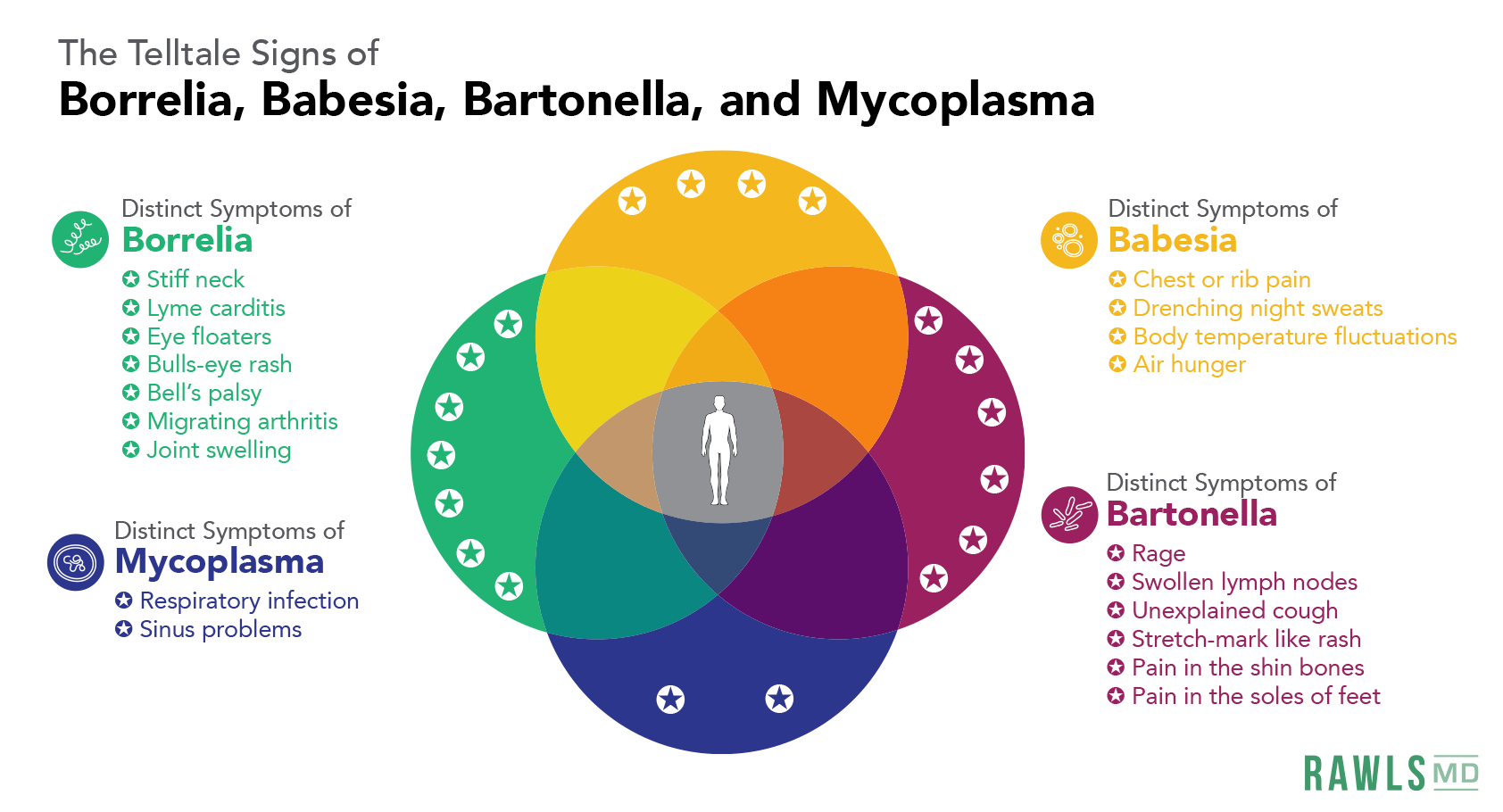 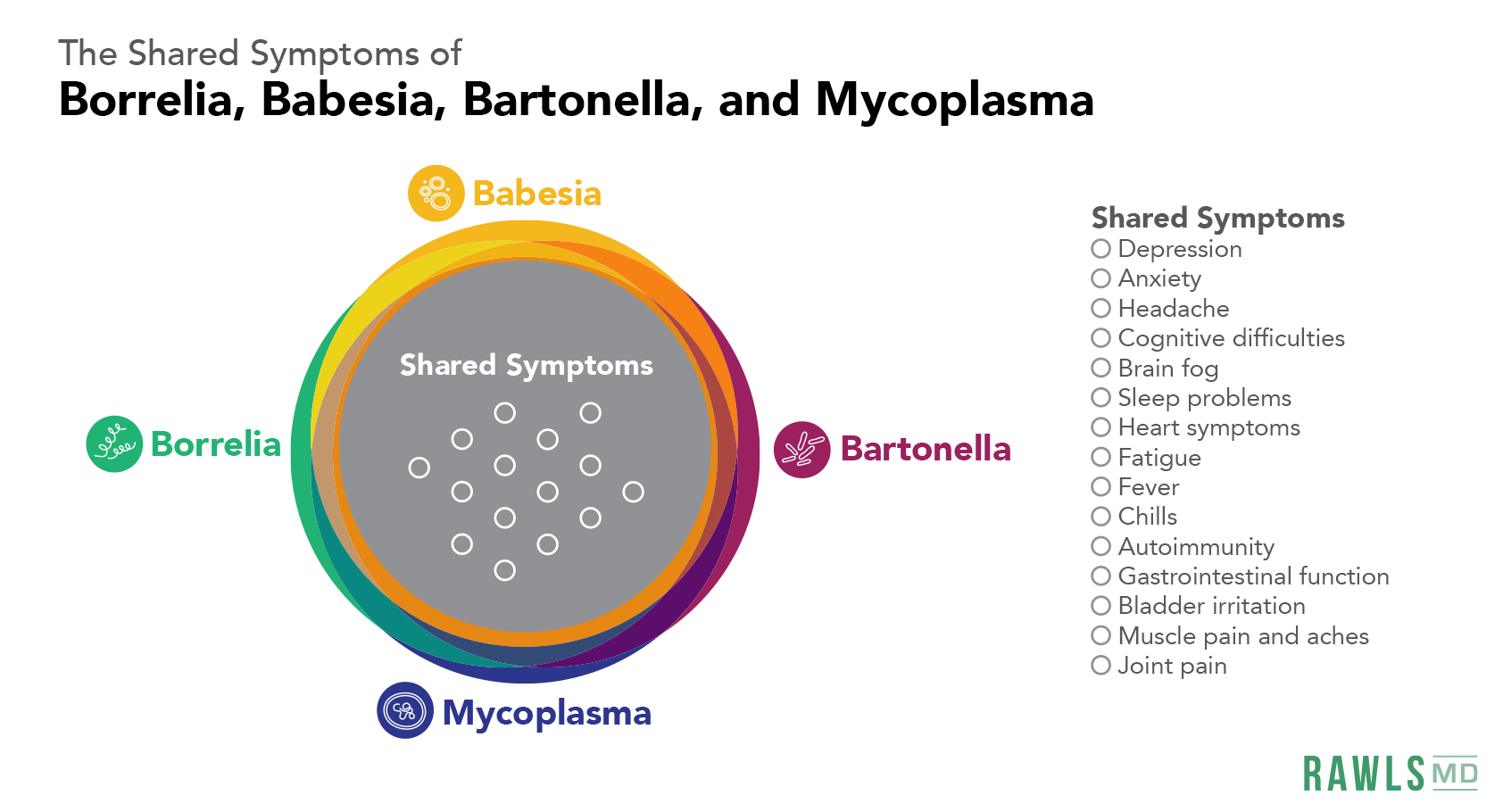 Here, we’ve detailed a more complete snapshot of the range of symptoms borrelia, babesia, bartonella, and mycoplasma infections can cause. Bear in mind that many symptoms are similar, so it’s crucial to evaluate your overall symptom profile to get a more accurate diagnosis of what might be going on with you.

The next four graphics allow you to see how Lyme and coinfections could be affecting different systems of the body and influencing how you feel: 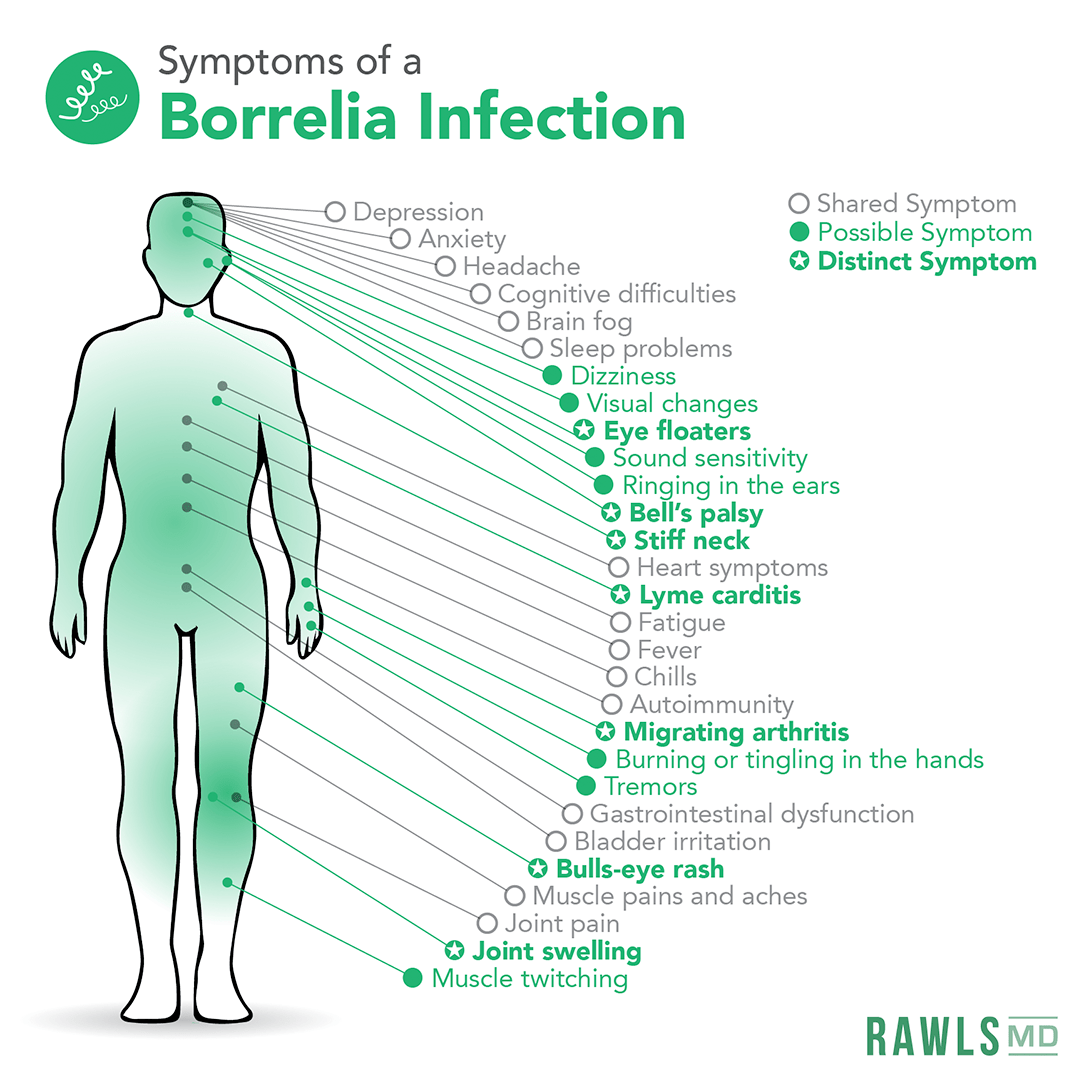 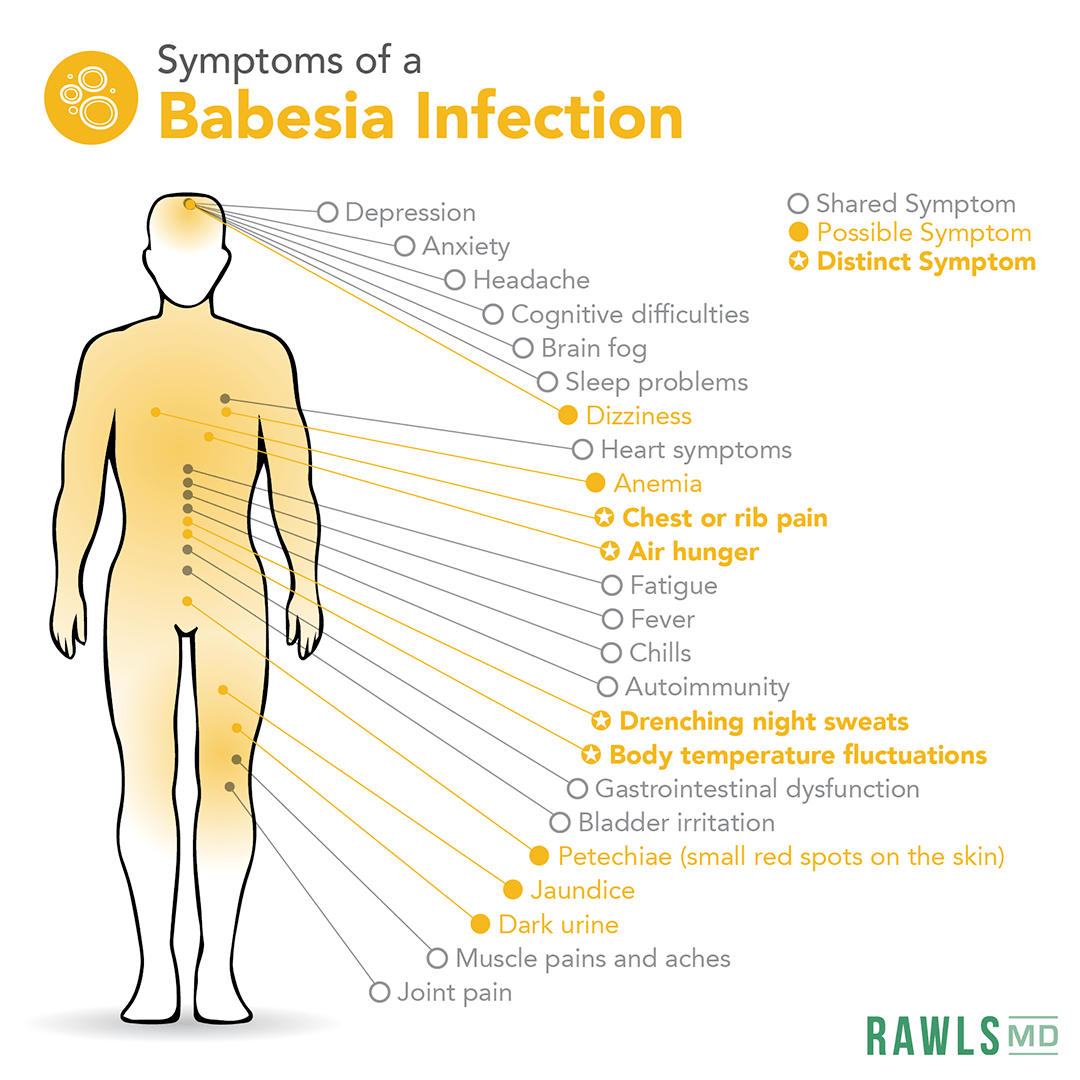 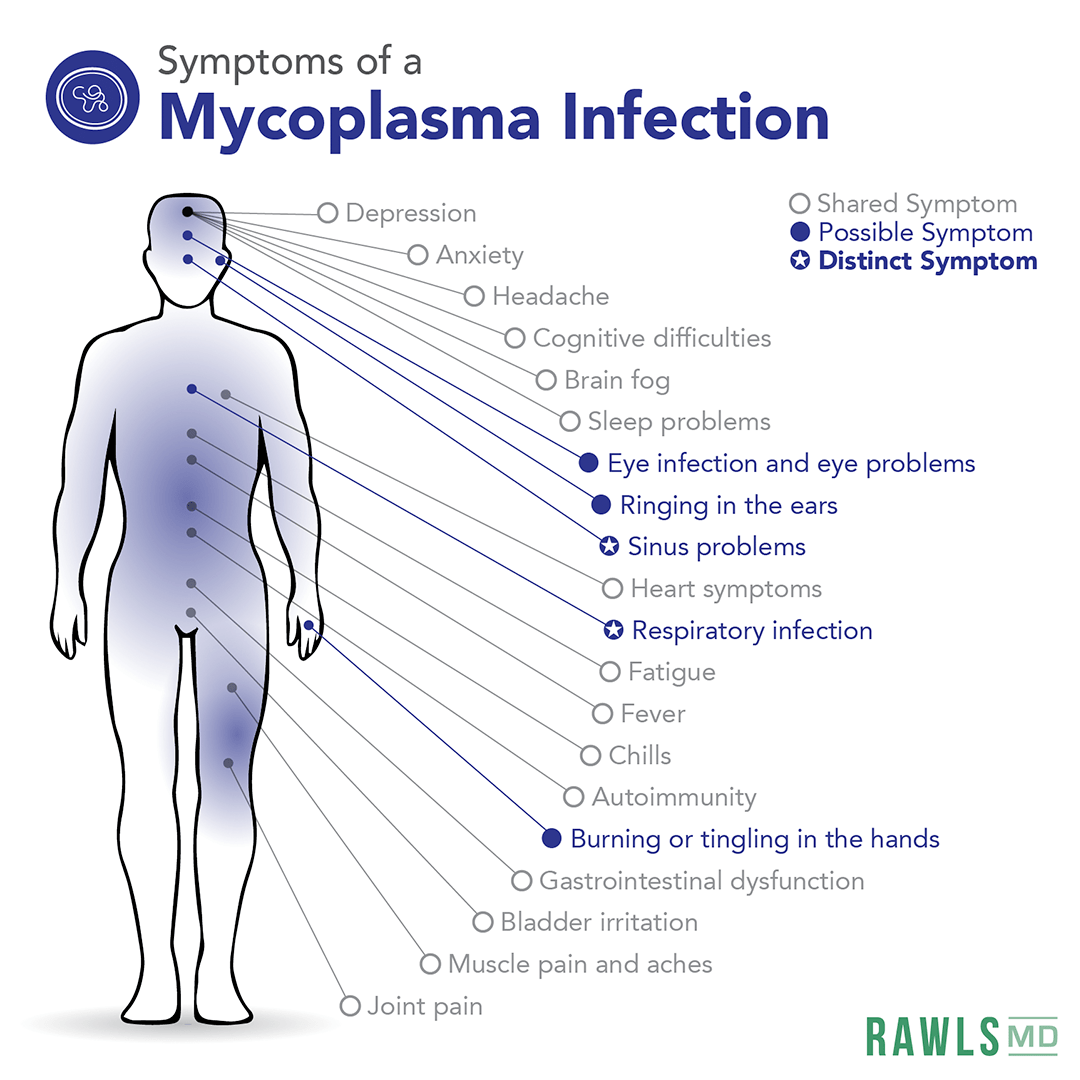 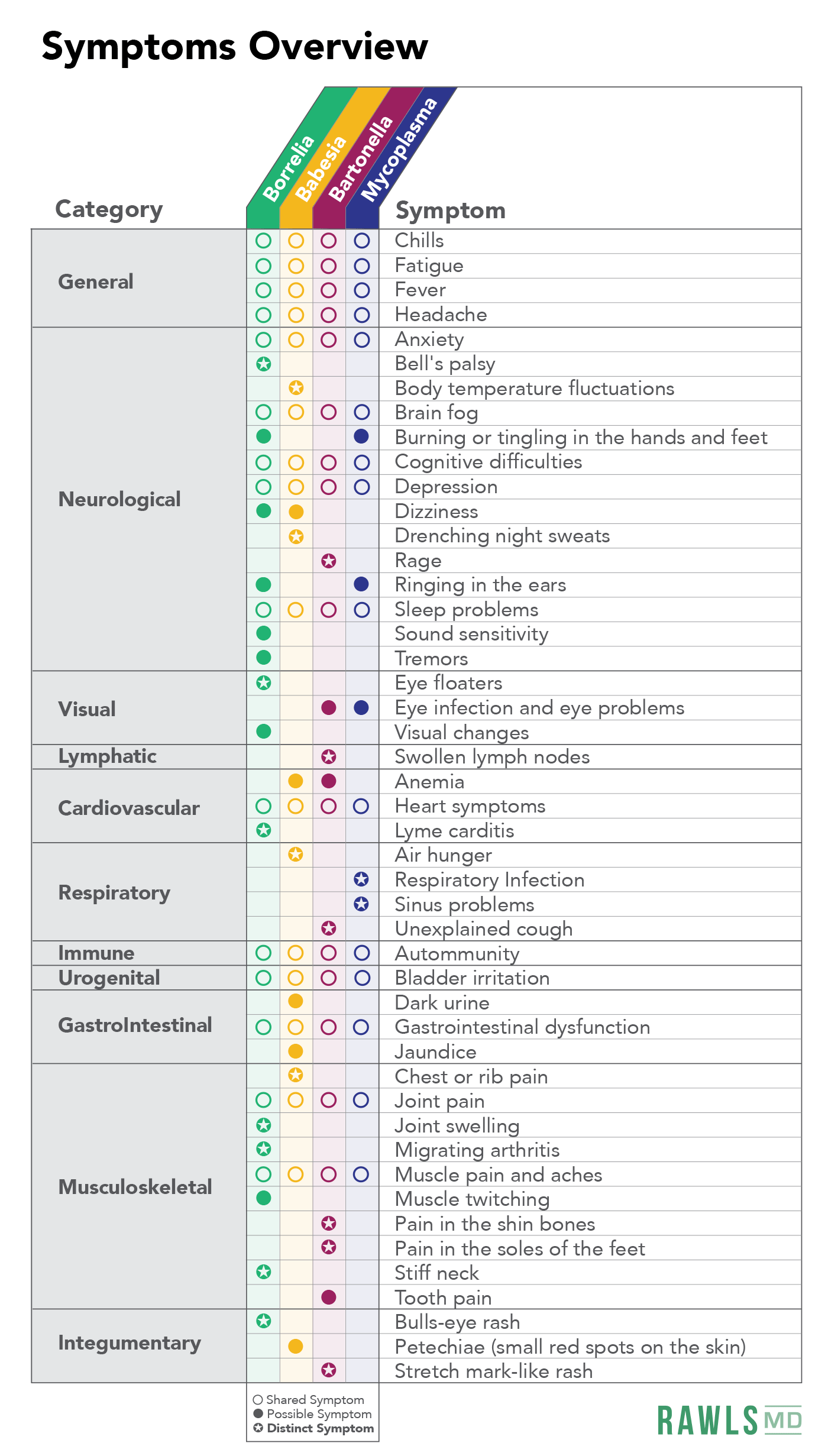 When it comes to overcoming chronic Lyme disease, gauging what to treat can sometimes be confusing due to the widespread set of symptoms you may be experiencing. However, you can use these graphics to help distinguish between overlapping symptoms and those that are distinct to specific pathogens. Combine this information with a comprehensive natural protocol and work your way through potential coinfections to move toward better, more vibrant health again.

You can also learn about Dr. Rawls’ personal journey in overcoming Lyme disease and fibromyalgia in his popular blog post, My Chronic Lyme Journey.

Unfortunately, MSM still believes this is a one pathogen, one drug disease when nothing could be further from the truth.  Dealing with coinfections is a must and they are just as severe and dangerous as Lyme.  Treating this complex illness is like peeling back the layers of an onion.  Symptoms will wax and wane and new ones will crop up.  Understanding how to treat this requires a Lyme literate doctor.  Don’t mess around with MSM.  All it will do is take your money, abuse you, and cause you more suffering and pain.

To date, there are 19 and counting pathogens that could be transmitted by the singular bite of a tick.

Lyme is just the rock star we know by name. Also, it’s important to understand this complex illness does a number on the immune system. You are essentially a host and these pathogens deplete many important hormones, minerals, etc., requiring you to supplement and address these deficiencies.

To read of one man’s experience being infected with multiple pathogens go here.

Unfortunately, the article erroneously states this is rare. Everyone I work with is infected with at least 3 pathogens, and many have more than that. This makes cases more severe and harder to treat.

Comments Off on Lyme Coinfection Comparisons: What Your Symptoms Could Be Telling You

A Comprehensive & Practical Review of Mold Toxicity & Its Complications