The FDA is now trying to rewrite history and the fact they prohibited safe, effective, cheap drugs.  Doctors have been viciously harassed by those benefitting from the COVID shots, the AMA and corrupt public health. Some have lost their jobs for prescribing these censored drugs.  Families have had to utilize the court system simply to have access to drugs effective for COVID that are on the WHO essential list of medicines.  The problem is ‘authorities’ knew these drugs worked long ago, but concealed it.

Because of its (now) known nature, the SARSr-CoV-WIV’s illness is readily resolved with early treatment that inhibits the viral replication which spread the spike proteins around the body (which induce a harmful overactive immune response as the body tries to clear the spikes from the ACE2 receptors). Many of the early treatment protocols ignored by the authorities work because they inhibit viral replication or modulate the immune response to the spike proteins, which makes sense within the context of what EcoHealth was creating. Some of these treatment protocols also inhibit the action of the engineered spike protein. For instance, Ivermectin (identified as curative in April 2020) works throughout all phases of the illness because it both inhibits viral replication and modulates the immune response. Of note, chloroquine phosphate (Hydroxychloroquine, identified April 2020 as curative) is identified in the proposal as a SARSr-CoV inhibitor, as is interferon (identified May 2020 as curative). [Emphasis added.]

In a lawsuit filed June 2, Drs. Robert L. Apter, Mary Talley Bowden and Paul E. Marik argued the FDA acted outside of its authority by directing the public, including health professionals and patients, to not use ivermectin — even though the drug is fully approved by the FDA for human use. 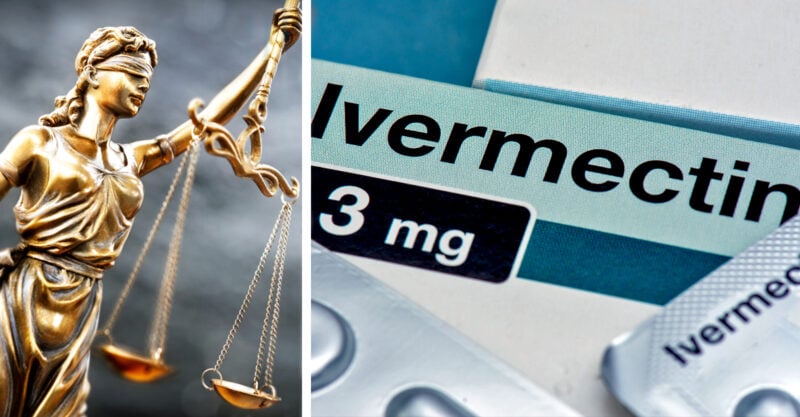 Three physicians are suing the U.S. Food and Drug Administration (FDA) for launching what they allege is a “crusade” against ivermectin as a treatment for COVID-19 that “unlawfully interfered” with the doctors’ ability to practice medicine.

In a lawsuit filed June 2, Drs. Robert L. Apter, Mary Talley Bowden and Paul E. Marik argued the FDA acted outside of its authority by directing the public, including health professionals and patients, to not use ivermectin — even though the drug is fully approved by the FDA for human use.

According to the complaint:

“The FDA generally cannot ban particular uses of human drugs once they are otherwise approved and admitted to the market, even if such use differs from the labeling — commonly referred to as ‘off-label’ use.

“The FDA also can not advise whether a patient should take an approved drug for a particular purpose. Those decisions fall within the scope of the doctor-patient relationship.

“Attempts by the FDA to influence or intervene in the doctor-patient relationship amount to interference with the practice of medicine, the regulation of which is — and always has been — reserved to states.”

The plaintiffs said their lawsuit isn’t about whether ivermectin is an effective treatment for COVID-19. It’s about who determines the appropriate treatment for each unique patient and whether the FDA can interfere with that process.

In their complaint, they site an FDA publication, “Why You Should Not Use Ivermectin to Treat or Prevent COVID-19,” and tweets from the FDA — including one implying that ivermectin is intended only for animals — among examples of the FDA discouraging the use of ivermectin.

The plaintiffs also argued if the FDA is allowed to interfere with the practice of medicine now, using the pandemic as a cover, “this interference will metastasize to other circumstances, destroying the carefully constructed statutory wall between federal and state regulatory powers, and between the FDA and the professional judgment of health professionals.”

“I hope these plaintiffs will enjoin the FDA from continuing to restrict access to ivermectin and from penalizing healthcare practitioners who use this licensed drug for their patients.”

Apter, who is licensed to practice medicine in Arizona and Washington and has a COVID-19 patient survival rate of more than 99.98%, was referred to the Washington Medical Commission and Arizona Medical Board for disciplinary proceedings for prescribing ivermectin to treat COVID-19.

In a press release, Apter said, “If doctors are freed to treat patients according to their best judgment and unprejudiced evaluation of the medical literature, many thousands more deaths and serious disabilities will be averted.”

Apter said the FDA’s pronouncements against the use of ivermectin “have been the basis for disciplinary actions against doctors, interfere with the doctor-patient relationship, and have had a severe chilling effect on the use of life-saving medication for a deadly disease.”

In the lawsuit, Apter argued that government pressure, “largely through the FDA,” also led pharmacies — especially in large corporate chains — to refuse to fill ivermectin prescriptions for COVID-19, because that position is supported by the FDA.

Bowden, who according to the lawsuit has 40 years of experience in emergency medicine, began recommending ivermectin to treat COVID-19 in early 2020. She treated more than 3,900 patients for COVID-19, with a success rate of over 99.97%.

She said the FDA’s actions regarding ivermectin, specifically its directives to stop using the drug to treat COVID-19, harmed Bowden’s ability to practice medicine and treat patients.

Bowden said she is “fighting back — the public needs to understand what the FDA has done is illegal, and I hope this suit will prevent them from continuing to interfere in the doctor-patient relationship.”

In an interview earlier this year with The Defender, Bowden said she was all for the COVID vaccines when they first came out — it was only when she started seeing what was happening with all the breakthrough cases that she wondered, “Why am I seeing so many COVID cases among the fully vaccinated?”

Then her patients began having adverse reactions. “If I hadn’t seen that firsthand, I would still think the vaccine was the way to go,” she said.

“The basis of it is ivermectin,” she said. “And also vitamins C and D, quercetin and zinc, and black seed oil. It’s nothing complicated — and it’s just like with anything in medicine — not one size fits all — protocols are guidelines.”

The controversy over prescribing ivermectin was initially “intimidating and isolating,” she said. “I thought I was a little bitty island in a huge ocean, and now I realize that I’m part of at least half a continent.”

Marik, author of more than 750 publications, was professor of medicine and chief of pulmonary and critical care medicine at Eastern Virginia Medical School (EVMS) in Norfolk, Virginia, from 2009 through 2021. He also served as a director of the intensive care unit at Sentara Norfolk General Hospital.

He developed a protocol for EVMS for treating COVID-19, called the EVMS COVID-19 Management Protocol, which included the MATH+ Protocol.

However, according to the lawsuit, Marik was forced to resign from his positions at EVMS and Sentara Norfolk General Hospital for promoting the use of ivermectin — “as well as other safe, cheap, and effective off-label FDA-approved drugs” — to treat COVID-19 following the FDA’s attempts to stop use of those drugs for that purpose.

Marik alleged in the lawsuit that refusing to allow patients to receive effective early treatment for COVID-19 “led to innumerable hospitalizations and deaths, and caused extreme distress for patients, their families, and health professionals.”

Ivermectin was developed in the 1970s as a veterinary medicine to treat parasitic diseases in livestock, but a decade or so later was hailed as a “wonder drug” and received approval for human use as a therapeutic against diseases such as river blindness — or onchocerciasis — and lymphatic filariasis, according to Newsmax.

Since 1987, it has been used safely in 3.7 billion doses worldwide. William Campbell and Satoshi Omura won the 2015 Nobel Prize in Physiology or Medicine for their research on the drug.

Studies show ivermectin is associated with lower COVID-19 death rates, but the FDA — with help from mainstream media — continues to state the drug is ineffective for treating COVID.

You know it’s bad when it takes a court-order to utilize a cheap, safe, effective drug that saves lives.

But the AMA, AphA, ASHP, in lock-step with the FDA, continues to promise to fight ‘misinformation’ – an overused & highly politicized term that simply means anything that defies the accepted narrative created by conflict-riddled public health ‘authorities’ that have patents on virtually every aspect of COVID.  If you are unaware, we are in a war for truth.

There were more than 500 deaths in the first year of remdesivir usage.  Please read this article on why hospitals are pushing the “Fauci Death Protocol” which includes the ineffective & toxic drug remdesivir.  Some nurses refer to remdesivir as “Run, death is near.”

There have been 20 deaths in 19 years of ivermectin usage.

The FDA, spurred by “multiple” reports of ivermectin ‘poisoning,’ lied when it put out a post on it causing “serious harm, seizures, coma, and even death”.  When the author inquired on how many is “multiple,” she was told FOUR.Yet, the FDA had no trouble approving remdesivir which has caused far more deaths.

CDC also bad-mouthed ivermectin and pushed the “calls to the poison control center” narrative. The problem is they give no data to support this claim.

In India, ivermectin is a house-hold name and easily available for about $2 at the nearest drug store.  People there no longer fear COVID.  They simply treat it.

Recently the FDA was caught creating and using unreliable and inconsistent data to create an illusion of COVID shot efficacy in an attempt to justify approval for infants and toddlers. Peter Marks, charged with setting FDA decisions on whether to consider “vaccines” for specific populations, is also conveniently involved in a study conducted to bolster the “vaccines” he is tasked to decide upon – a clear conflict of interest. Call your senators and representatives and demand that Marks resign.  Email them this article.

There needs to be a FDA, CDC, NIAID walkaway movement.  These agencies are completely corrupt.

Comments Off on Doctors Sue FDA, Allege Crusade Against Ivermectin ‘Unlawfully Interfered” With Their Ability to Treat Patients

The History of Lyme Disease Has a Wisconsin Chapter. It’s Still Being Written