Disulfiram–breakthrough drug for Lyme and other tick-borne diseases? 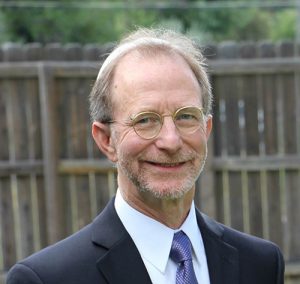 By Daniel A. Kinderlehrer MD

I have been practicing medicine long enough to be very skeptical of “breakthroughs.” But disulfiram may be the real thing. Let’s keep our fingers crossed.

Anyone who reads the financial pages has heard of Steven Cohen, the multi-billionaire hedge fund manager and philanthropist. Cohen lives in Connecticut where his wife, Alexandra, became ill with Lyme disease.

The Cohens established the Cohen Lyme and Tick-borne Disease Initiative, a division within their philanthropic organization focused on supporting Lyme and tick-borne disease research. The Steven and Alexandra Cohen Foundation has committed over $60 million dollars to support more than 25 Lyme disease research projects.

In 2016, the Cohen Foundation sponsored the first annual “Lyme Disease in the Era of Precision Medicine Conference” at the Mount Sinai School of Medicine in New York.

Those of us who actually treat Lyme disease know there is nothing precise about it. Treating chronic infection with Borrelia burgdorferi, complicated by any number of co-infections, is often hit or miss. Nevertheless, we who practice where the rubber meets the road are grateful for whatever clues basic researchers provide that can help our patients.

At that conference, Kim Lewis, leader of Northeastern University’s Antimicrobial Discovery Center, presented data on the relative effectiveness of different antibiotics against Borrelia burgdorferi in his laboratory.[1] Lewis was testing different pharmaceuticals against Bb, and one of the drugs he tested was disulfiram, also known as Antabuse.

Disulfiram inhibits the enzyme acetaldehyde dehydrogenase, leading to a buildup of acetaldehyde.

This is bad news if you drink alcohol, because acetaldehyde is responsible for the symptoms we know of as hangovers. This drug is prescribed to alcoholics as a deterrent to drinking alcohol, since having just one drink will result in a vicious headache.

It turns out disulfiram has known activity as an antimicrobial. Studies have demonstrated its action against gram-positive bacteria such as Staphylococcus and Streptococcusspecies[2] as well as Plasmodium falciparum, a.k.a. malaria.[3]

Number one against Bb

In 2016, Venkata Raveendra Pothineni and colleagues at Stanford reported on new drug candidates against Borrelia burgdorferi using a technique known as high-throughput screening.[4] They ranked disulfiram as number one in activity against Bb among their top 20 hits.

On the basis of Pothineni’s work, Lewis compared the activity of disulfiram against a few other well-known drugs used in the treatment of Lyme disease. In his talk at the Precision Medicine conference, Lewis showed a slide that looked like this: 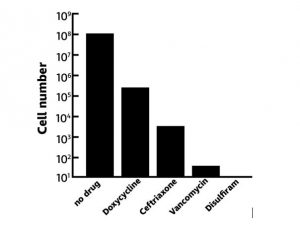 This bar graph depicts the number of colonies remaining after treating Bb with the following four drugs: doxycycline, ceftriaxone, vancomycin, and disulfiram. It is clear that vancomycin is a powerful drug to treat Lyme disease. But disulfiram completely sterilized the culture—there were no persisters! The mechanism of action of disulfiram as an antimicrobial is still unclear.

The effectiveness of an antibiotic in the laboratory does not always translate to its effectiveness in people. Furthermore, there have been no animal or human studies researching the efficacy of disulfiram in the treatment of Lyme disease.

But a patient of Dr. Ken Liegner of Pawling, New York, saw the lecture by Dr. Kim Lewis on YouTube and asked to be treated with disulfiram. This patient had been infected in May 2008, and diagnosed with Lyme disease and babesiosis. He was treated aggressively with oral antibiotics as well as intravenous gamma globulin (IVIG), since his serum level of IgG antibodies was low.

After nine years of treatment, the patient had improved substantially. However, any attempt to decrease or discontinue his antibiotics resulted in a relapse of his multi-systemic symptoms within two weeks.

Dr. Liegner explained to the patient that there were no studies investigating disulfiram in the treatment of Lyme disease. But he agreed to treat the patient with appropriate monitoring of his lab tests. The patient began disulfiram 500mg daily and simultaneously discontinued his previous antibiotic regimen. After four months on this regimen, the patient declared, “I’m cured!” and stopped treatment.

Interestingly, the patient had had a psychiatric hospitalization during treatment, which he related to significant situational stress. Dr. Liegner was concerned because there have been rare reports of disulfiram causing psychiatric problems. The patient did not think it was the drug, and said, “Even if it was responsible, it was worth it! Don’t fail to offer it to people just because of that!” The patient has continued to be symptom-free over two years later.

Dr. Liegner has reported the results of treating his first three patients with disulfiram in a recent article published in the journal “Antibiotics.”[5]  I encourage readers to check it out. He now has over 30 patients on this treatment, and he is impressed with how highly effective it is for both Lyme disease and babesiosis.

Since disulfiram has been shown to kill Plamodium falciparum (malaria) in the laboratory, it is not surprising that it would also be effective against Babesia. Dr. Lewis is planning to do a study on mice infected with Bb. In addition, Dr. Brian Fallon at Columbia University has announced his intention to undertake a controlled trial using disulfiram in well-characterized patients with Lyme disease. (Click here for more information about the clinical trial.)

There is a possibility that disulfiram is also active against Bartonella. Anecdotally, I have two patients who appear to have had Bartonella Herxheimer reactions when they began disulfiram. Additionally, there is a Facebook group among people who are on this medication, and the experience of some members has led them to believe that disulfiram hits Bartonella[6].

Thus far, my clinical experience with disulfiram is not extensive, but I am clearly seeing benefits as well as Herxheimer reactions. Because of the Herxheimer reactions, it is best to start slowly. The medication comes in tablets that are 250 mg and 500 mg. Starting doses are usually 67.5mg or 125 mg every three days, with increasing doses every two weeks if well tolerated. The full dose for an average adult is 500 mg daily.

The exciting news is that Dr. Liegner has found that many patients can stop the medication after four to six months and continue to stay in remission. It is recommended to check liver tests periodically, but disulfiram has a relatively low risk profile and few drug interactions. It is also inexpensive.

I am still skeptical about breakthroughs, but there is reason to be optimistic that disulfiram may be a game changer. Let’s keep our fingers crossed.

Dr. Dan Kinderlehrer is an internal medicine physician with a private practice in Denver, Colorado, devoted to treating patients with tick-borne illness. He is the author of the forthcoming book, “Recovery From Lyme: The Integrative Medicine Guide to the Diagnosis and Treatment of Tick-Borne Illness.” It will be released next year.

Comments Off on Disulfiram-breakthrough drug for Lyme & Other Tick-borne Diseases?

How to Set Healthy Boundaries