Kansas Senate also has voted to allow doctors to prescribe ivermectin and HCQ for off-label treatment of COVID. It is called the Off-Label Drug Hill (HB2280). The bill also requires that pharmacists fill prescriptions for medications to treat COVID — by forbidding them to refuse to fill prescriptions solely on the grounds that a medication is being used for COVID.  It would also would require childcare centers and public schools to grant parents’ requests for religious exemptions from ‘vaccination’ for their children, “without inquiring into the sincerity of such religious beliefs.” The bill now heads to the House but is 6 votes short of the supermajority needed to override a veto from Democratic Gov. Laura Kelly.

The New Hampshire House on Wednesday passed a bill allowing the state’s pharmacists to dispense ivermectin over the counter, without a prescription. HB 1022 also prevents New Hampshire medical licensing boards from disciplining doctors for prescribing the drug. 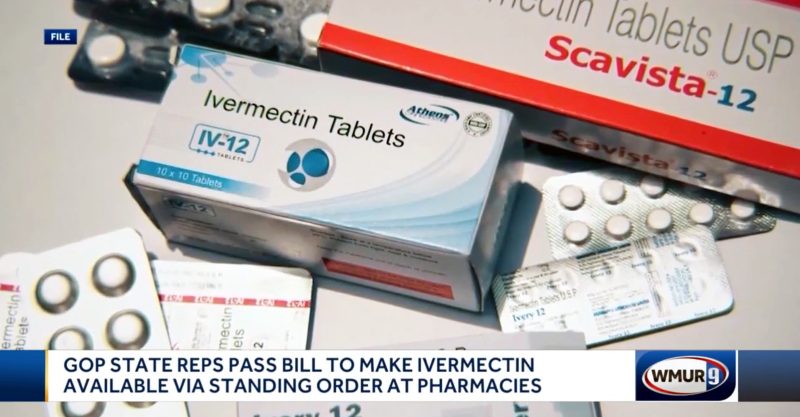 The New Hampshire House on Wednesday passed a bill allowing the state’s pharmacists to dispense ivermectin over the counter, without a prescription.

“HB1022 permits ivermectin to be dispensed by a pharmacist via a standing order, effectively making it available over the counter. The evidence is growing regarding ivermectin’s effectiveness in reducing severity and duration of COVID-19. When people want access to ivermectin because they or their loved ones are ill, they will get it by any means they can.

“Since many doctors are afraid to prescribe anything off-label for the treatment of COVID-19, patients have turned to foreign pharmacies, buying it on the black market, or buying ivermectin formulated for animals. We need to pass this bill to expand access to pharmacy-grade ivermectin for the people of New Hampshire.”

Dr. Meryl Nass, a Maine physician and member of the Children’s Health Defense (CHD) Scientific Advisory board, praised New Hampshire lawmakers for passing the bill. She told The Defender:

“Yesterday, legislators in the New Hampshire House did something amazing for COVID patients … In order to save their lives using a safe and effective drug, New Hampshire residents will be able to buy human ivermectin from drug stores without a prescription.”

If the bill passes the Senate, patients will “no longer need to dread developing COVID with little prospect of early treatment,” Nass said.

“CHD still advises that it is always preferable to get care from a medical professional, whenever possible. But when it isn’t, being able to self treat should make a huge dent on COVID mortality and morbidity.”

Nass advised people to read the warnings on ivermectin, avoid drug interactions (especially with coumadin) and take the proper dose by weight. “Most importantly, start treatment early,” she said.

Nass, who supports the use of ivermectin and hydroxychloroquine for treating COVID patients, on Jan. 12 was suspended by the Maine medical licensing board, which accused her of spreading “misinformation regarding the SARS CoV-2 pandemic and the official public health response calling for vaccinations.”

The U.S. Food and Drug Administration has not authorized the use of ivermectin to treat or prevent COVID-19 and has published documents on its website intended to discourage people from using the drug as a treatment for COVID.

Ivermectin is on the World Health Organization’s List of Essential Medicines. It has been used safely in pregnant women, children and infants.

Ivermectin was developed and marketed by Merck & Co. Dr. William C. Campbell and Professor Satoshi Omura were awarded the 2015 Nobel Prize for Physiology of Medicine for discovering and developing avermectin, later modified to create ivermectin.

Ivermectin is an antiparasitic, but it has shown, in cell cultures in laboratories, the ability to destroy 21 viruses, including SARS-CoV-2, the cause of COVID-19.

Ivermectin has been shown to speed recovery from COVID, in part by inhibiting inflammation and protecting against organ damage. This pathway also lowers the risk of hospitalization and death. Meta-analyses have shown an average reduction in mortality that ranges from 75% to 83%.

The 10 doctors who are in the Front Line COVID-19 Critical Care Alliance call ivermectin “one of the safest, low-cost, and widely available drugs in the history of medicine.”

Some doctors have speculated that tens of thousands of deaths could have been prevented if repurposed drugs such as hydroxychloroquine and ivermectin had been more deeply explored and promoted at the outset of the pandemic, instead of suppressed.

New Hampshire is not the only state attempting to address the use of off-label treatments for COVID by making it easier for people to obtain the drugs and by protecting those who prescribe and dispense them.

North Dakota Gov. Doug Burgum on Nov. 12, 2021, signed into law HB 1514, a bill that prevents licensing boards from taking disciplinary action against doctors, nurses and pharmacists for the “off-label treatment or prevention of severe acute respiratory syndrome coronavirus 2 identified as SARS-CoV-2, or any mutation or viral fragments from SARS-CoV-2.”

More than 28 states have proposed or passed legislation either restricting medical board authority, explicitly allowing for the off-label treatment of COVID or both.

While most of these bills are still in the introductory stages, several have made it out of subcommittee and are ready for a general vote.

Ivermectin has been used successfully in every stage of COVID, including those on ventilators who were close to death’s door.  I have used it personally twice now with immediate effects.  Doctors around the world are speaking up and stating it is nearly miraculous in its anti-viral properties.  It is my opinion that it works against many if not all viruses, which is why it is being squashed.

Who’s Responsible for the Suppression on Ivermectin?