Evidently the AMA doesn’t have enough medical issues to worry about and now has become embroiled in highly politicized, bipartisan issues such as gun violence and has proudly announced that political candidates should refuse political donations from groups that oppose gun-violence measures. This of course is directed against groups that support the 2nd amendment – the right to bear arms and protect yourself.  If you argue that gun violence is a medical issue, then ask yourself why the AMA isn’t going after Big Ag and the use of pesticides that cause cancer or the daily use of antibiotics in animals raised for consumption that is far more to blame for antibiotic resistance than poor, sick Lyme/MSIDS patients who require longer courses of treatment. Why aren’t they going after Big Pharma and the COVID gene therapy injections that have caused more injury and death than any other vaccine in the history of VAERS?  Good questions that reveal Oz behind the curtain.

The AMA is not our friend, but is a political organization that wants to monopolize medicine, and cares more about money and power than patients.

State legislators are pushing back against the draconian AMA:

“Ivermectin has not been shown to be one of those to be effective for the COVID-19 virus,” Dr. Gerald Harmon, president of the AMA, told MSNBC’s Chris Hayes. Harmon he understands “the zeal” for embracing drugs like ivermectin and hydroxychloroquine for off-label use, but “right now the safest thing for you to do is take the current approved courses … If you require more treatment, there are established safe, very well-approved treatments.”

Please remember the sordid history of the AMA, founded by true quacks who weren’t even doctors, which seeks to be the exclusive provider of medicine, by eliminating anything it considers a threat. It was found guilty of conspiring against the chiropractic profession.

In short, The AMA does not play nicely with others and now is taking part in a witch hunt against its own.

Go here to listen to a brief message by Sayer Ji, founder of Greenmedinfo.com, emphasizing the need for information so people can make the best most informed health decisions. He also admits they and others have been attacked, censored, and deplatformed like never before.  Mainstream media is complicit in all of this.

AFLDS has been maliciously attacked as part of an ongoing, orchestrated effort by media outlets who are making billions from Big Pharma and pandemic-related government advertising. The CDC’s own data debunks the government and pharmaceutical industry’s narrative that only vaccines can save us from from Covid-19. In fact, the CDC’s own numbers reveal the truth, which is that your own immune system can virtually always manage this virus. According to the CDC, even without treatment, the survival rate is 99.98% under age 50 and almost 95% over age 70. Both numbers approach 100% with early treatment.

As for the success of Ivermectin and other protocols for COVID: 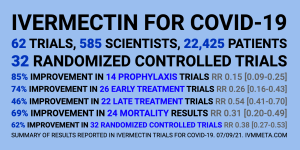 To further delineate the state of COVID madness in the world, the ACLU on one hand states inmates who were uninformed about being prescribed ivermectin for COVID are prepared to file a lawsuit to halt its use, but out of the other side of its mouth states that forcing people to take “vaccines” is a victory for civil liberties.  Huh?

Physicians who publicly spread misinformation about the COVID-19 pandemic could be sanctioned by the American Board of Emergency Medicine (ABEM), including potentially losing board certification, the organization said Thursday.

“Making public statements that are directly contrary to prevailing medical evidence can constitute unprofessional conduct and may be subject to review by ABEM. Should ABEM determine that a physician is promulgating inaccurate information that is contrary to the interests of patients and that adversely impacts public safety, ABEM may withdraw or deny certification for that physician,” they stated.

This warning echoes a statement that focused on COVID-19 vaccines specifically from the Federation of State Medical Boards (FSMB) issued earlier this month. Both follow reports of some physicians deliberately spreading misinformation about the pandemic — especially regarding the safety and efficacy of the vaccines.  (See link for article)

Just to pound the nail in the coffin, doctors are reminded yet again if they happened to forget, Big Brother is watching them closely and anyone stating anything that isn’t in the accepted narrative script will be hunted down and persecuted. The article goes on to list many of the 20 “notable” super spreader physicians giving this “misinformation,” and that they had yet been disciplined by their state boards as of last week.

The catch of course is what actually constitutes “misinformation?” Look no further.  ABEM’s Code of Professionalism states:

“ABEM certification requirements for professionalism includes an ethical requirement to … Refrain from conduct that the Board determines, in its sole judgment, to be sufficiently egregious that it is inconsistent with ethical behavior by a physician.”

They clearly spell out that behavior, solely determined by the board to be inconsistent, will result in decertification.

The Federation of State Medical Boards (FSMB) has also stated earlier that doctors and health professionals could be at risk of losing their medical licenses if they spread COVID-19 vaccine misinformation on social media, online and in the media.  Excerpt:

“They also have an ethical and professional responsibility to practice medicine in the best interests of their patients and must share information that is factual, scientifically grounded and consensus-driven for the betterment of public health.”

In essence they are stating that medicine is to be consensus-driven, and anyone outside the group-think will be axed.

If you are a Lyme/MSIDS patient, please pause here and reflect.  Consensus-driven medicine outlaws anyone who has a different thought or approach in medicine.  Ponder history for just a moment:

Lyme/MSIDS of course fits perfectly into this picture as there are currently two standards of care with continued polarization that doesn’t appear to be changing. Doctors and researchers who do not “toe the line” and follow the antiquated and unscientific CDC/IDSA Lyme treatment guidelines are still being hunted down, persecuted, fined, and can lose their medical license. Wisconsin has a long history with tick-borne illness and represents the first published case in a medical journal. Further, an IDSA founder who was a Wisconsin physician, disagreed with the CDC/IDSA stance and regularly treated his patients with high doses of IV antibiotics for tick-borne illness. We are in the thick of this ongoing battle.

Unfortunately, Dr. Waisbren is no longer with us, but I’m eternally grateful for his, and so many others, willingness to defy consensus-based medicine – fully realizing that the human body is complex and variable. He, and many others, also fully realize that medicine is not nor ever should be “one size fits all,” and will require intelligence and savvy on the part of doctors in treating individual patients.  To show the seriousness of this, just today, there are allegations that a judge stripped a mother of her parental rights until she gets “vaccinated” for COVID.  This judge is not a medical professional and has no clue of her previous medical history of adverse reactions.  The world has truly gone mad.

I would further argue that what started out as “guidelines” have effectively become “mandates” which are preventing doctors from treating the individual.

Please remember that progress would not have been made if these fore-thinking people hadn’t defied consensus medicine. After all, science is continually evolving as evidence becomes available.

But herein lies the catch: evidence must be allowed to be gathered, debated, shared, and tested.

Now they are shuting down the very people who can, and have found a way out of COVID madness.

Of course, there are guilty people, but not the ones listed by our corrupt public health ‘authorities’, and complicit mainstream medicine, and media.  The FDA and CDC have attacked every single therapy and test presented by others, the latest of which is ivermectin, a cheap, safe, proven drug against COVID with the media playing along by twisting and omitting facts. Rather than focus on the fact ‘authorities’ are bad mouthing and preventing successful treatments, they focus on the fact that desperate patients with nowhere to turn are self-treating with the animal form of ivermectin and are taking too much.  Further, they are completely ignoring the thousands upon thousands who have suffered harm from the COVID jabs and would rather blame “anxiety” for causing anaphylaxis, blood clots, hemorrhaging, heart inflammation, strokes, Bell’s Palsy, convulsions, and myocarditis (among a host of other reactions) rather than the injections.

For 40 years Lyme/MSIDS patients have often been told they were simply imagining their illness.

Comments Off on True Colors of AMA, APhA & ASHP Show After Going on Warpath Against Ivermectin: Doctors Threatened Yet Again for Spreading COVID “Misinformation”