Federation of State Medical Boards Attacks Physicians Over COVID ‘Misinformation’ – Who’s Behind It?

Federation of State Medical Boards Attacks Physicians Over COVID ‘Misinformation’ — Who’s Behind It?

The Federation of State Medical Boards’ aggressive stand against “the dissemination of COVID-19 vaccine misinformation and disinformation by physicians” and its recommendations for disciplinary action have some critics questioning the organization’s motivation and the source of its authority and funding. 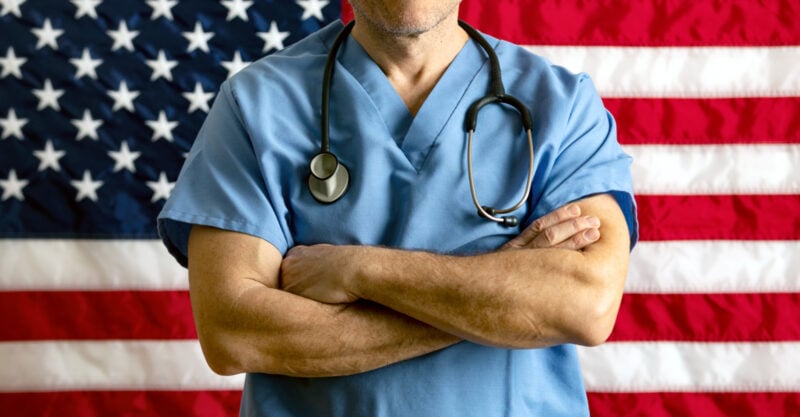 The Federation of State Medical Boards (FSMB) has taken a stand against what it refers to as “the dissemination of COVID-19 vaccine misinformation and disinformation by physicians and other healthcare professionals on social media platforms, online and in the media,” going so far as to recommend disciplinary action and state policy changes.

In a July 2021 press release, the FSMB warned physicians they could risk “disciplinary action by state medical boards, including the suspension or revocation of their medical license.”

And in a lengthier statement issued in April 2022, the nonprofit — which says it “serves as the voice for state medical boards” — appeared to advocate for laws like the one sitting on California Gov. Gavin Newsom’s desk that would punish doctors who share COVID-19 “misinformation” with their patients, with language like this:

“Prohibitions on disseminating misinformation are already expressly written, or implied, in many state statutes regulating the practice of medicine. However, adopting a specific policy on misinformation is encouraged in light of the increased prevalence of, and harm caused by, physician-disseminated misinformation in this ongoing pandemic.”

In yet another show of support for cracking down on “misinformation,” FSMB President and CEO Dr. Humayun Chaudhry will speak next week on “Misinformation in Health Care: The Implications for Professionalism and the Public Trust” at the American Board of Medical Specialties annual conference.

According to its website, the FSMB says it “supports its member boards as they fulfill their mandate of protecting the public’s health, safety and welfare through the proper licensing, disciplining, and regulation of physicians and, in most jurisdictions, other health care professionals.”

It also issues guidelines that serve as the basis for model policies with the stated goal of positively impacting the health and safety of patients and the medical regulatory system.

But some critics of the FSMB’s aggressive “misinformation” policy questioned where the organization derives its authority and who’s really behind it.

What is the FSMB — and who funds it?

Created in 1912 at a “small annual gathering of state board executive officers with no permanent staff or headquarters,” the FSMB today has almost 200 employees and two national headquarters — one in Texas and another in Washington, D.C.

Since its inception, the FSMB has been staffed with members who presently or previously held positions with other medical governing bodies.

In fact, FSMB’s leadership — in conjunction with the U.S. government — in May 1994 spawned another medical authority agency — the International Association of Medical Regulatory Authorities (IAMRA).

According to IAMRA’s website, the IAMRA was formed when “FSMB, under contract with the US Department of Health and Human Services (HHS), planned and hosted the 1st International Conference on Medical Regulation in Washington, D.C.”

FSMB and IAMRA share an office address in Texas. Their official phone numbers are nearly identical. And when a person calls the phone number listed on IAMRA’s website, the prerecorded welcome message tells the caller they’ve reached FSMB and IAMRA, in that order.

FSMB’s president and CEO, Chaudry, is also the secretary of the IAMRA. This overlapping of leadership positions extends beyond FSMB and IAMRA into medical councils in other countries.

For example, Dr. Emanuel Garcia, a psychiatrist living in New Zealand who publicly voiced concern about the Pfizer COVID-19 vaccine, noted in an Aug. 22 article for Global Research that the chair-elect of the IAMRA, Joan Simeon, “just happens” to be the CEO of the Medical Council of New Zealand.

Garcia, who questioned whether the FSMB and IAMRA’s true motivations were ensuring safe medical practices, said:

“In casting an eye over the years since the dramatic introduction of the COVID pandemic, the near total shutdown of the world, the immense transfer of wealth from the middle and poorer classes upwards, the universal imposition of an inadequately tested so-called vaccine, and the vehement suppression of critical early treatment, one cannot but conclude that there is indeed an agenda beyond health and welfare.

“The FSMB and the IAMRA have shown by their actions that they are tools whose task is to further this agenda, and that this agenda is both anti-medical and inhumane.”

In addition to contracting with the U.S. government and IAMRA, the FSMB runs its own foundation that functions as a separate 501(c)(3) organization but is supported by a “generous seed endowment” from the FSMB.

Last April, the FSMB foundation celebrated its 10-year anniversary by hosting its annual fundraising luncheon. Its annual highbrow luncheons have raised thousands of dollars to support the organization’s activities, including “the study of state responses to the COVID-10 pandemic.”

The FSMB foundation’s website does not disclose its donors.

Commenting on the FSMB’s July 2021 statement, “Spreading COVID-19 Vaccine Misinformation May Put Medical License at Risk,” Garcia said, “The outstanding question remains: Where does the FSMB derive its authority to regulate United States medical boards and, through its apparent international partner, the IAMRA, direct medical councils around the world to discipline doctors?”

Dr. Meryl Nass, an internist and biological warfare epidemiologist who had her medical license suspended in January for “spreading misinformation,” told The Defender the FSMB’s authoritative actions raise many questions.

Nass, a member of the Children’s Health Defense scientific advisory committee, outlined the questions in an email:

Nass suggested all of these questions should be investigated.

A history of ties to Big Pharma

Historically, there is evidence of Big Pharma funneling money to the FSMB.

For example, a decade ago, MedPage Today broke the story on how the FSMB turned to a pharmaceutical company with a $3.1 million request to underwrite the cost of producing and distributing a book about its opioid prescribing policy.

After the FSMB’s guidelines for the use of opioids to treat chronic pain patients were adopted as a model policy, the organization asked Purdue Pharmaceuticals for $100,000 to help pay for printing and distributing the policy to 700,000 practicing doctors.

The initial $100,000 was just a small downpayment on the $3.1 million the FSMB’s foundation estimated it would cost for its campaign to get out the word about the “safe” use of opioid analgesics in the treatment of chronic pain, according to MedPage.

The FSMB also has a history of challenging and attacking non-pharmaceutical medical approaches used by integrative doctors as falling outside the “standard of care” as they define it.

Dr. Christiane Northrup, a former board-certified obstetrician and gynecologist with more than 30 years of experience, told The Defender she intuitively sensed the FSMB had questionable associations and chose not to renew her medical license when it came up for renewal in 2015.

Northrup, who had shifted her professional activities away from directly seeing patients, said she asked herself, “Do I need this for what I’m doing now?” and concluded, “Let’s not renew this.”

Northrup pointed out the historical connection between pharmaceutical companies and the FSMB. She told The Defender that “what we’re talking about is a very carefully orchestrated attempt to control doctors.”

Many people who have been taught that “the doctor knows best,” Northrup said, cannot comprehend the “horror” of the implications of the FSMB’s actions.

The Defender reached out to the FSMB and the IAMRA for comment, but neither had responded at the time of this writing.

One person’s misinformation is another person’s truth.

This is certainly true in Lymeland. Science continually changes, is updated, and is debated (or should be and was until the tyrants made this impossible).

This article presents another clear example that we need to break the public health monopoly which has gotten completely out of control.  Doctors no longer treat patients – they simply follow orders from people and organizations who care more about power and profits than they do about patients.  Hopefully the past two years has opened up enough eyes to the power struggle that is only getting worse.  Independent doctors and private medicine that doesn’t receive government funding are our best hope.

Protest with your feet and refuse to be a part of the machine.

For more on the AMA:

For more on COVID ‘misinformation’:

Comments Off on Federation of State Medical Boards Attacks Physicians Over COVID ‘Misinformation’ – Who’s Behind It?

Plandemic 3 Set to Rock the World