Despite the misinformation spewed forth by Justice Sotomayor, The US Supreme Court has blocked the Biden administration’s vaccine-or-test rule for US businesses, but allows vaccine mandate for most health care workers. 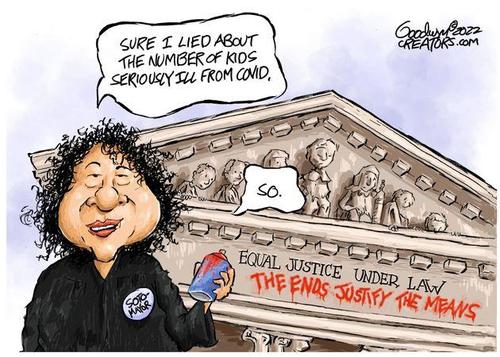 The National Federation of Independent Business (NFIB) argue against the Department of Labor, in the Court’s first hearing, that:

“OSHA’s sweeping regulatory dictate,” will “irreparably injure the very businesses that Americans have counted on to widely distribute COVID-19 vaccines and protective equipment to save lives—and to keep them fed, clothed, and sustained during this now two-year-long pandemic.”

The Occupational Safety and Health Administration (OSHA) rule would have required 80 million workers to get shots or periodic tests.

The OSHA ruling vote was 6-3 with Breyer, Sotomayor, and Kagan in dissent.  (See link for article)

Most Americans Will Get COVID Eventually, Says Fauci

— But chances of getting sick are “very, very low” if you’re vaccinated and boosted

WASHINGTON — Sooner or later, most Americans will wind up getting COVID-19, although it will likely be pretty mild for those who are vaccinated and boosted, a Biden administration official said Wednesday.

During a press briefing held by the White House COVID-19 Response Team, MedPage Today asked members of the team to elaborate on the remark that “most people are going to get COVID” made by Acting FDA Commissioner Janet Woodcock, MD, during a Senate hearing Tuesday. (See link for article)

Fauci finally tells the truth: COVID will NOT be eradicated and it is highly likely everyone will get it, like every other coronavirus, flu, and cold we haven’t eradicated. Logic would now follow that natural immunity would be preferred, yet our corrupt public health authorities who own the patent on the spike protein and on the injections have censored this well-known and accepted scientific fact and only push the lucrative, dangerous shots which have caused more damage than any other “vaccine” in the history of VAERS.

Logic would also follow that effective treatments are the best answer to something that is not going to be eradicated, yet corrupt public health officials have conveniently changed the definition as to what constitutes a “vaccine” to now include non-sterilizing, gene-therapy injections. With their tyrannical ‘top down’ approach, public health and mainstream medicine are in lockstep and doctors who dare to defy the accepted narrative are hunted down and persecuted.

What Fauci continues to spin; however, is that these fast-tracked, experimental injections which are NOT sterilizing, and don’t stop infection or transmission, are somehow protective against severe illness and death.  Boosters are quickly ineffective as well.

Further, another ‘slight of hand’ has ignored ‘absolute risk’ in calculating injection efficacy.  When it is taken into account, ALL of the shots are approximately 1% effective:  https://madisonarealymesupportgroup.com/2021/08/24/first-signs-of-what-scientists-fear-most-about-covid-jabs-german-physicians-examine-covid-vaxxed-blood-its-not-good/  Excerpt:

In a July 1, 2021, commentary in The Lancet Microbe,3 Piero Olliaro, Els Torreele and Michel Vaillant also argue for the use of absolute risk reduction when discussing vaccine efficacy with the public. They too went through the calculations, coming up with the following:

And Fauci will never admit in 1,000 years that horrific contaminants have been discovered by experts across the glob.

From the earliest days of the COVID pandemic, the PCR test has been a source of unrelenting controversy, with experts repeatedly pointing out that it’s not a valid diagnostic and produces inordinate amounts of false positives.

Importantly, a PCR test cannot distinguish between “live” viruses and inactive (noninfectious) viral particles. This is why it cannot be used as a diagnostic tool. As explained by Dr. Lee Merritt in her August 2020 Doctors for Disaster Preparedness1 lecture, media and public health officials appear to have purposefully conflated “cases” or positive tests with the actual illness in order to create the appearance of a pandemic.

Furthermore, a PCR test cannot confirm that SARS-CoV-2 is the causative agent for clinical symptoms as the test cannot rule out diseases caused by other bacterial or viral pathogens.

From the start, experts noted that a CT over 35 is scientifically unjustifiable,2,3,4 yet the U.S. Food and Drug Administration and the U.S. Centers for Disease Control and Prevention recommended running PCR tests at a CT of 40,5 and the World Health Organization recommended a CT of 45.

The pandemic of false positives was then used by world governments to implement pandemic countermeasures that have destroyed the global economy, ruined countless lives, decimated the education of an entire generation and stripped us of basic human rights and freedoms.

What the CDC’s belated admission means is that, for the past two years, Americans have unnecessarily wasted time in self-isolation — perhaps weeks — waiting for a negative test.

Time and again, the goal post for ending the pandemic theatre has been moved, and the justifications for continuing the life-destroying countermeasures have become increasingly laughable. The fearmongering over Omicron, for example, makes no rational sense based on the data available, which shows the variant is among the mildest so far, and far less likely to infect and damage the lungs.6

In the last days of December 2021, the U.S. Centers for Disease Control and Prevention issued yet another illogical protocol change.7 People who test positive for SARS-CoV-2, or have known exposure, but remain asymptomatic, now only need to isolate for five days rather than the previous 10, but should wear a mask for another five days when at work or in public. Also, they don’t need to get retested at the end of their quarantine. The stated reason? Because:

How is it that the CDC didn’t realize until now that the PCR test was picking up dead viral debris for three months after infection? The facts that the test, a) was far too sensitive, and b) couldn’t identify active infection, were criticisms from the start. What the CDC’s belated admission means is that, for the past two years, Americans have unnecessarily wasted time in self-isolation — perhaps weeks — waiting for a negative test.

In a December 30, 2021, appearance on MSNBC, Dr. Anthony Fauci responded to questions about the updated CDC guidance. CDC director Rochelle Walensky also tried to make sense of the new guidance in a December 29, 2021, ABC News interview (see videos above).12

Neither of them offered any explanation as for why the CDC didn’t change the rules sooner, and only now decided that keeping noninfectious people in isolation for days and weeks on end might not be so good after all.

The CDC has not given up on making the guidance as confusing as possible though. December 23, 2021, they also updated guidance for health care workers,15 stating that “Health care workers with COVID-19 who are asymptomatic can return to work after seven days with a negative test, and that isolation time can be cut further if there are staffing shortages.”16

In his MSNBC interview, Fauci was asked why health care workers are being treated differently, having to isolate for seven days rather than five, and still have to get a negative test, when the test can falsely remain positive for up to 12 weeks? What data supports this, and is it publicly available?

According to Fauci, the data to support this difference “is internal to the CDC,” but really, there’s “no specific data” to back it up, he adds. The CDC merely made “a judgment call.”

Double-Jabbed Treated the Same as Unvaccinated

“For people who are unvaccinated or are more than six months out from their second mRNA dose (or more than 2 months after the J&J vaccine) and not yet boosted, CDC now recommends quarantine for 5 days followed by strict mask use for an additional 5 days.

Alternatively, if a 5-day quarantine is not feasible, it is imperative that an exposed person wear a well-fitting mask at all times when around others for 10 days after exposure. Individuals who have received their booster shot do not need to quarantine following an exposure, but should wear a mask for 10 days after the exposure.

For all those exposed, best practice would also include a test for SARS-CoV-2 at day 5 after exposure. If symptoms occur, individuals should immediately quarantine until a negative test confirms symptoms are not attributable to COVID-19.”

Fauci defended the decision to treat the double-jabbed as if they’re unvaccinated saying that those who have received a booster shot have far greater protection against the Omicron variant, compared to those who have only received one or two doses.

“When you’re infected, you’re infected,” Fauci said, and it doesn’t matter whether you’re vaccinated or not. The viral load is the same, so the risk of spreading the infection is the same. Those who have been boosted are less likely to be infected or carry a large viral load, hence they don’t need to isolate.

PCR Cannot Tell You Anything About Contagiousness

Fauci was also asked about how one can measure contagiousness. If the PCR can register positive for 12 weeks after an infection, it can’t be a reliable indicator of infectiousness. This was precisely the point that Mullis, inventor of the PCR test, attempted to make in the video at the top with respect to PCR and HIV.

So, how can we tell if we’re infectious or not? Fauci confirmed that the PCR can only tell you there’s a presence or absence of viral fragments, not whether it’s an active infection, or whether you’re actually infectious. He did not, however, provide an answer to the question as to how one can measure contagiousness.

Yet another confounding factor in this mess is that the rapid test apparently doesn’t pick up Omicron very well.18 Your viral load needs to be very high at the time of testing in order for the rapid test to recognize it.

This admission came within days of president Biden’s announcement that the federal government will distribute half a billion free rapid tests to homes around the country in 2022.19

It seems like a waste of resources, seeing how Omicron is starting to take over, but who knows, maybe it will pick up the common cold instead, allowing the “case” count to remain high enough to keep the charade going.

The CDC’s belated admission that the PCR test can’t identify active infection raises another question: What does this mean for those who died with a positive test? Did they actually have an active infection? If not, should they have been designated as COVID deaths?

The obvious answer to the last two questions is, of course, no. The vast majority were likely false positives, and the real death toll from COVID-19 considerably lower than we’re led to believe. The CDC undoubtedly knew this all along, seeing how they’ve been relentlessly criticized for their recommendation to run the PCR at a CT of 40. They’re trying to pretend that they just realized this, but that’s simply not believable.

My daily newsletter is still free and content will be released on Mercola.com before anywhere else. After 48 hours the articles will be transferred to my Censored Library on Substack. To view any missed content, a private membership is available for a very minimal amount with a portion of proceeds going toward our health partners who are helping in the fight to protect our freedom of speech and your right to take control of your health:  https://www.mercola.com/censored-library.htm  You can access the article and videos in this link for a fee.

Lastly, both Fauci and Walensky lied under oath regarding VAERS COVID injection deaths.