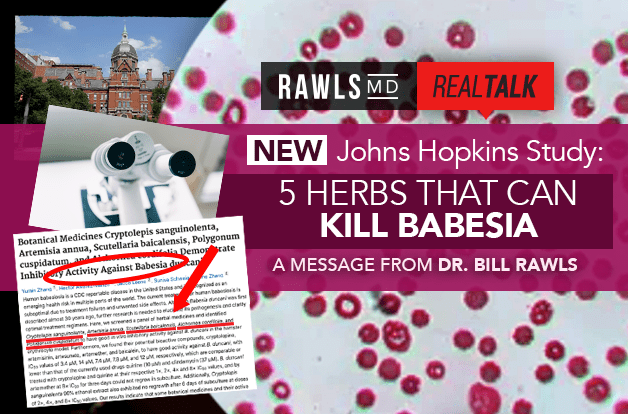 Babesia, a malaria-like parasite and protozoan, is spread primarily to humans through tick bites. Studies indicate up to 40% of people infected with Lyme disease are also infected with babesia, making it a relatively common coinfection. Though there are more than 100 different species of babesia, the ones most likely to pose a human health threat are Babesia microti, Babesia divergens, and Babesia duncani (WA-1).

Babesia lives and reproduces inside your red blood cells — a term known as intracellular. The tick-borne infection has a distinct ability to change its genetic presentation, allowing it to alter its physical form and function to adapt to disruptions in its environment, including antibiotics. Therefore, treatments for babesia may be suboptimal, unsuccessful, and cause several undesirable side effects, which underscores the need to find additional therapeutic interventions to address the persistent nature of the infection.

In March 2021, researchers from the Department of Molecular Microbiology and Immunology at Johns Hopkins Bloomberg School of Public Health in Baltimore, Maryland, evaluated the ability of 46 herbal remedies to combat babesia. The study included such herbs as cryptolepis, artemisia, alchornea, and more. And the results may surprise you.

In this video, Dr. Rawls explains which herbs proved most effective and discusses the importance of the study for treating babesia when conventional drug interventions fail to ease symptoms for many people. Discover more about babesia treatment here.

Hello everybody. Dr. Rawls here. I have an update on Lyme disease for you. So, last year, a group of researchers at Johns Hopkins University in Baltimore, led by Dr. Zang, released a study showing that herbs worked as well as antibiotics for killing borrelia. So they found that a group of herbs, which included some of our top herbs that we’ve been using for years, including Japanese knotweed, cat’s claw, Chinese skullcap, and among others, artemisia, clove, actually did as well as antibiotics for killing borrelia.

Well, they’re at it again; they just released a study on babesia, and they actually took some of these same herbs and others and compared them to antibiotics. Now, babesia is a protozoan; it’s a distant relative of malaria. And so, they had to grow the babesia in hamster, red blood cells, and then they used it — it was a test tube study, an in vitro study.

So they looked at the ability of both herbs and antibiotics to kill babesia. And they found that some of the commonly used antibiotics actually worked pretty well for babesia. But we know that these antibiotics had a lot of side effects. So they also tested a number of different kinds of herbs — a list of about 50. It was a long list, and they found that some of the same herbs that were effective for borrelia were also effective for killing babesia.

So top of the list? Cryptolepis. That wasn’t on the borrelia study, but we know that it is good for protozoa, and it has a pretty good range as an antimicrobial. So cryptolepis was one that we’ve been using more and more in our protocols, and it had very good activity — better than the antibiotics — against babesia. Other ones? Japanese knotweed. It’s really nice to see some of these same herbs on the same list doing well against different kinds of microbes, so Japanese knotweed was on the list. It had good activity.

Chinese skullcap had good activity. Artemisia, which was also on the babesia study, had good activity against babesia. And also alchornea. Now, there were other things on the list that didn’t perform quite as well, but they were still significant, like garlic and andrographis, which are some of our primary herbs that we use in chronic Lyme disease. So it was really nice to see this kind of result with the herbs and that the herbs perform as well as antibiotics.

Now, so, a couple of these, like artemesia, we don’t typically put in our primary protocol, or clove, because they have some toxicity. But seeing this type of benefit in some of these other herbs that are really commonly used and have very, very low toxicity. So the advantage of using herbs over any of the antibiotics is that herbs don’t typically kill normal flora so that you can use them for a long time.

And that’s what it takes. You really have to wear these things down over a long period of time. They have broad coverage. So it was really interesting to see that some of the herbs that worked for borrelia work just as well for babesia. And what that says is, herbs, in general, have really broad coverage because it’s not one chemical; it is a spectrum of hundreds of chemicals in the herb that have activity and have antimicrobial activity. So the fact that these same herbs are covering a bacteria and a protozoa says that they’ll probably cover a lot of other possibilities that can come with chronic Lyme disease.

And, so, when you put all that together: low toxicity, the fact that you can use them a long time, the fact that they have really broad coverage to kill a lot of microbes, and they don’t kill normal flora, which is really important, these things can be used as a primary arsenal against chronic Lyme disease in these bacteria that we’re, that we’re working with.

And it’s because it takes a long time. You know these bacteria are all intracellular. They live inside cells, and nothing really gets to them in the cells. It’s only when they use up a cell, when they cannibalize all the nutrients from the cell and emerge to infect other cells, that you have an opportunity to kill these things. So you have to keep the pressure on for a very long time, months, even years. And you can do that safely with herbs, where the toxicity that comes with a lot of the conventional antibiotics really prohibits that from happening.

So this is really valuable information to us. Now, we had a pretty good feel that herbs had some really nice antimicrobial coverage. This has been proven over time, but to see it specifically targeted toward the microbes that we’re dealing with with chronic Lyme disease is really, really exceptional information. So, that is all I have for you right now. And, so, go and take your herbs, and stay well. Take care.

Dr. Rawls is a physician who overcame Lyme disease through natural herbal therapy. You can learn more about Lyme disease in Dr. Rawls’ new best selling book, Unlocking Lyme.
You can also learn about Dr. Rawls’ personal journey in overcoming Lyme disease and fibromyalgia in his popular blog post, My Chronic Lyme Journey.

Comments Off on John Hopkins Study: 5 Herbs That Can Kill Babesia

What Are Treatments for Lyme Disease?