Doctors and scientists from major universities and medical centers on Wednesday told the U.S. Senate, during a hearing hosted by Sen. Ron Johnson (R-Wis.), what they described as a story of corruption and mismanagement of the COVID-19 pandemic.

By Josh Mitteldorf, Ph.D., The Defender 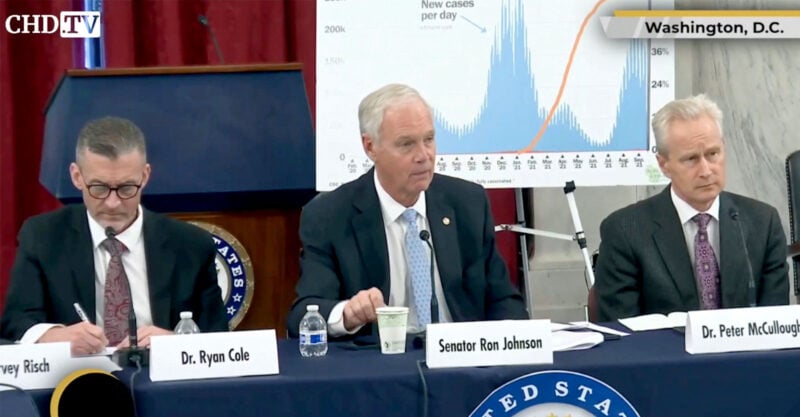 Hearings were held in the U.S. Senate Wednesday with distinguished doctors and scientists from major universities and medical centers. The story they told of corruption and mismanagement of the COVID-19 pandemic is a turning point for humanity.

Most of the people on the panel suffered loss of income, loss of status or loss of their jobs because they publicized truths about COVID-19 and COVID-19 policies that were anathema to the medical establishment and detrimental to pharmaceutical profits.

The reputation of science is based on open debate and logical evaluation of evidence. Debate has been stifled by people with money and power, and those same people then claim to speak for “science.”

The public is gradually recognizing the enormity of this fraud. I fear that public support for science will crumble.

Sen. Ron Johnson (R-Wis.) introduced the hearing by reminding us that promising drugs for early treatment of COVID-19 were made known to him by some of the people at Wednesday’s hearing already in the spring of 2020, and yet our government agencies were advising against their use, despite long and assuring safety records.

Here are some highlights from the speakers:

Aaron Siri, a lawyer for Del Bigtree’s Informed Consent Action Network, described how the CDC created a system called V-Safe for recording a large sample of vaccine safety data, and then hid the data from the public.

Siri pressed through the Freedom of Information Act to obtain that data for more than one-and-a-half years before some of it was released. Much still remains secret.

Risk of myocarditis, Guillain-Barré syndrome, and autoimmune disorders was recognized and reported early in the Pfizer trials, and these conditions were in early specifications for the V-Safe system. In the end, none of these conditions were included, suggesting that CDC made a deliberate decision not to create a paper trail for them.

Ed Dowd, a securities analyst, reported data from Group Life insurance policies that cover healthy, employed people ages 18 to 64. The death rate in this group jumped 40% in the third quarter of 2021, coincident with federal vaccine mandates for large employers who buy these Group Life policies.

The death rate for healthy, employed people is quite low, so the absolute number of deaths continued to be dominated by people who are old and sick. The overall death rate in America increased only a little during this time, but the Group Insurance companies took a big hit.

Josh Stirling, another security analyst, summarized data from Britain’s Office of National Statistics. To date, vaccinated people in the U.K. are dying at a rate 26% higher than the unvaccinated. The increase was concentrated in young people, who have suffered a 49% increased risk of mortality to date.

Lt. Col. Theresa Long, M.D., M.S. in public health, reported that alarming increases in disabling conditions for the U.S. Army were reported right after vaccination was mandated, and these signals were dismissed as a “computer glitch.”

The glitch was fixed, but disabling illnesses and injuries continue in the Army, where they are now occurring at almost twice the pre-vaccination rate of 2020. The number of military deaths from the COVID-19 vaccines is about 50% higher than the deaths from COVID-19 itself.

Dr. Ryan Cole reported that coronaviruses as a class mutate rapidly, and that’s why we have never had a vaccine for any coronavirus in the past. A largely vaccinated public drives the virus to mutate even faster. The current COVID-19 vaccines immunize against a variant of COVID-19 that was extinct more than a year ago.

Dr. Harvey Risch, Ph.D., emeritus professor of epidemiology from Yale, reminded us that for young, healthy people, the risk of serious COVID-19 is lower than the risk of injury from the COVID-19 vaccines.

Vaccine mandates can only be justified for vaccines that lower the risk of transmitting the virus, and the current vaccines do not prevent transmission, even in the old and vulnerable groups where they protect against serious COVID-19.

Dr. Pierre Kory specialized in pulmonary medicine and critical care as a professor at the University of Wisconsin before he was dismissed from its medical school for advocating early treatment for COVID-19.

He reminded us that early treatment has always been our best line of defense for everything from the common cold to cancer. (This includes the original SARS virus of 2003.)

Thirty percent of the world’s people live in countries where hydroxychloroquine or ivermectin is taken daily as preventives, and these countries have had much lower rates of COVID-19 mortality than the “developed world”, where these medicines were discouraged. Why were early treatments for COVID-19 disparaged by the authorities?

Dr. Paul Marik, with 300 peer-reviewed publications, is the second most published expert on critical care in the world. He estimated that hundreds of thousands of American deaths would have been avoided if hydroxychloroquine and ivermectin had been adopted as early treatments beginning in 2020.

He reported that in his hospital, he was forbidden from using safe, effective treatments for COVID-19, including vitamin C. Instead, he was encouraged to prescribe Remdesivir. Remdesivir is a patented antiviral drug and costs about $3,000 per patient.

But Remdesivir can only be administered in a hospital, and antivirals are useless by the time a patient gets to the hospital, because he is well past the stage where the virus has been vanquished, and the patient is threatened by its aftereffects, including lung damage, low blood oxygenation and sepsis.

Remdesivir is highly toxic to the kidney. According to the World Health Organization, Remdesivir increases the risk of kidney failure 20-fold. Marik claimed that there are no legitimate medical uses for Remdesivir, and yet federal reimbursement to hospitals is boosted by 20% (for the entire bill) if Remdesivir is included in the treatment plan.

“High-impact journals have been under the control of the pharmaceutical industry. …

“We’ve seen repeated cases of manipulation of the data to show that a company’s product is effective and, conversely, manipulated trials to try to prove to everyone that safe, effective repurposed drugs that offered no profit were ineffective or dangerous.

“There is an immense amount of corruption in medical publishing and in the conduct of science.”

Dr. Peter McCullough, Ph.D., MPH, is a heart specialist with a Ph.D. in epidemiology, and was a professor at Baylor College of Medicine before he was dismissed for his vocal stance on early treatment of COVID-19. America suffered 250,000 deaths before the COVID-19 vaccines.

Normally, the second year of a pandemic is milder, both because the virus evolves to be less deadly and because the most vulnerable people were killed in the first year. But since the vaccine rollout, we have had 750,000 additional COVID-19 deaths in America. This is not the record of a successful vaccine.

Paul Alexander, Ph.D., reported that the COVID-19 vaccines lose their efficacy and dip into negative efficacy after a few months, such that people who have been vaccinated are more likely to get COVID-19 multiple times. Vaccinated individuals only have immunity to the part of the virus that is mutating most rapidly.

As long as we keep boosting people every few months, the virus will continue to mutate and the pandemic will continue for many more years. “Had we not mass vaccinated, it is probable that we would have achieved herd immunity in the United States in the winter of 2021.”

Dr. Robert Malone, who holds the patent as the original inventor of mRNA technology, changed his perspective on the COVID-19 vaccines after he had a near-fatal response to vaccination. Vaccine development is a very slow process, and viruses mutate rapidly.

This very promising idea has not panned out, but those who are heavily invested in the paradigm refuse to recognize the failures and the danger of mRNA vaccine technology.

Malone described the innovation of using pseudouridine instead of natural uridine as one of the four nucleotide bases in mRNA vaccines. This is a trick that causes the body not to degrade mRNA as it normally would, so the mRNA stays around much longer.

The upshot is that once the body is injected with an mRNA vaccine, the mRNA stays around and continues to generate spike protein for at least 60 days.

We have no data beyond 60 days, so it is “at least” 60 days. The vaccine was designed to do its job of stimulating immunity in the first 48 hours. After this, the continued production of spike protein serves no protective purpose, but it can continue to be toxic.

Janci Lindsay, Ph.D., professor of toxicology, reported on the vaccines’ effects on fertility, and evidence that the mRNA can incorporate into the genome and be passed through sperm or egg to the next generation.

As long as the mRNA is turned into DNA, it can be passed to the next generation through plasmids in the sperm. The spike protein might become a part of the human genome.

David Wiseman, Ph.D., pharmacologist from Johnson & Johnson, told us that the U.S. Food and Drug Administration (FDA) has strict standards for safety testing of “vaccines” and much stricter standards for “gene therapies,” including 5 to 15 years of follow-up for cancer and DNA damage.

The FDA did not even apply the looser “vaccine” standards when evaluating the COVID-19 vaccines, even though these mRNA products meet the definition of “gene therapies.”

Cole reported on the change in definition of “vaccine” that made possible the approval of the mRNA products, which have a very different mechanism from traditional vaccines. They should have been tested with standards appropriate for gene therapies.

McCullough emphasized that immunity provided by the COVID-19 vaccines does not extend to the nose or throat, so that vaccinated people are exhaling a viral load that is no different from unvaccinated.

This is why the current crop of vaccines cannot stop transmission, and why any argument for mandating vaccination as a public health measure is flawed. “These vaccines have no support for reducing transmission of the infection.”

NB Data from the Pfizer trial showed a higher death rate among the vaccinated compared to the control group.

Malone and Alexander raise the subject of “original antigenic sin.” In teaching the body to respond to just one part of the virus with one arm of the immune system, we hijack the body’s response when a COVID-19 virus comes along a few months later that has a mutated spike protein.

The immune system is fixated on the original spike protein, and its response to the altered virus is impaired. This is a well-known mechanism for several decades, so we should not be surprised when COVID-19 vaccines show negative effectiveness after a few months.

The Real Agenda Behind the American Academy of Pediatrics: Weaponizing Children’s Mental Health and Vaccines for Profit