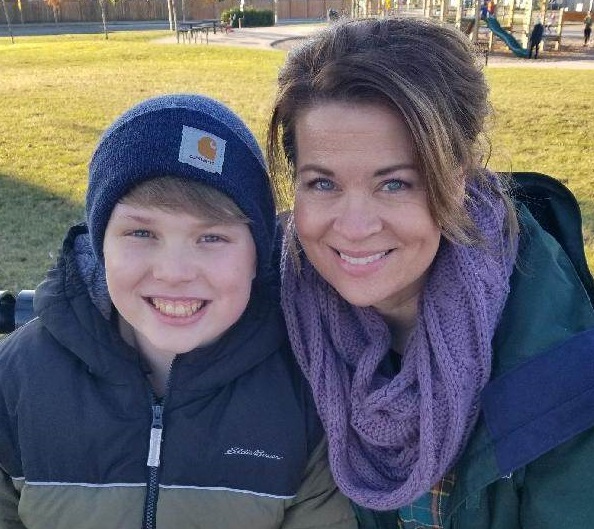 It can be tough to be a kid when your mom has chronic Lyme disease. Jessica Devine and her 14 year old son Parker know all about that.

Jessica was bitten by a tick and started having serious health issues when Parker was four years old. She recently posted the following on Facebook:

When he was 6, I remember being home alone with him and was about to have a seizure. I had to guide my little boy in the dark to take a flashlight and go next door to where my parents lived (in the country—so scarier) to get help. He was so brave!

He used to keep checking on me when I would have to take supervised baths wearing a bathing suit so he knew to go get help if I needed it. 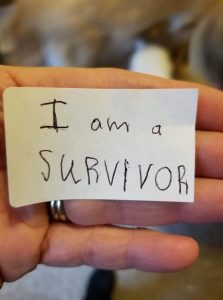 He knew what things to grab for me when I couldn’t help myself. I have a video when he was 8 and he could name all of my co-infections. I was shocked he paid that much attention. He would make me bracelets that said “brave” on them. Instead of placing “kick me” stickers on my back, he would write I AM A SURVIVOR.

He has witnessed some awful stuff as a child of a parent with Lyme. He is beyond special. Kind and compassionate and ALWAYS the first to know if something is wrong with me, even now at almost 14 years old. I cherish who he is.

His assignment for school was to write a poem. Last night he said “Mom, can you come to my room?” So I followed him, sat down, and he read me this poem. I was speechless and cried. We hugged a long time.

I hate Limes…
just the word makes me sick.
They don’t taste necessarily bad but,
they just… I don’t know…
but I do know that I hate them…
They are like budget lemons. Too scared to
be sour enough. Always, “Lemon-lime Drink”
Why not “Lemon Drink” or “Lime Drink”?
Just make up your mind already!
The color isn’t even that nice, it’s the color of barf.

A Lime is the broken alarm clock that needs an alarm clock to wake up on time.
A Lime feels like a glass of lukewarm water on a hot summer day.
A Lime is the friend in the group that is just there for the popularity…
and that it is what makes it petty.
It doesn’t try to get better… it just tears down everything around it.
Trying desperately to “get what it wants”
What is it trying to do then huh?

It ain’t trying to do anything? But it takes the lives of so many… so many…
INNOCENT PEOPLE
Who have nothing but hope and those like them.
BECAUSE THE DOCTORS DENY THEIR PROBLEMS ARE REAL
They deny that the Limes are there because they hide.
And because the doctors “aren’t good enough to look”
And those innocent people usually can’t even find the Limes until it is
TOO LATE.

But I guess I am lucky because I get to hate limes.
Me and my loved ones are here on this planet long enough to hate those limes.
And even though I am just one small piece of hope in the big picture,
It still hurts to hear when people so young are challenged so fast.
And sometimes the survivors need to help those who can’t help themselves.
Together.
Because they have hope,
because they have knowledge,
and because they have love…
Did I mention that I hate Lyme?

Jessica contracted Lyme disease while living in California. She now lives in Washington state and runs the RISE ABOVE LYME support group on Facebook.

TOUCHED BY LYME is written by Dorothy Kupcha Leland, President of LymeDisease.org. She is co-author of When Your Child Has Lyme Disease: A Parent’s Survival Guide. Contact her at dleland@lymedisease.org.

Like so many patients, Jessica refuses to stay down but turns Lyme into Lymeaid by educating those in the state of California where she lives.  And like so many children of parents with Lyme/MSIDS, Parker has chosen to be a voice in the darkness.