Welcome to the Real World, Where Knowledge About COVID Shots Not Protecting Against Transmission is Old News 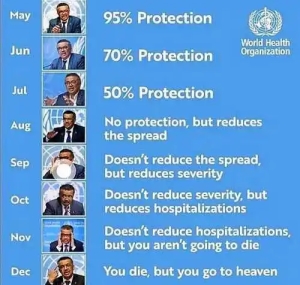 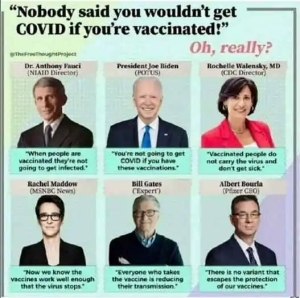 GBN News (Britain) interviews Laura Dodsworth, author of A State of Fear and she states people have had their “fingers in their ears” as the seemingly “new” news that the COVID shots do not protect against transmission was in the actual trial data and Peter Doshi wrote about it in the BMJ.  The shots weren’t tested for reduction in hospitalization, death, or transmission, rather they were tested for reduction in severe symptoms – which is not the proper endpoint for “vaccine” efficacy.

Dosworth points out the extremely polarizing message: on one hand Disney & Marvel are pushing the jabs while on the other side of the country a highly respected medic states “we don’t recommend them.”

An important detail was mentioned: “vaccination” decisions are personal and should be respected.

“there should be zero [COVID] measures ever again.”

We have up to two years’ worth of data on most of the measures, and NONE has proven fruitful.

Instead, they’ve all been shown to be harmful — to economic stability, mental health, physical health, education, life expectancy, quality of life and more. Many masks are carcinogenic, as they and plastic barriers are worthless against viruses, impede oxygen and air-flow, and harbor bacteria the wearer continues to breathe. Lockdowns did irreparable harm that will continue to be felt and did nothing to help.

The global response has been nothing short of disastrous, and following the same playbook is insanity.

Kim Iversen poked holes in the arguments given by many to vilify the unvaccinated.  She points out the COVID shots waning immunity as well as breakthrough infections (infections in those who were were “vaccinated”)

This article is a good read regarding the new phenomenon of those waking up to the mRNA shots causing adverse reactions.  The author states there are three types of people and they should be handled differently:

Welcome, to the real world

Welcome, to the real world. So you just heard it from the horse’s mouth, Pfizer never tested the vaccines for reducing transmission. Now that you’re here, there are a few other things you should know.

Firstly, it’s true. Pfizer didn’t test the vaccines for reducing transmission, and the regulators knew this. If this was your understanding of the vaccine, it’s because official public messaging, even from the World Health Organization, conflated vaccination with reducing transmission. It would reduce transmission they suggested, “if we all get involved.” No such tests had been done, but I’m sorry to tell you it’s much worse than that…

But there is a fatal problem with this data, and lots of policy was based on it. That data you can see up there, the main argument for the vaccine passports, the vaccine mandates and all the terrifying media campaigns comes from a fraudulent study.

What does that mean exactly? The investigators were forging documents, forging signatures, changing diagnoses, and unblinding the patients. A whistleblower saw it all, took pictures, took notes, and took the story to the British Medical Journal. They published it. Read that all again. The investigators on that absolutely critical Pfizer trial were forging documents.  (See link for article)

Anyone reading the information on this website has known this information a long, long time ago.

The author clearly points out that the evidence (graph) Pfizer is using is worthless until we get to the bottom of the fraud case, which is ongoing and which the BBC and mainstream media didn’t report on at all proving that Big Media is complicit in all of this.

He also points out that when credible people attempted to inform the public they were silenced.  Go to the top link to hear the author interview the whistleblower.

While the debate over what the “vaccine” was tested for is important, even more important is the massive ongoing legal case over the claims of fraud.

Knowledge About Lack of Protection Against Transmission is Old, Not New

The admission by a Pfizer exec has set social media ablaze with shock. That’s what you get when you suppress inconvenient truths. Now the flawed policies must be reversed or rescinded.

Please read this all the way through. It’s infuriating, I know. BUT – this is why I’m asking you to (1) upgrade to Paid and (2) share EVERY ARTICLE in real time.

Popular Rationalism applies reason and logic to real-world events. In this dystopian time of messaging, you’ll be a year ahead on the misinformation. This proves it.

Just when public trust in Public Health could not get lower, it fell of the crapper and into the fire.

With the EPOCH Times’ headline, “Pfizer Exec Concedes COVID-19 Vaccine Was Not Tested on Preventing Transmission Before Release”

comes the Orwellian tale of “we never did the studies because we had to move at the speed of science”. Seriously, you can’t make this up…

Pfizer’s Janine Small, president of international developed markets, said in response: “No … You know, we had to … really move at the speed of science to know what is taking place in the market.”

“…Roos, of the Netherlands, argued in a Twitter video Monday that following Small’s comments to him, millions of people around the world were duped by pharmaceutical companies and governments.

‘Millions of people worldwide felt forced to get vaccinated because of the myth that ‘you do it for others,’‘ Roos said. ‘Now, this turned out to be a cheap lie’ and ‘should be exposed,’ he added.”

“The Food and Drug Administration wrote in late 2020 that there was no data available to determine whether the vaccine would prevent transmission and for how long it would protect against transmission of the SARS-CoV-2 virus that causes COVID-19.”

‘At this time, data are not available to make a determination about how long the vaccine will provide protection, nor is there evidence that the vaccine prevents transmission of SARS-CoV-2 from person to person,’ the agency specifically noted.

Hold the phone there, because my ally from the UK, John Stone, and the internet, remembers things a bit differently (the links provided are from John, the descriptions and quotes are pulled by me):

By Sept, 2020, the goalposts had already been moved to hospitalization, per the NY Times, which nudged:

“If you were to approve a coronavirus vaccine, would you approve one that you only knew protected people only from the most mild form of Covid-19, or one that would prevent its serious complications? The answer is obvious. You would want to protect against the worst cases.”

The WashPo got serious about this, warning that actually studying transmission rates (which track rates of mild or asymptomatic disease) should not be done:

“A close reading suggests the clinical trials have been designed to ensure the greatest possible success for these candidates — and that could overstate their effectiveness. In both the Moderna and Pfizer trials, for example, the primary objective is to prevent any occurrence of covid-19, not necessarily a severe case. Preventing serious illness is a secondary objective.”

“Even as the first vaccines become more widely available they may be only partially protective to reduce severity of illness and won’t stop transmission anyway so we won’t need to pay people for that purpose,” he told MedPage Today. “So I don’t foresee a reason to pay anyone to get vaccinated against COVID-19.”

“So instead we are heading for vaccines that reduce severity of illness rather than protect against infection, provide only short lived immunity, and will at best have been trialled by the manufacturer against placebo. As well as damaging public confidence and wasting global resources by distributing a poorly effective vaccine, this could change what we understand a vaccine to be. Instead of long term, effective disease prevention it could become a suboptimal chronic treatment. This would be good for business but bad for global public health.”

John Stone also reminded BMJ about the lack of effectiveness that was being reported.

Now back to Epoch Times storyline:

“Meanwhile, Pfizer CEO Albert Bourla, around the same time, said his firm was ‘not certain’ if those who receive its mRNA vaccine will be able to transmit COVID-19 to other people.

‘I think this is something that needs to be examined. We are not certain about that right now,’ Bourla told NBC News in December 2020 in response to a question about transmissibility.

Former White House medical adviser Dr. Deborah Birx in June revealed that there was evidence in December 2020 that individuals who received COVID-19 vaccines, including Pfizer’s, could still transmit the virus.

“We knew early on in January of 2021, in late December of 2020, that reinfection was occurring after natural infection,” Birx, the White House COVID-19 response coordinator during the Trump administration, told members of Congress this year.

Enter the Faucists (My Subheading, Not ET’s)

A number of officials in the United States and around the world had claimed COVID-19 vaccines could prevent transmission. Among them, President Joe Biden in July 2021 remarked that “you’re not going to get COVID if you have these vaccinations.”

“Chief Biden administration medical adviser Anthony Fauci in May 2021 said in a CBS interview that vaccinated people are ‘dead ends’ for COVID-19, suggesting they cannot transmit the virus. ‘When you get vaccinated, you not only protect your own health and that of the family but also you contribute to the community health by preventing the spread of the virus throughout the community,’ Fauci said.

Epoch times goes on to report that by July Fauci, Walensky and the other Faucists were admitting no protection against transmission.

Remember that time when we swore in a President with no crowd, waiting for a vaccine that didn’t work, while Pierre Kory and Peter McCullough and others were yelling from the rooftops that early treatments work?

California has criminalized misinformation from doctors. Fine. Turn in the doctors that tell you lies about COVID-19 vaccines. Ask them who is at greater risk of infection, and if they lie, turn them in.

We need to reverse any and all policies that have led to forced vaccination. The Military. Healthcare workers. Colleges. Front-liners. And everyone who lost their jobs due to refusal to obey should be given their jobs back with back pay. And compensation for any financial distress caused by their job loss.

You saw it all happening, chronicled right here in real time on Popular Rationalism.

Remember, Fauci was peddling a second lock-down in November in a last-ditch effort to win the argument on Federal vaccine mandates, after pitching Omicron as “dangerous”.

I predicted in that article no further lockdowns.

We saw increased risk of infection in the vaccinated here, in many, many articles.

Forbes was lying to us as well.

And it was in November when they approved boosters based on no data.

And real-world data showed no protection.

And CDC tried to hide breakthrough infections – it didn’t work.

Comments Off on Welcome to the Real World, Where Knowledge About COVID Shots Not Protecting Against Transmission is Old News

More Experts: “Climate Change” is a “Lie & a “Scam” & Green Energy Policies Have Made the Climate Worse