By Pat Smith, President of LDA

If you think government agencies have softened their position against Lyme disease patients, perhaps you did not watch the 2nd meeting of the last term of the Working Group (WG) Feb. 28 – March 1.

The law creating the Working Group (WG) under the Federal Advisory Committee Act (FACA), requires at least two meetings to be held per year, but in 2021 only one meeting was held, and in 2022, the meeting devoted about 5 out of 9 total meeting hours to report presentations from regular subcommittees. Subcommittees consist of a number of individuals including researchers, medical providers, government entities, advocates/patients plus WG member Co-Chairs. Subcommittee members often devote many hours to the task of providing a report with findings and also with recommendations for the WG—recommendations which may/may not be adopted in some form by the WG for inclusion in the upcoming 2022 WG Report to Congress.

This subcommittee presentation to the WG was led by two WG member Co-Chairs: NIH representative, Dennis Dixon, Chief of Bacteriology & Mycology Branch, NIAID; and Sunil K. Sood, MD, pediatric infectious disease, Chair of Pediatrics South Shore Hospital−neither being a stranger to Lyme disease, nor having a track record of openness to recognizing chronic Lyme or treatment for it; a situation leaving tens of thousands of people without treatment recourse for decades.

According to the NIH (Tick-Borne Disease Working Group: 2020 Report to Congress), “Bacteria cause most tickborne diseases in the US, with Lyme representing the vast majority (82%) of reported cases.” The NIH is one of the most powerful government agencies with a huge budget, a budget which includes clinical trials, although few trials have been devoted to Lyme disease− three placebo-controlled trials on prolonged antibiotic treatment. As the 2020 WG Report indicates (chart below), Lyme ranks below leprosy in number of trials for infectious diseases.  Lyme is a research disadvantaged disease. According to CDC, there are 150-250 cases of Leprosy per year in the US, and it is curable with antibiotic treatment; yet CDC’s estimate indicates 476,000 individuals are treated annually in the US for Lyme. Research shows up to 20% or more with Lyme go on to develop persistent symptoms after treatment. 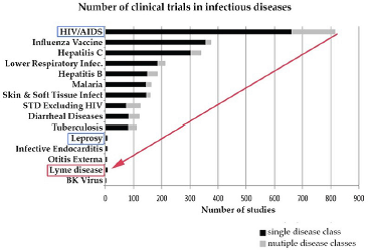 The NIH grant review selection process for researchers for Lyme disease has long been held by many to be flawed. An excerpt from Congressional hearing testimony presented on the NIH grant process by Lyme researcher S. Barthold, PhD, at the first Lyme hearing in the “House Committee on Foreign Affairs, Subcommittee on Africa,  Global Health and Human Rights,” 2012, states:

Because of firmly entrenched opinion within the medical scientific community, evidence of persisting viable but non-cultivable spirochetes is slow to be accepted, and research proposals submitted to NIH that feature persistence following treatment are likely to receive prejudicial peer review in the contentious environment of Lyme disease*. Negative comments by peer reviewers of grant applications in the current financially austere NIH climate result in unfundable scores, if they are scored at all (triaged). I have no personal stake in this issue any more, as I am retiring within a year. *a major weakness cited by a peer reviewer in a recent unfunded R01 application: “The lay public that has so far denied the validity of scientific data will misunderstand the significance of… [persisting non-cultivable Borrelia burgdorferi]…and use it as additional evidence to support the idea of treatment-resistant Lyme disease.

WG Treatment Sub Committee Co-Chair Dr. Sood’s Lyme publications include being coauthor of the “Clinical Practice Guidelines by the infectious Diseases Society of America (IDSA), American Academy of Neurology (AAN), and American College of Rheumatology (ACR): 2020 Guidelines for the for Prevention, Diagnosis and Treatment of Lyme Disease,” (Clinical Infectious Diseases, 2021), and of “Antisocial and ethical concerns associated with advocacy of Lyme disease,” (Lancet, 2011) the latter which says in part,

Advocacy for Lyme disease has become an increasingly important part of an antiscience movement that …supports unproven (sometimes dangerous) alternative medical treatments. …some portray Lyme disease, a geographically limited tick-borne infection, as a disease that is insidious, ubiquitous, difficult to diagnose, and almost incurable; they also propose that the disease causes mainly non-specific symptoms that can be treated only with long-term antibiotics and other unorthodox and unvalidated treatments….

The Lancet article goes on to describe Lyme advocates as “Similar to other antiscience groups” creating “alternative selection of practitioners, research and publications….” Advocates have even “coordinated public protests,…and spurred legislative efforts to subvert evidenced based medicine and peer reviewed science….actions of some advocates… pose a threat to public health.” [my emphasis]

Thus, I was much surprised to see Dr. Sood volunteer to serve and to have been chosen to serve on the WG−a body whose impetus, and structure was created by those “antiscience” advocates, whose actions dare to publicly & peacefully protest dogma, whose existence threatens public health, and whose impetus created and got passed into law the legislation creating the very TBD working group whose purpose is then presumably, according to his Lancet article, to subvert peer-reviewed science.

From the slide listing the treatment subcommittee composition, many whose past stances scream “no chronic Lyme/no treatment for chronic patients” to the slide titled “Areas of Discussion” which relegates Lyme disease treatment to the last of 7 bulleted areas– a scenario which does not consider the needs of the main stakeholders, the patients, is created to marginalize Lyme disease.

Although CDC indicates that 476,000 people seek treatment annually in the US for Lyme disease, which constitutes 76% of all tick-borne diseases (TBD), it has been clear for decades to the Lyme community and continues to be hammered home by the so called “experts,” they particularly don’t want to recognize or want to help the 20+ % who go on to develop chronic disease/chronic symptoms. To ensure this message was conveyed to the WG, these Co-Chairs presented to the WG that no outside experts were chosen to present to the Subcommittee. None were needed. The Subcommittee members were the experts. A quote from author Douglas Preston is my polite way to address this situation, “Hubris and science are incompatable.”

The stage was set, however. The signal was given to the entire Working Group: This Subcommittee, according to its WG Co-Chairs, neither wanted nor needed advice or guidance from anyone whose research/opinions might differ from theirs. Who would dare challenge these “experts” −a common form of intimidation in the world of Lyme disease, used on the Working Group? Another tactic to quash any WG public discussion was revealed through a WG member question after the presentation−the Subcommittee had never provided its presentation in advance to the WG. These professional “experts” had ~6 months to prepare and provide the material for the WG so that the important FACA process could be carried out —a public, transparent, and informed discussion of the results of this subcommittee report—a report so damaging to Lyme patients.

It was also revealed later in the WG meeting that other Subcommittee presentations were not provided to the Working Group beforehand. Where were the two Working Group Co-Chairs who had a responsibility to ensure Subcommittee reports were provided to the WG? If they did not hold the Working Group members accountable for providing material for public meeting discussion, who will do it moving forward?  Were they afraid to challenge their fellow WG members who co-chaired this or any other subcommittee and who had had ~6 months to prepare the product?

Lyme patients need people who provide accountability, not silence. It is no secret that WG members are chosen by the government agencies, and thus most likely, also the Co-Chairs. Last term’s WG was a perfect example of how Chair behavior influences the process. The idiom, if the cats away, the mice will play, is often quite valid, and it may apply to the present WG.

I had served on the WG for 2 terms, and I question:

I wonder what kind of discussions and/or activities took place behind the scenes, if any. Except for some questions from Dr. Maloney on the Treatment Subcommittee content, no one questioned this Subcommittee’s decades old rhetoric that there is no science supporting chronic Lyme or extended treatment, that IDSA guidelines provide the only answers to treatment, that pathogenesis research must be provided before addressing treatment (conveniently not mentioning Lyme has been around 4+ decades for pathogenesis studies and that their NIH grant process has often precluded studies which might have provided answers or broad brushed study conclusions of clinical trials).

More disturbing, no one questioned the use of only the Infectious Diseases Society of America (IDSA) Lyme treatment guidelines several times in this report—Guidelines both CDC and NIH have publicly professed their distance from in the past. If this were indeed a balanced presentation on Lyme treatment, the International Lyme & Associated Diseases Society’s (ILADS),  “Evidence Assessments and Guidelines Recommendations in Lyme Disease: The Clinical Management of Known Tick Bites, Erythema Migrans Rashes and Persistent Disease” Expert review of Anti-infective Therapy, 2014,  should also have been referenced in this subcommittee presentation, yet were not. Where were the voices of the WG patient advocate members to question this bias? I heard none, although I did hear at the end of day one comment from one of them that the presentations were “fabulous.” Perhaps someone should poll the patients to see if that’s how they see it.

Bottom Line: Who Will Help Our Patients?

WG Members, I ask you to remember the Lyme patients—of course all the tick-borne disease patients—but their diseases generally lack the controversy and certainly the vitriol that has faced Lyme patients for decades from the same “experts.” Your presence on the WG is guaranteed; we can see you, but we can’t hear you−only a deafening silence fills the void, silence that continues to sicken, disable, and kill our Lyme patients.

LDA Note: Thanks to James Berger, HHS, for quick reply to inquiry on when the video of meeting will be posted and reasons for that time frame: about 1 month on TBDWG webpage. https://www.hhs.gov/ash/advisory-committees/tickbornedisease/index.html

Hopefully this article educates you on what goes on behind the scenes, and clearly shows why Lyme/MSIDS has stagnated for over 40 years and shows no signs of changing.

What we have experienced with the COVID debacle in the past two years is part and parcel of Lymeland for decades.  We need an overhaul of public health and research in general and until that happens, we are shouting at the mountain.

Comments Off on Last WG- Helping or Hindering Lyme Patients? You Decide