Dr. Walker at TBDWG Meeting- Sick Patients Who Want to Get Treated Believe in Persistent Lyme ‘like a Religion’

In a grand stroke of irony, Wednesday’s online meeting of the Tick-Borne Disease Working Group began with a recitation of the panel’s “core values.” These supposedly include “respect, honesty and integrity.”

However, those qualities were in short supply that day. The meeting rapidly devolved into what looked like a street fight. Co-chair David Walker and IDSA representative Eugene Shapiro did their best to beat up the panel’s only patient representative, the Lyme Disease Association’s Pat Smith.

(Admirably, Pat held her own and even picked up support from unexpected corners. Maybe the others didn’t like the bullying they saw?) 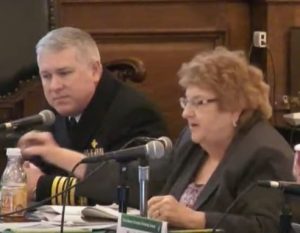 Whenever Pat or others presented anything that mentioned “persistent Lyme,” for instance, the pair attempted to shut it down. (“This is nonsense!” wrote Shapiro on one section displayed on our computer screens.)

He and Walker wanted to dump into the nearest trash bin anything that suggested that the IDSA Lyme treatment guidelines are less than perfect…or that research on animals has any validity at all when it comes to discussing persistence of the Lyme bacteria…or whether the possibility of persistent Lyme infection should even be considered by researchers.

The NIH has not funded a clinical trial for treatment of persistent Lyme disease in over 20 years, yet the pair dismissed studies advanced in the meeting as “too old” to be useful. 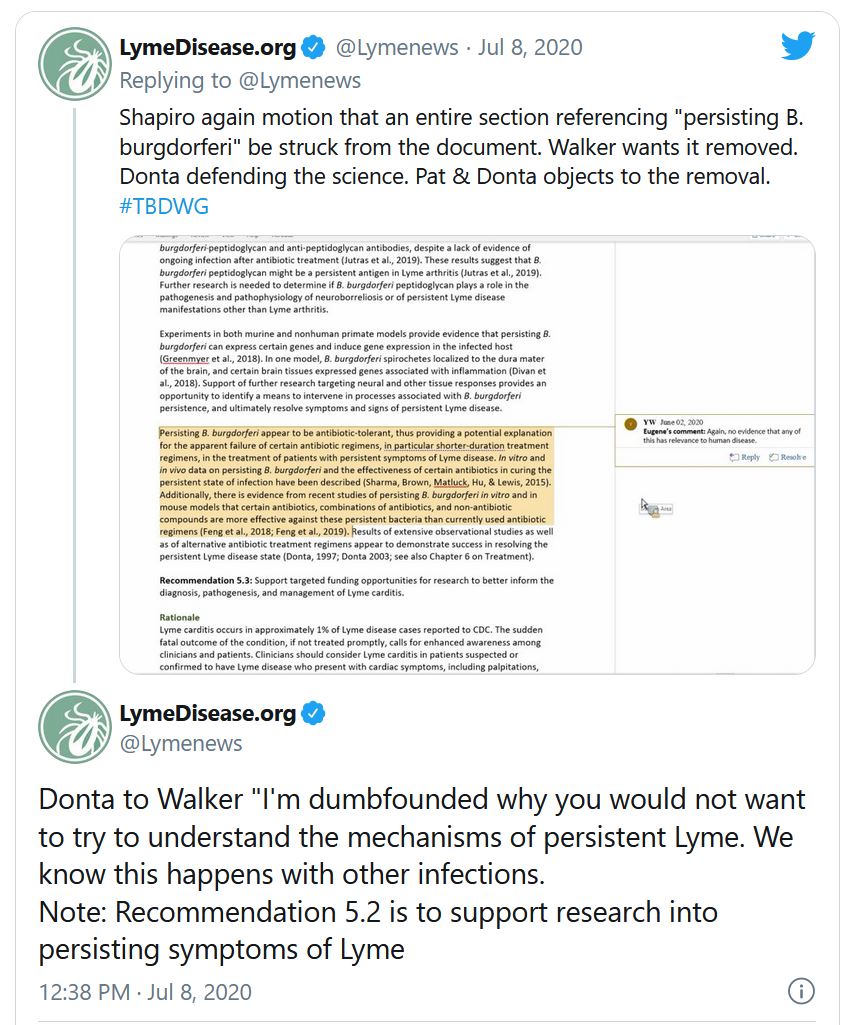 Shapiro and Walker operated as a tag team throughout the meeting. Shapiro, for anyone who has just tuned into this weird bit of performance art, is a lightning rod in the Lyme community, because he ridicules our patients, testifies against the physicians who treat them, and has extensive financial conflicts of interests. Since he was named to the panel in 2019, more than 38,000 people have signed a Change.org petition to remove Shapiro from the Working Group.

Response from Health and Human Services to this request: CRICKETS.

Walker is an expert in rickettsial infections—not Lyme disease. At the first meeting of this Working Group in 2019, he announced that Lyme disease did not need to be included this time around because it had “already been covered” in the previous session of the TBDWG. Instead, he wanted this group to focus primarily on his issue—rickettsia—and other tick-borne conditions.

(For the record, LymeDisease.org does not oppose the study of other tick-borne diseases and conditions. Of course not! But more than 80% of the tick-borne disease cases in the US are Lyme disease, the numbers are drastically increasing, and there is a pressing need for new diagnostics and treatments. Consequently, we feel Lyme deserves the lion’s share of the Working Group’s attention.)

Despite Walker’s argument to the contrary, at that first meeting, it was agreed that Lyme disease would be included. Specifically, access to care, cost of treatment, and lack of insurance coverage would be part of the mandate for the Training, Education, Access to Care, and Reimbursement Subcommittee. This subcommittee, chaired by Pat Smith, included LymeDisease.org’s CEO, Lorraine Johnson, as well as Dr. Betty Maloney, who educates doctors about tick-borne diseases. Basically, they were looking at what makes it so hard for patients with long-term Lyme disease to get appropriately diagnosed and treated. After lots of research and discussion, the subcommittee prepared a 75-page report with 45 pages of citations.

The TBDWG uses a platform called SharePoint for commenting on each other’s work. While reports from other committees received minor comments, Pat noticed that her chapter was being gutted and rewritten. All of this occurred behind closed doors—outside of the public oversight provided by the Federal Advisory Committee Act, known as FACA. (This law governs the behavior of federal advisory committees, emphasizing open meetings and public involvement.)

“Time went by with no response to my objection, so I reluctantly decided to proceed with filing for resolution through a FACA complaint. But I was subsequently informed my concerns were heard, and all discussion would now be in public, as we are doing today so I did not proceed with the complaint.”

So, if Pat Smith hadn’t been such a bulldog about this—if she hadn’t known the FACA rules and insisted they be followed—that messy “street fight” might never have happened. As it was, the community as well as the other members of the Working Group got a glimpse of those two guys flashing their true colors—warts and all. This included Walker saying that sick patients who want to get treated believe in persistent Lyme “like a religion.”

Sunshine as a disinfectant

Of note, towards the end of the meeting, on two occasions, Walker made motions that the Lyme community would view as contrary to our benefit. Both failed to even get a second and never came to a vote.

This is why they say “sunshine is the best disinfectant” for power plays taking place behind closed doors. It is why FACA requires public meetings so that panel members can be held accountable for their actions. It is why the Lyme community insisted on FACA rules when we pushed for the legislation that created the Working Group.

This is not over, of course. The next online meeting will be in mid-August. Stay tuned.

And these are the people making treatment decisions for millions of people. They are guilty of bias, even though they accuse patients of it themselves.

Comments Off on Dr. Walker at TBDWG Meeting- Sick Patients Who Want to Get Treated Believe in Persistent Lyme ‘like a Religion’

Misdiagnosis of Lyme-Caused Rash Can Have Potentially Fatal Consequences