What is Disulfiram & Why is it Sparking Excitement in the Lyme Community?

What is disulfiram and why is it sparking excitement in Lyme community? 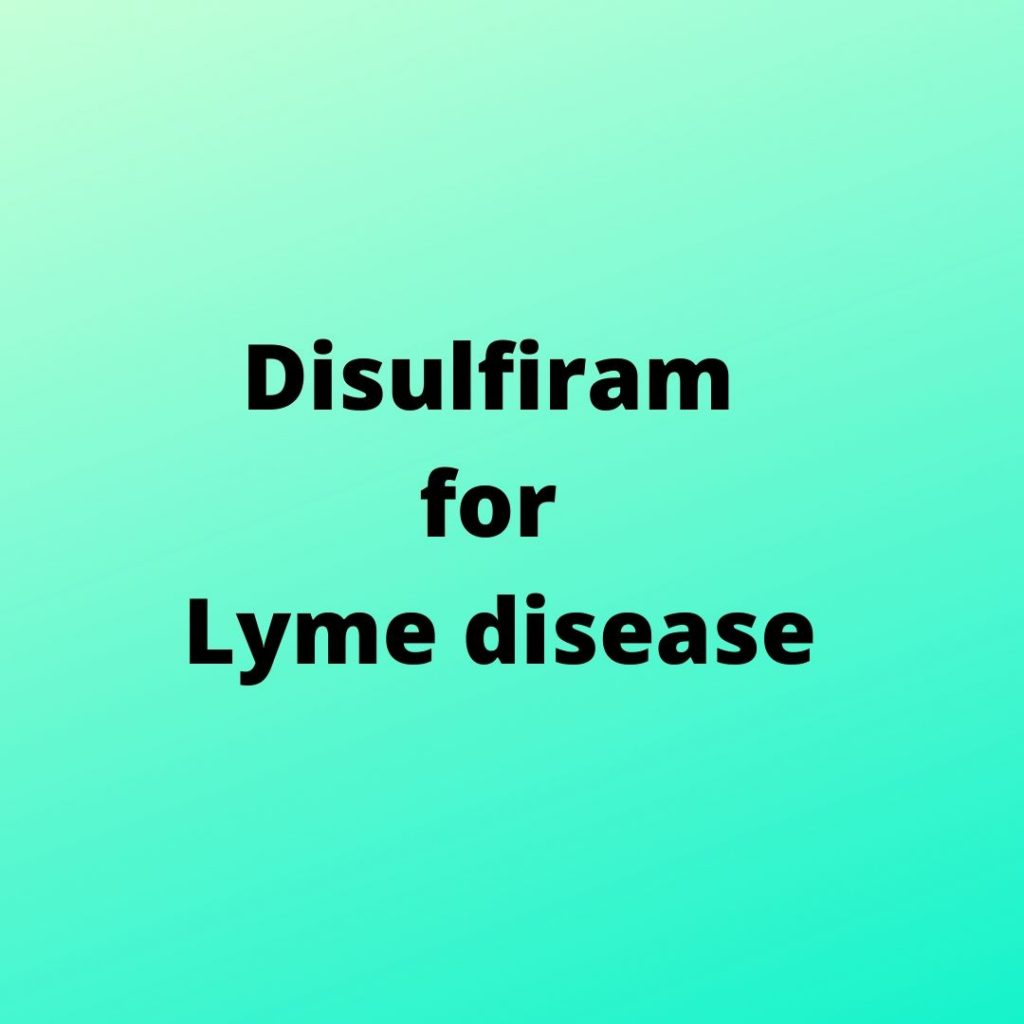 by Kristina Bauer and Cozette Moysa

Disulfiram is a chemical compound first synthesized in the late 1800s. By the early 1900s, it was used as an industrial agent in the manufacture of rubber. The sulfur-containing substance also had some medicinal uses, such as treating parasites.

In 1937, a physician published a paper about disulfiram. He reported that rubber workers experienced violent physical reactions after they drank alcoholic beverages. He suspected this was connected to their exposure to disulfiram.

This led to the discovery of what is commonly called the “disulfiram reaction”—being exposed to disulfiram and consuming alcohol causes an intensely disagreeable physical reaction.

In 1951, the Food and Drug Administration licensed disulfiram under the trade name Antabuse, for the purpose of discouraging alcoholics from drinking. (It is sold under different trade names in other countries.) Antabuse has been on the US prescription drug market ever since and has been recognized as having mild to moderate side effects.

In recent years, a combination of factors has resulted in new attention being focused on disulfiram. In 2015, a research team led by Dr. Kim Lewis of Northeastern University demonstrated that Borrelia burgdorferi (Bb), the causative agent of Lyme disease, forms dormant persister cells. These persisters cannot be eradicated by the standard recommended antibiotics. Dr. Lewis’s findings prompted several drug-screening studies looking for medications to kill off these antibiotic-tolerant persister cells.

In 2016, BioADD lab—located at Stanford University and run by Director Jayakumar Rajadas PhD and lead researcher Raveendra Pothineni PhD—published groundbreaking research. After testing thousands of compounds against cultures containing active and persister Bb cells in the laboratory, they found disulfiram to be the most effective in killing all forms of the bacteria. This was a stunning discovery.

Later that year, Dr. Lewis spoke about his work with persisters and the potential use of disulfiram against Lyme disease at the LymeMIND conference in New York City. A long-term Lyme patient later viewed a video of Dr. Lewis’s presentation on YouTube. The patient brought the information to his treating physician, Dr. Kenneth Liegner, and asked to try the medication.

After Dr. Liegner conducted a search of the medical literature on the drug, he started the patient on disulfiram in March 2017. Later on, Dr. Liegner started two other patients on disulfiram as well. All three had been diagnosed with Lyme disease and babesiosis and had remained ill even after undergoing years of antibiotic treatment. On disulfiram, all three improved substantially. Dr. Liegner published a case study paper on these three patients in May 2019.

During 2018 and 2019, disulfiram success stories began circulating among doctors and patients in the Lyme community, both in the United States and abroad. Soon, an increasing number of physicians and patients undertook disulfiram therapy, with varying results.

Patient feedback about the drug

Several Facebook patient support groups, such as Disulfiram Experience for Lyme, were established in 2019. These social media groups have provided valuable information regarding patient response to the drug. More than 15,000 people from around the world have joined such groups. Meanwhile, the number of Lyme patients conducting their own personal disulfiram trials has increased steadily.

Reports of positive responses to disulfiram have been encouraging, but unanticipated and sometimes severe tolerability issues have emerged. Most notably, a considerable number of patients on disulfiram have reported newly emerging or a worsening of mild-to-severe neuropathy. (Neuropathy is nerve dysfunction that may include numbness, tingling, shooting pains, and/or muscle weakness.) On the other hand, some Lyme patients have said that disulfiram made their pre-existing neuropathy go away.

People taking disulfiram must avoid all forms of alcohol, starting 12 hours prior to the first dose. This must continue throughout therapy and for two weeks after finishing the last dose. The disulfiram reaction can start suddenly, last for several hours and be extremely uncomfortable. Initial symptoms may include severe flushing of the skin, nausea, vomiting and headache. In rare cases, the reaction has been fatal. Alcohol is contained in many products, and patients must learn to avoid being exposed to its many hidden forms. (See chart at end of this article.)

There are clearly big differences in side effects between people who take Antabuse to combat alcoholism and chronically ill patients who use it to treat Lyme disease. The starting dose suggested for alcoholism (250-500 mg/day) is much higher than the dose suggested for treating Lyme disease. Lyme doctors and their patients who have experience with the drug strongly advise to “start low and go slow.”

Some people begin with a fraction of a tablet (or a compounded low dose), which is administered daily, or even once or twice a week. The dosage is raised in tiny increments, perhaps no more frequently than every two weeks, depending on evaluation, history and patient response. The recommended blood work must be conducted on a regular basis, especially within the first two months.

Disulfiram is a deceptively small molecule that undergoes extensive and complex metabolism. It requires a full two weeks for disulfiram’s metabolites to exit the body.

Severe neuropathy has most often been associated with the higher doses recommended for alcoholism. The development of neuropathy, however, has been reported even at low doses. A few alcoholic and Lyme disease patients taking disulfiram have been reported to develop a temporary psychosis. This is thought to be dose-dependent and reportedly resolves within 4-5 days after stopping the drug.

The discovery of disulfiram’s ability to eradicate Bb in the lab and reports of positive results for many patients has rocked the Lyme community. The novel use of this old drug provides new hope for Lyme patients and underscores the need for further research. It is essential for patients to recognize that any and all prescription medications can potentially cause adverse effects. The decision to take any prescription medication, including disulfiram, requires serious consideration and must be discussed with the treating physician.

Kristina Bauer is a Lyme advocate, patient and mother of four children with congenital Lyme disease. Cozette Moysa is a retired pharmacist with over 30 years of experience with the California Department of Mental Health. She also has a child with Lyme and is very involved with Lyme advocacy. They can be contacted via the Disulfiram for Lyme website. 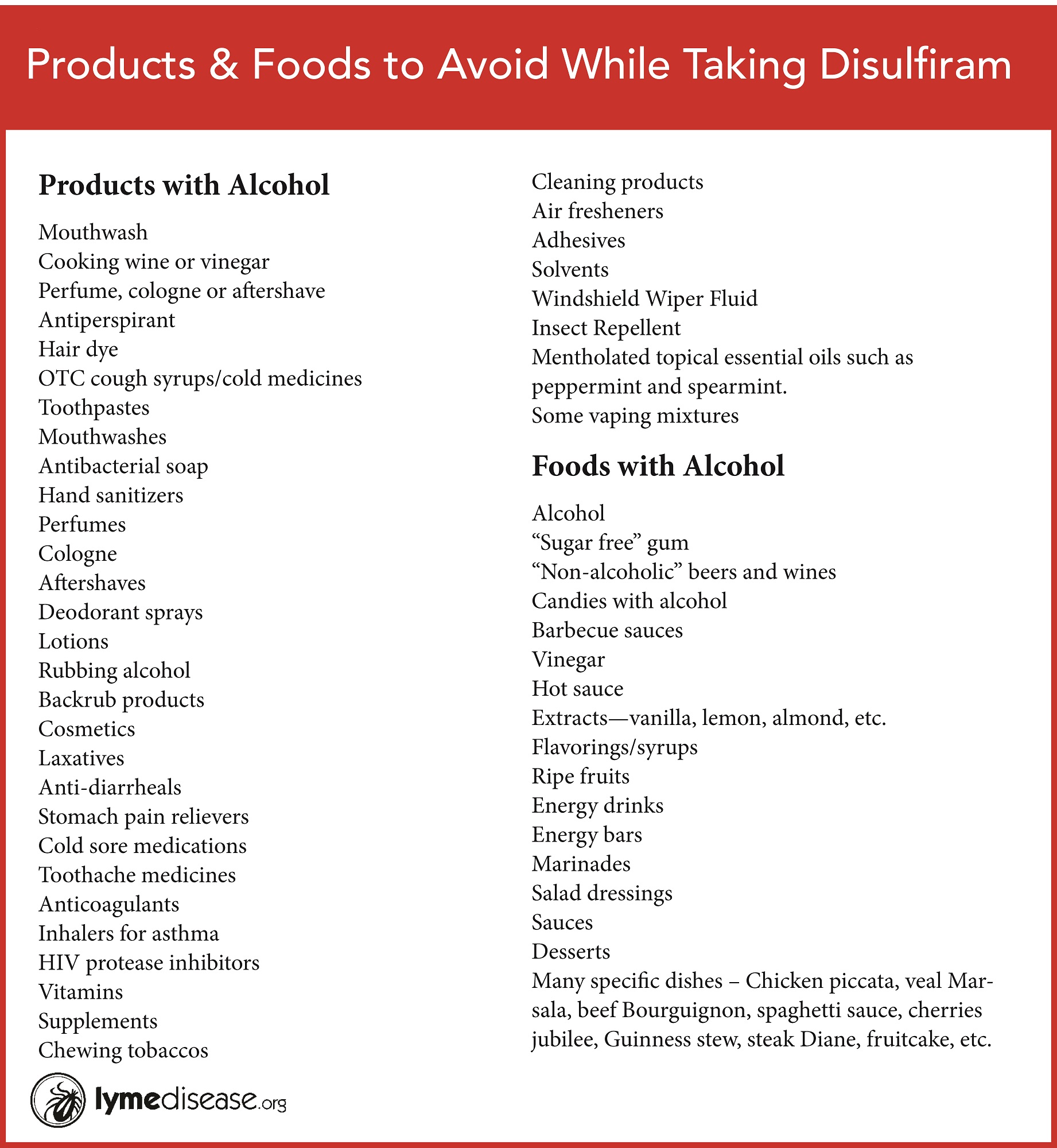 Comments Off on What is Disulfiram & Why is it Sparking Excitement in the Lyme Community?