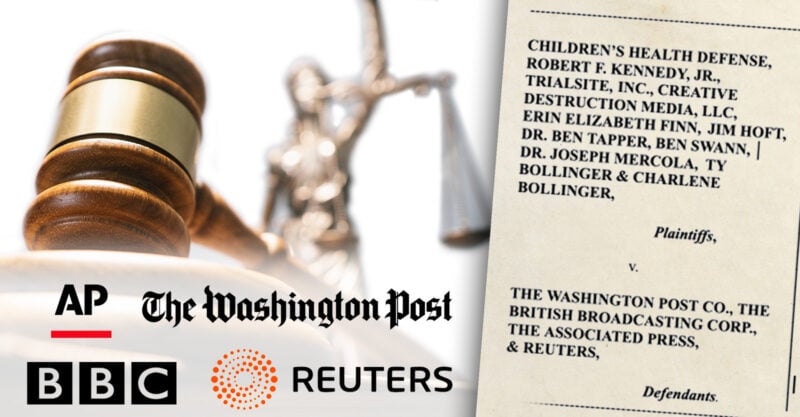 CHD has filed a first-in-the-country antitrust lawsuit against members of the “Trusted News Initiative” (“TNI”) for collusively censoring online news.

The TNI is a self-proclaimed “industry partnership” formed around 2020, joining together some of the world’s largest legacy news organizations, such as The Washington Post, the Associated Press, Reuters, and its founder, the British Broadcasting Corporation (BBC) with all the biggest Big Tech platforms including  Facebook, Google, Twitter, Microsoft. The TNI exists to, in its own words, “choke off” and “stamp out” online news reporting that the TNI or any of its members peremptorily deems “misinformation.” TNI members have targeted and suppressed completely accurate online reporting by non-mainstream news publishers concerning both COVID-19 (on matters including treatments, immunity, lab leak, vax injury, and lockdowns/mandates) and U.S. elections (such as the Hunter Biden laptop story).

Federal antitrust law prohibits firms from colluding to deny critical facilities or market access to rivals. Such agreements are called “group boycotts,” and they are per se illegal. The TNI is a massive group boycott. Since 2020, it has successfully denied critical market facilities—i.e., the world’s dominant social media platforms—to rival news publishers whose reporting competes with and challenges TNI orthodoxy. Under antitrust law, the victims of a group boycott—like the Plaintiffs in our case—are entitled to treble damages.

Moreover, CHD with this lawsuit aims to vindicate the freedom of speech and of the press. The Defendants are the BBC, The Washington Post, the Associated Press, and Reuters.

I highly recommend this article, “Censorship and the Legacy Media’s Misinformation Monopoly.”

I can attest to how Linkedin blocks journalists from exposing government disinformation.  It happened to a majority of my contacts and then it happened to me.  I want nothing to do with Linkedin.

Brought to You By Pfizer

If you feel like everywhere you turn you are being told to take the jab, now you know.  The messaging has been carefully manipulated, crafted, and thrust upon an unsuspecting public by those that should no longer be trusted for anything, ever again.

Perfect Timing! mRNA Treatment in Pipeline to Inject Straight Into Hearts of Those Suffering Heart Issues After COVID Shots