For a refresher on the mounting list of adverse reactions and deaths reported after COVID shots see:  https://madisonarealymesupportgroup.com/2020/12/21/warning-3150-injuries-in-1st-week-of-covid-vaccines-among-american-healthcare-workers-pregnant-women-included/

In response to a Freedom of Information Request submitted by Children’s Health Defense, the Centers for Disease Control and Prevention last week admitted it never analyzed the Vaccine Adverse Event Reporting System for safety signals for COVID-19 vaccines. 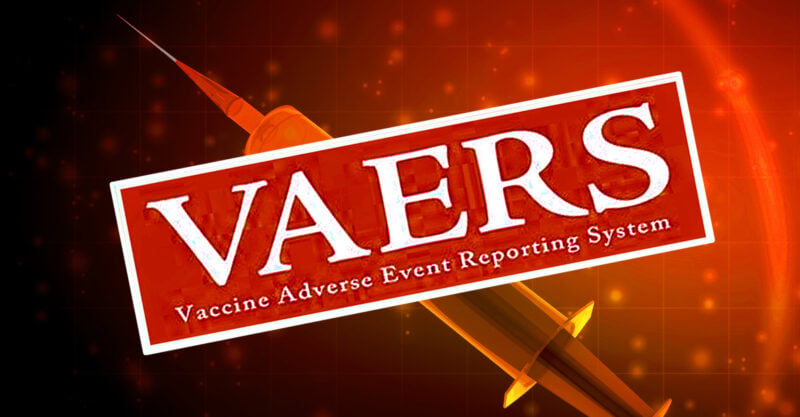 In a stunning development, the Centers for Disease Control and Prevention (CDC) last week admitted — despite assurances to the contrary — the agency never analyzed the Vaccine Adverse Event Reporting System (VAERS) for safety signals for COVID-19 vaccines.

The admission was revealed in response to a Freedom of Information Act (FOIA) request submitted by Children’s Health Defense (CHD).

In September 2021, I published an article in The Defender in which I used the CDC’s published methodology to analyze VAERS for safety signals from COVID-19 vaccines.

The signals were loud and clear, leading me to wonder “why is nobody listening?”

Instead, I should have asked, “Is anybody even looking for them?”

After that article was published, I urged CHD’s legal team to submit a FOIA request to the CDC about its VAERS monitoring activities.

Since CDC officials stated publicly that “COVID-19 vaccine safety monitoring is the most robust in U.S. history,” I had assumed that at the very least, CDC officials were monitoring VAERS using the methods they described in a briefing document posted on the CDC website in January 2021 (and updated in February 2022, with minor changes).

The lynchpin of their safety monitoring was to mine VAERS data for safety signals by calculating what are known as proportional reporting ratios (PRR’s).

If the new vaccine shows a significantly higher reporting rate of a particular adverse event relative to the old one, it counts as a safety signal that should then trigger a more thorough investigation.

The briefing document states, “CDC will perform PRR data mining on a weekly basis or as needed.”

And yet, in the agency’s response to the FOIA request, it wrote that “no PRRs were conducted by CDC. Furthermore, data mining is outside of the agency’s purview.”

The agency suggested contacting the U.S. Food and Drug Administration (FDA), which was supposed to perform a different type of data mining, according to the briefing document. 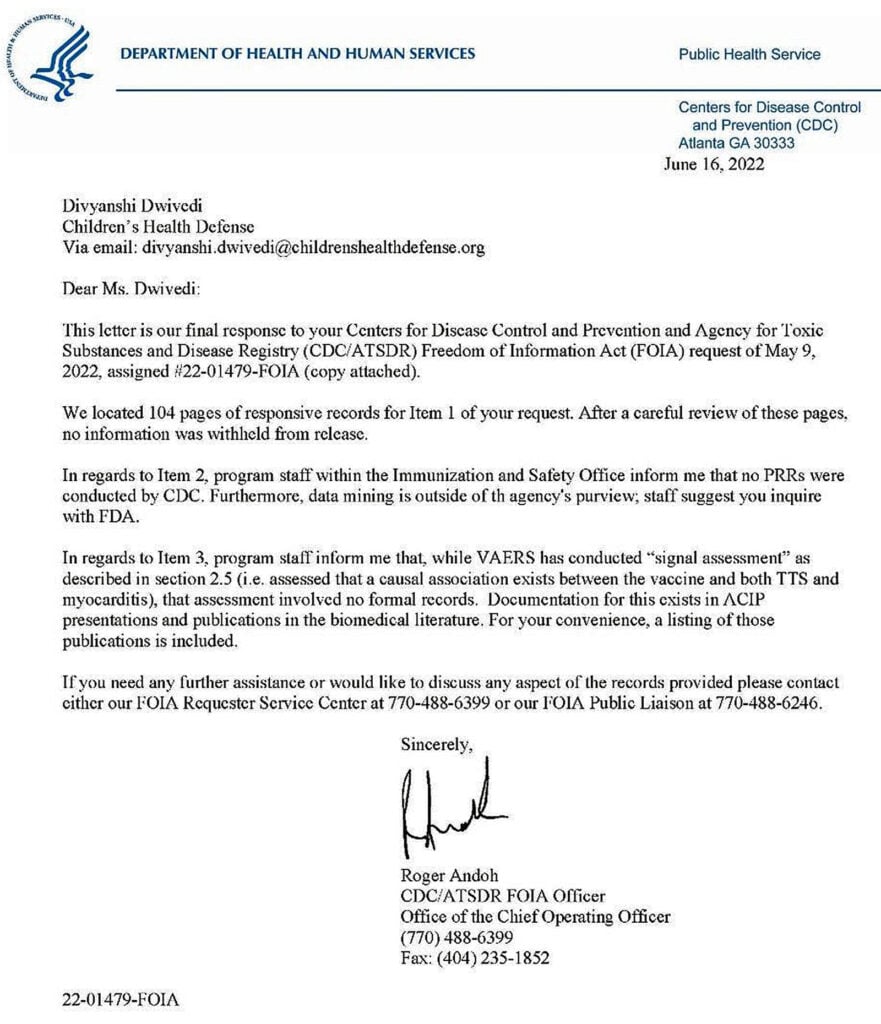 CDC officials repeatedly claimed they have not seen safety signals in VAERS. 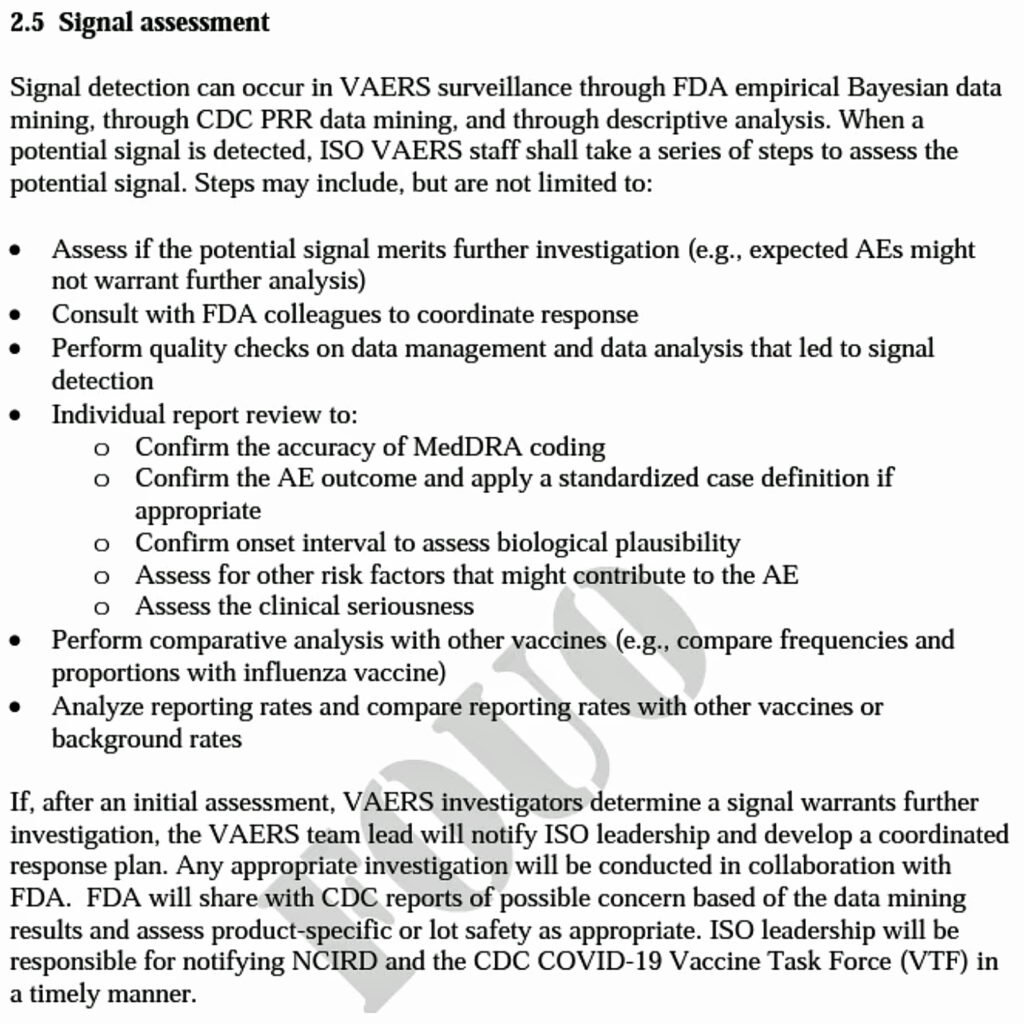 For example, on April 27, 2021, CDC Director Dr. Rochelle Walensky stated the CDC did not see any signals related to heart inflammation.

But a PRR calculation I did using the number of myo/pericarditis reports listed in the first table produced by the CDC obtained via the FOIA request reveals clear and unambiguous safety signals relative to the comparator vaccines mentioned in the briefing document (i.e., flu vaccines, FLUAD and Shingrix).

The table is dated April 2, 2021, almost four weeks before she made those remarks.

The actual monitoring the CDC did diverges from the one promised in the briefing document in other ways.

And it only began monitoring in early April 2021, even though reports from COVID-19 vaccines had been flooding VAERS since mid-December of the previous year.

To be clear, VAERS is not the only database the CDC uses to monitor COVID-19 vaccine safety.

For example, the CDC sponsored several studies of COVID-19 safety using the Vaccine Safety Datalink (VSD), which is comprised of millions of medical records from HMO’s across several states.

Those studies do not raise many safety concerns. However, they make many questionable methodological choices.

To give one example, a major safety study based on VSD data published in September 2021, in “JAMA,” compares adverse event rates that occur within 1-21 days of vaccination to the rate of occurrence from 22 to 42 days after vaccination.

It makes no comparison between vaccinated and unvaccinated individuals, or before vaccination versus after in the same individuals.

Moreover, the VSD is far from infallible, having failed initially to detect the increase in myocarditis rates.

In contrast, although calculating PRR’s is a blunt pharmacovigilance tool and far from perfect, it nevertheless has the advantage of being straightforward and difficult to manipulate with statistical sleight of hand.

PRRs are one of the oldest, most basic and most well-established tools of pharmacovigilance. The calculations are so straightforward that the CDC automated it several years ago, so it could have been done at the press of a button.

It simply beggars belief that the CDC failed to do this simple calculation. Even now, a paper published by CDC staff in March on the safety of the mRNA COVID-19 vaccines remains purely descriptive with no PRR calculation.

Meanwhile, a study published by a researcher not affiliated with the CDC in February in “Frontiers in Public Health” analyzes VAERS and EudraVigilance data using a method similar to PRRs, revealing clear and concerning safety signals.

And while it is true that VAERS is not the only database the CDC can use to monitor COVID-19 vaccine safety, it is of critical importance because it can reveal signals much faster than any other method — if anybody cares to look for them.

It remains to be seen if the FDA was properly monitoring VAERS. That will be the subject of a future FOIA request.

But even if it was, it doesn’t change the fact that the CDC completely failed in its promise to monitor VAERS for safety signals.

Yet another reason not to trust the CDC, besides the fact it’s deleting VAERS reports.

The case reports included in Pfizer clinical trial documents, released June 1 by the U.S. Food and Drug Administration, reveal a trend of classifying almost all adverse events — and in particular severe adverse events — as being “not related” to the vaccine.

The latest release by the U.S. Food and Drug Administration (FDA) of Pfizer-BioNTech COVID-19 vaccine documents reveals numerous instances of participants who sustained severe adverse events during Phase 3 trials. Some of these participants withdrew from the trials, some were dropped and some died.  (See link for article)

A few examples of deaths & severe reactions in the Pfizer trials that were classified as “not related” to the ‘vaccine’:

Many serious adverse events and deaths were listed in a separate, massive document, exceeding 2,500 pages.

Not ONE of the events, classified as toxicity level 4 – the highest and most serious level, were classified as being related to “vaccination.”

Level 4 events listed in the document include but are not limited to the following, many of which occurred in multiple patients:

Only a small number of toxicity level 3 adverse events were indicated as having been “related” to vaccination. Such adverse events included but are not limited to the following, some of which occurred in multiple trial participants:

The other little dirty secret are the patients who discontinued the trial due to the following adverse events which was released in an additional document.

This document states that trial participants were administered one of two candidate vaccines, labeled BNT162b1 and BNT162b2 (the latter of which ultimately received an EUA from the FDA), or a placebo. A variety of dosage levels were also tested, ranging from 10 μg to 100 μg for BNT162b1, and 10 μg to 30 μg for BNT162b2.

In what will turn out to be a general pattern throughout the clinical review, we are told that “most AEs were considered by the investigator as not related to study intervention and mild to moderate in severity, and all AEs were reported as resolved.”

Please read the entire article for yourself to discover the unethical and fraudulent way these trials are run, and that despite the incidence of severe adverse events including death, Pfizer concluded the shots were ‘safe and well-tolerated.’

Unilateral Knee Swelling in a Child Due to Lyme Disease