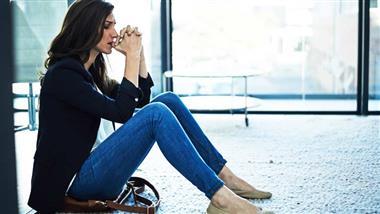 Social anxiety disorder, formerly known as social phobia, affects 7.1% of U.S. adults in any given year, while an estimated 12.1% of U.S. adults will experience the disorder at some point during their lives.1 People with social anxiety disorder feel intense fear and anxiety in social situations, such that they may try to avoid such situations altogether.

With social anxiety disorder, there is an overriding fear of being negatively judged or rejected by others when in public. People with the condition may worry that others will notice their anxiety, leading to embarrassment and sometimes debilitating panic attacks.

In addition to blushing, shaking hands or stumbling over words, people with social anxiety disorder may experience rapid heart rate, nausea and sweating when in social or performance situations.2

The fear of being judged by others can be so powerful that it can cost those affected job opportunities, friendships and romantic relationships. The condition can range from mild to severe, with an estimated 29.9% of adults with social anxiety disorder having serious impairment while 38.8% have moderate impairment and 31.3% mild impairment.3

There are, however, strategies that can help people with social anxiety to cope and regain control of their lives without having to struggle through debilitating fear.

It’s commonly assumed that social anxiety is a form of extreme shyness, but there are distinct differences. While people who are shy may be more likely to suffer from social anxiety,4 shyness is considered to be a “normal” personality trait, which isn’t associated with the significant fear felt by those with social anxiety.

Those with social anxiety experience more distress and disruptions to their daily life than people who are simply shy.5 While those with the disorder typically know their fears are irrational, they may feel powerless against the anxiety. The Social Anxiety Association explained:6

But having social anxiety prevents people from being able to do the things they want to do. Although people with social anxiety want to be friendly, open, and sociable, it is fear (anxiety) that holds them back.“

Different triggers may cause symptoms of social anxiety to flare up in different people. The most common symptom is a feeling of intense anxiety or fear, which may be accompanied by trembling, dry mouth, racing heart, muscle twitches and nervousness. Triggering symptoms may include:7

If you’re struggling with social anxiety, taking steps to cope can be life-changing, but many people avoid seeking help. According to the Anxiety and Depression Association of America, “Despite the availability of effective treatments, fewer than 5% of people with social anxiety disorder seek treatment in the year following initial onset and more than a third of people report symptoms for 10 or more years before seeking help.”8

If your symptoms are debilitating, professional help is recommended. For mild or moderate cases, however, as well as to support treatment in severe cases, the following strategies can help.

1. Take Opportunities for Social Mishaps — Social mishap exposure practice is a technique that puts you in the very situations you fear most — such as singing in a public place — in order to help reinforce the notion that nothing catastrophic will happen as a result.

You may need to seek the support of a professional to work through this, but the idea is that “patients are forced to re-evaluate the perceived threat of a social situation after experiencing that social mishaps do not lead to the feared long-lasting, irreversible and negative consequences.”9

There is evidence that avoiding social interactions may make social anxiety worse. Similarly, this can lead to other problems, like smartphone addiction, which is associated with social anxiety.10 “Hiding” behind a cellphone is likely to make mental health worse, whereas social mishap exposure is intended to help desensitize those affected, making social experiences easier to handle. As explained in Cognitive and Behavioral Practice:11

“An important reason why SAD [social anxiety disorder] is maintained in the presence of repeated exposure to social cues is because individuals with SAD engage in a variety of avoidance and safety behaviors to reduce the risk of rejection.

These avoidance tendencies, in turn, prevent patients from critically evaluating their feared outcomes and other catastrophic beliefs, leading to the maintenance and further exacerbation of the problem.

2. Turn Negative Thoughts Into Positive Ones

A simple example of a positive coping strategy is the “yes, but” technique. You may think, “Yes, I’m going to be speaking at a meeting tomorrow, but I am well prepared and will be successful.”12 The positive affirmation helps to balance the negative thoughts and may help calm your mind.

Energy psychology tools such as the Emotional Freedom Techniques (EFT), demonstrated in the video above, can help you reduce your stress by correcting the bioelectrical short-circuiting that can happen when anxiety becomes chronic.

Research confirms EFT can be a powerful intervention for stress and anxiety,13 in part because it specifically targets your amygdala and hippocampus, which are the parts of your brain that help you decide whether or not something is a threat.14

EFT has also been shown to lower cortisol levels, which are elevated when you’re stressed or anxious, while improving symptoms of psychological distress, including anxiety and depression.15

3. Avoid Alcohol — It may be tempting to ease anxiousness with alcohol, but drinking heavily will have the opposite effect, lowering mood and increasing anxiety throughout the next morning.16Further, excessive alcohol use is common among people with social anxiety,17 so it’s best to avoid this negative coping strategy in favor of the other positive options listed here.

4. Engage in Acts of Kindness — Engaging in acts of kindness, such as doing a roommate’s dishes, was found to reduce the desire to avoid social situations in students with high levels of social anxiety.18,19

In a news release, study author Jennifer Trew explained, “Acts of kindness may help to counter negative social expectations by promoting more positive perceptions and expectations of a person’s social environment. It helps to reduce their levels of social anxiety and, in turn, makes them less likely to want to avoid social situations.”20

5. Protect Yourself From EMFs — Due to the pioneering work of Martin Pall, Professor Emeritus of biochemistry and basic medical sciences at Washington State University,21 we know that voltage gated calcium channels are over 7 million times more sensitive to microwave radiation than the charged particles inside and outside our cells. This means that the safety standards for this exposure are off by a factor of 7 million.

When EMFs hit your voltage gated calcium channels, nearly 1 million calcium ions per second are released into the cell, which then causes the cell to release excessive nitric oxide that then combines with superoxide to form peroxynitrate, which then forms the dangerous hydroxyl free radical that causes massive mitochondrial dysfunction.

The tissues that have the greatest density of voltage gated calcium channels are your nerves and tissues, like the pacemaker in your heart and your brain. When the channels in the brain are activated, it causes a major disruption in neurotransmitter and hormonal balance that can increase the risk for anxiety. You can learn how to reduce your EMF exposure here.

According to Konstantin Buteyko, founder of the Buteyko Breathing Method, anxiety is triggered by an imbalance between gases in your body, specifically the ratio between carbon dioxide and oxygen. In the video above, Buteyko breathing coach Robert Litman explains how your breathing affects the ratio of these gases and demonstrates how you can literally breathe your way into a calmer state of mind.

A Buteyko breathing exercise that can help quell anxiety is also summarized below. This sequence helps retain and gently accumulate CO2, leading to calmer breathing and reduced anxiety. In other words, the urge to breathe will decline as you go into a more relaxed state.

7. Eat Fermented Foods — Fermented foods have been shown to curb social anxiety disorder in young adults, likely by helping to optimize the gut microbiome.22 Good bacteria, or probiotics, have also been shown to help normalize anxiety-like behavior in mice with infectious colitis.23Along these lines, clean up your diet to help stabilize your mood by eating more of these anxiety-busting foods.

8. Try Lavender Aromatherapy — Aromatherapy is a simple, DIY tool you can use to help calm your nerves. In one study, 100 patients admitted to a medical center for ambulatory surgery were given either lavender aromatherapy (inhaled) or standard nursing care (the control group) while in the preoperative waiting room.

Their levels of anxiety were recorded upon arrival to the waiting area and again upon departure. Those who received the aromatherapy had a greater reduction in anxiety compared to the control group.24

Research published in Phytomedicine also found that an orally administered lavender oil preparation was as effective as the drug Lorazepam for the treatment of generalized anxiety disorder.25

9. Consider Ashwagandha — Ashwagandha is a powerful adaptogenic herb that helps your body manage and adapt to stress. In a 2009 study, patients diagnosed with moderate to severe anxiety lasting longer than six weeks who were treated with 300 milligrams of ashwagandha root for three months reported “significantly decreased” symptoms compared to those undergoing standard psychotherapy.26

Be Wary of Drugs for Treating Anxiety

Antidepressant therapy with selective serotonin reuptake inhibitors (SSRIs) is sometimes recommended for anxiety disorders based on the “chemical imbalance” theory that anxiety disorders (and depression) may be due to low serotonin levels. Yet, research suggests people with social anxiety disorder may actually have increased serotonin synthesis,27 making treatment with SSRIs highly questionable.

Other commonly prescribed drugs for anxiety include benzodiazepine drugs like Ativan, Xanax and Valium. They exert a calming effect by boosting the action of a neurotransmitter called gamma-aminobutyric acid (GABA) in the same way as opioids (heroin) and cannabinoids (cannabis) do.

This in turn activates the gratification hormone, dopamine, in your brain. Since the identical brain “reward pathways” are used by both types of drugs, they can be addictive.

If you’re struggling with social anxiety, you have nothing to lose, and everything to gain, by applying lifestyle modifications before trying medication, and you may find that these strategies help lessen your anxiety naturally, helping you to embrace life once again.

As mentioned, if your anxiety is so severe that it’s interfering with your daily life, speak with a holistic health care provider who can help you develop a comprehensive treatment plan.

I think there is much to be discovered and utilized in helping Lyme/MSIDS patients with the psychological aspects of this complex and debilitating illness. Anxiety is common. While Mercola’s article deals specifically with “social anxiety,” many Lyme/MSIDS patients suffer with anxiety due to having an infection(s) in their brains. My husband and I both had serious symptoms that were frankly, unbelievable, had we not lived to tell about them! (hearing voices, hallucinations, anxiety, depression, OCD-like behavior, inability to handle any amount of stress, irritability and rage, and a veritable laundry-list from hell.  For more on psychological Lyme:  https://madisonarealymesupportgroup.com/2015/10/18/psychiatric-lymemsids/

While space constraints prohibit me from going into detail, I am going to mention a few things we tried with success in our journey with the supervision of experienced health professionals. This is solely for your education and enjoyment.

Comments Off on Top Nine Tips For Coping With Social Anxiety