Are Parasites Making You Sick? Here’s Everything You Need to Know If You Have Lyme/MSIDS

Are Parasites Making You Sick? Here’s Everything You Need to Know If You Have Lyme

Chances are you’ve heard someone boast the benefits — or even the necessity — of doing a parasite cleanse. They’ve probably listed some talking points about how parasites are more common than you think, that they’re driving your mystery symptoms, or that they tend to crop up in people with chronic ailments like Lyme disease. It’s enough to make anyone feel a little, well, squirmy. But how realistic is it that you’re truly playing unintentional host or that getting rid of these invaders is your secret to wellness?

According to Dr. Bill Rawls, MD, medical director of RawlsMD and Vital Plan, the logic doesn’t totally stack up. While it’s always possible you could have a parasite — depending on your living conditions, travel history, and eating and cooking habits — he is doubtful that they’re wreaking too much havoc on your health if you live in the United States or another high-income country.

Below, we cover the basics of parasites, who could be at greater risk for complications, and some basic preventative measures.

What are Parasites, Anyway?

“All living organisms that depend on a host are parasites. So technically all the microbes (bacteria, viruses, protozoa) in our bodies are parasites — but generally, what people refer to when they say parasites are worms,” says Dr. Rawls. (Think: roundworm, hookworm, flatworm.)

While microbes can replicate by cell division (or, in the case of viruses, by commandeering your own body’s cells), parasitic worms (or “helminths”) are multicellular organisms that reproduce a bit differently. They typically enter the body as eggs or larvae via contaminated water, soil, or food. Then, they make their way to your intestines, where they attach and suck blood and nutrients from your body — which could contribute to issues like anemia, nutrient deficiencies, gastrointestinal distress, fatigue, and weight loss.

Eventually, these parasitic worms reproduce sexually or asexually and shed eggs. Thankfully, the eggs pass through your stool and hatch outside the body — so you won’t continue accumulating more worms in your system.

Even though worms won’t multiply inside of you, some species can survive in the body for a couple of years, so it’s important to get treated if you suspect something is amiss. Still, having worms doesn’t always mean you’ll have negative health consequences: “Unless you’ve got a significant load of parasites, you may not have much in the way of symptoms at all,” says Dr. Rawls. “And the only way you’ll have a high parasitic load is if you continue ingesting new eggs or larvae from a contaminated source, which is unlikely in the U.S. and other developed countries.”

Beyond worms, three notable intestinal parasites in the protozoa category are giardia, cryptosporidium (or “crypto”), and toxoplasmosis. Giardia and crypto are more common in the U.S. and are typically contracted from fecal-contaminated lakes or streams. Unlike worms, these do have the ability to multiply in the body. Some individuals may experience no symptoms at all, but for others, the main symptoms include diarrhea, stomach cramps, vomiting, and dehydration. Often, symptoms clear up on their own in a few weeks, but if not, medications are available. 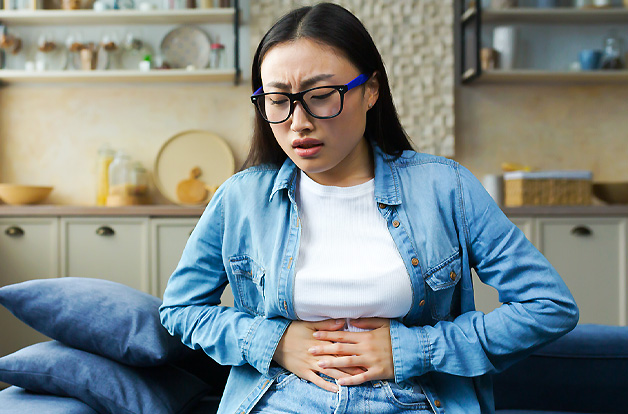 Toxoplasmosis affects various bodily tissues. It’s estimated to infect 11% of the population over age six, and it’s often contracted by eating undercooked, contaminated meat or shellfish. Toxoplasmosis may cause flu-like symptoms that resolve in weeks to months, or you might have no symptoms. Either way, it remains in the body inactive and could be reactivated (potentially becoming problematic) if a person becomes immunosuppressed.

Who’s Most Likely to Contract Parasites?

You’re far more likely to get parasitic worms if you live in or visit an economically-developing country. Helminths are typically transmitted via fecal contamination of food and drinking water or from walking barefoot on fecal-contaminated soil. This is more common in places without modern toilets or sewage systems.

For example: “If you live in a country where your outhouse is near your drinking supply or where you grow your food, there’s a good chance that some of those eggs or larvae will get into things you’re ingesting,” says Dr. Rawls. “You could also be at risk of reinfecting yourself.”

Pets could be a sneaky source of parasites, too. Puppies and kittens are more likely to be infected with roundworms, hookworms, or giardia. Cats who spend time outdoors and consume infected rodents or birds can contract toxoplasmosis and pass it in their feces, so changing litter boxes poses a potential risk for exposure. Pregnant individuals need to be particularly cautious about avoiding toxoplasmosis exposure early in pregnancy because it has been linked to miscarriages, stillbirths, and health problems for the baby.

That said, “the research does not show that people in the U.S. have heavy parasite loads,” says Dr. Rawls. “Everyone’s situation is different, and maybe people are picking stuff up here and there, but that’s not average.” Given our good sanitation practices, treated water supplies, and monitoring of food products by governmental agencies, serious parasitic infections are rare.

Are You More Likely to Get a Parasite if You Have Lyme?

The state of your immune health does have an impact on your ability to clear parasites and keep symptoms at bay. “The research in developing countries shows that the biggest parasite loads are found in people with compromised immune health,” says Dr. Rawls.

Additionally, if you have a condition like HIV/AIDS or cancer, or you’re taking certain immunosuppressive drugs, you may be at a greater risk for more severe complications from a parasitic infection, warns the Centers for Disease Control and Prevention (CDC). Pregnancy or those young or old in age can also be states where the body is considered immunosuppressed, and treating parasitic infections with medications is much more likely to be necessary.

What does this mean for people with chronic Lyme disease? It’s unclear. Lyme patients may be less able to tolerate and neutralize parasites than their Lyme-free counterparts, says Dr. Rawls. But the research just isn’t there to show that people with Lyme end up with heavy parasite loads. So it’s difficult to say with certainty if Lyme poses an increased risk of parasites or if parasites are actively inhibiting your ability to heal from Lyme.

What Steps Can You Take to Protect Yourself from Parasites?

If you have a strong immune system, eat clean food, and filter your water, the chances that you’re being exposed to big parasite loads are pretty slim, says Dr. Rawls. Here are some basic practices to keep yourself safe (spoiler: you may not want to jump right to an intense parasite cleanse you find on the internet):

1. Practice Good Hygiene for You and Your Pet.

Wash your hands regularly, especially after touching soil, using the bathroom, touching animals, or disposing of animal feces. Keep your pets current on dewormer treatments, too. They should ideally be on a monthly, year-round preventative product for intestinal parasites and heartworm.

This is a must for curbing your risk of giardia and cryptosporidium. Always bring your own filtered water and be careful not to ingest water while swimming.

4. Protect Yourself in High-Risk Areas.

Contact your local health department before traveling to another country for information on the parasites and diseases you may encounter, and see if prophylactic medication is recommended. If you’re going somewhere without modern sewage systems, only drink bottled water.

Any steps you can take to support overall health — getting enough sleep, moving your body regularly, eating a nutrient-dense diet loaded with colorful veggies, minimizing stress — will support your body’s immune system in neutralizing foreign invaders, parasites or otherwise.

Several herbs with gentle, antiparasitic properties are safe to take on a regular basis, says Dr. Rawls. “Garlic, andrographis, Japanese knotweed, cat’s claw — all of these have been traditionally used for their anti-helminth properties,” he says. “They help create an environment that makes it more difficult for parasites to exist or reproduce.” The good news: These are all beneficial herbs for suppressing Lyme-related microbes, too, and they’re commonly found in herbal therapy protocols.

7. Be Cautious with Herbal Parasite Protocols.

Often, the parasite cleanses you read about online involve the classic combo of clove, wormwood, and black walnut, but using these without medical supervision is not advised. “These are strong enough that I don’t use them routinely,” says Dr. Rawls. “Clove can be irritating to the gut, long-term use of wormwood can cause neurological issues, and black walnut can make you feel terrible.”

Other herbal products that have gained popularity for their potential antiparasitic properties include papaya seeds and Mimosa pudica — but their safety and optimal dose is still unclear. Papaya seeds were shown in a small 2007 study to effectively clear intestinal parasites from a group of Nigerian children, but the research pretty much stops there. Studies are also scant on Mimosa pudica. While it’s been traditionally used in Ayurvedic medicine to manage diarrhea and infections, it contains “anti-fertility” properties, so it should be avoided if you’re pregnant or trying to become pregnant.

What Should You Do If You Suspect a Parasite?

Symptoms will vary depending on the parasite and your baseline level of health, but contact your doctor if you experience diarrhea, abdominal pain, bloating, rashes, itching around the rectum, fatigue, weight loss, or if you notice a worm in your stool. Tell them if you’ve consumed undercooked meat or fish, been in contact with potentially contaminated water, or if you’ve taken a trip abroad within the past two years (since parasites may take time to trigger symptoms).

Your doctor will likely order an ova and parasite test (O&P), which looks for parasitic worms and protozoa. For this test, the CDC recommends at least three stool samples, collected on separate days, be examined. Testing for toxoplasmosis, on the other hand, can be a bit trickier and may involve testing blood or cerebrospinal fluid for antibodies or the presence of parasites. If you do have a parasite, there are a variety of medications that should alleviate your infection.

If you’re tempted to try a natural approach with herbs such as clove, wormwood, black walnut, papaya seeds, or Mimosa pudica, be sure to do so in conjunction with a doctor familiar with natural remedies for parasites.

Parasitic infections are rare in high-income countries like the U.S. If you do contract something, there’s a good chance your body might clear it on its own; but if you have troubling symptoms, contact your doctor.

While there’s no clear connection between Lyme disease and an increased risk or severity of parasitic infections, there are ways to protect yourself if you’re worried — from healthy food prep to immune-supporting lifestyle habits to gentle, antiparasitic herbs. Just avoid trying popular “quick fixes” on your own, which could wind up doing more harm than good.

Dr. Rawls is a physician who overcame Lyme disease through natural herbal therapy. You can learn more about Lyme disease in Dr. Rawls’ new best selling book, Unlocking Lyme. You can also learn about Dr. Rawls’ personal journey in overcoming Lyme disease and fibromyalgia in his popular blog post, My Chronic Lyme Journey.

He found three strains of borrelia living in parasitic nematode worms, worm eggs, or larvae in the brain tissue of 19 autopsies.

“while patients are wrongly declared free of Lyme and other tick-borne infections, in reality, too often they contract serious neurodegenerative diseases which can kill them.”

Comments Off on Are Parasites Making You Sick? Here’s Everything You Need to Know If You Have Lyme/MSIDS

STEP RIGHT UP: Get Your Lyme Vaccine Here! (And Booster After Booster)

What is Causing Young Athletes to Collapse? Damar Hamlin #ABV