Asian Longhorned Ticks: Where They Came From + How To Spot Them

Asian Longhorned Ticks: Where They Came From + How to Spot Them

Every spring heralds a new tick season here in the US, along with the need to prevent these pests from wreaking havoc on our health and the health of our pets, livestock, and wildlife. But with at least 80 different tick species in the country, knowing exactly which ones are dangerous and what to look out for can be daunting.

Added to the US tick species list in 2017 was the Asian longhorned tick, which was first discovered stateside on a New Jersey sheep farm after making its way to America. Exploding in numbers due to its unique procreation abilities, a vital need for awareness was born, with its population swiftly expanding inland from the Eastern Seaboard.

So what do we know about these ticks? Can they contract and carry tick-borne infections like Lyme disease, babesia, or other coinfections? Or, do Asian longhorn ticks transmit diseases we’ve never been exposed to?

Research is ongoing, and experts don’t have all the answers yet, but here is what we know so far about the new tick on the block — and what you need to know if you encounter them.

What are Asian Longhorned Ticks?

As you may have guessed by its name, the Asian longhorned tick (ALT), Haemaphysalis longicornis, comes from Asia — eastern nations, including China, Japan, Korean, and parts of Russia — eventually spreading to New Zealand, Australia, and the Pacific Islands around the early 1900s.

While experts can’t say exactly how they got to New Jersey, these tiny ticks likely hitched a ride on livestock shipped from overseas. ALT have reportedly been intercepted on imported animals at several East Coast ports.

Where Have ALT Been Found?

As of September 2021, the Centers for Disease Control and Prevention (CDC) has reported ALT in 17 states: 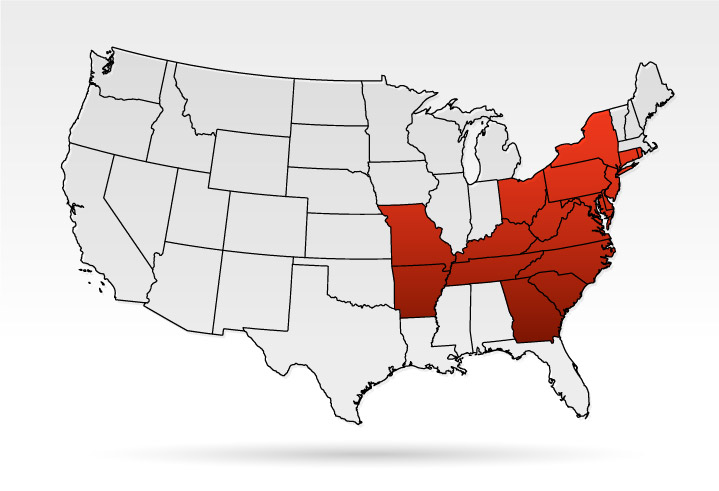 Virginia and West Virginia lead the way for the highest number of affected counties. ALT have mostly been found while feeding on livestock and in surrounding pastures when they’re between hosts.

Fittingly, because they prefer to feed on cattle and spend almost 90% of their lives in grassy pastures, they’ve picked up the nicknames “cattle tick” and “bush tick.”

But they don’t limit themselves to cows and farms. Foxes, white-tailed deer, coyotes, birds, sheep, chickens, pigs, dogs, cats, and even humans have been hosts to ALT; they’ve even been found on well-manicured lawns.

While their lifespan is generally a full year shorter than other three-host ixodid ticks (hard ticks like the American dog tick and blacklegged deer tick) common to the US, the ALT is similar in that it needs three separate hosts throughout its four life stages: egg, larvae, nymph, and adult. 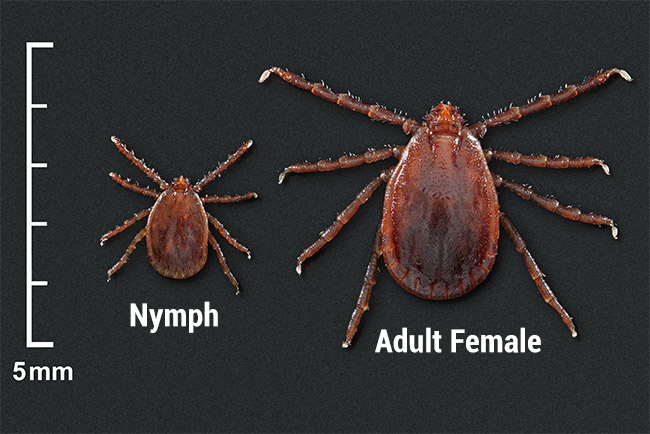 The egg stage begins as soon as an adult female drops from her last host to lay eggs, usually in late summer, and ends a few weeks later when the eggs hatch into six-legged larvae.

Depending upon the temperatures and humidity after hatching, the larvae will crawl up nearby grass or shrubs to await a suitable host that they’ll feed on over the winter — most commonly a small rodent or rabbit.

After the larvae molt into nymphs the following spring, it ejects itself from its first host to climb nearby vegetation in search of its second host, where it will feed until adulthood in mid to late summer.

Once an adult, it quickly seeks its next feast with its largest host, usually cattle or something human-sized at this stage. After its final feeding, the adult drops off its last host to lay eggs over a 14- to 21-day period — and the cycle continues.

What Makes Them Unique?

Perhaps the most interesting (and alarming) quality about this tick is how rapidly their population grows due to being parthenogenetic — able to reproduce asexually without the need for a male. While some types of ALT can mate with males, the strain found in the US doesn’t need their help to produce offspring.

Furthermore, these female ticks can lay thousands of eggs at one time, all hatching into females that will lay thousands of their own eggs in the following season. Their quick lifecycle makes it easy to see how difficult containing the spread of these ticks might be.

How to Spot an ALT

ALT are pretty unremarkable in terms of physical identification, which helps them easily blend in with the rest of the US tick population. However, there are a few subtle differences to notice. 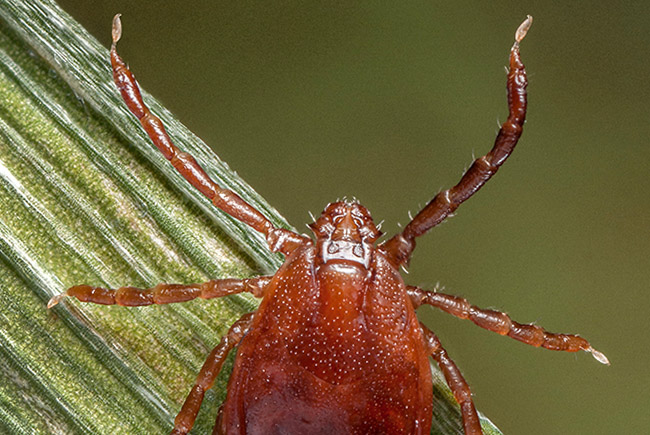 Because these ticks look so similar to others, the distinct characteristic of the ALT is the sheer number of ticks you’ll find on one host, and thousands of ALT may assemble on a single animal.

Another clue that it could be ALT is timing: August is the peak of reproduction, so you’re likely to encounter ALT more around this time of year, although their population remains highly active into the fall.

What Diseases Do They Carry?

ALT are aggressive biters and have been shown to cause almost half a dozen diseases in Asia, Australia, and New Zealand that infect both humans and animals, with some diseases causing severe illness.

But in the US, there haven’t been any reported cases of humans contracting tick-borne infections from ALT. While it’s still possible ALT in the US could carry pathogens that harm people, the types of infections and the frequency with which they transmit them are still being studied. Here’s what we do know:

Also called Dabie bandavirus, severe fever with thrombocytopenia syndrome (SFTS) is a life-threatening disease that has been reported in East Asia. The average fatality rate is between 12% and 30%, according to the journal Medicine, with cytokine storms (overactive immune response) being a chief cause of fatality.

And though no cases have been reported in the US, a similar bandavirus called Heartland virus is spread by Lone Star ticks, which bears a close genetic relationship with SFTS, raising concerns that ALT may be able to carry and spread Heartland in epidemic proportions. To date, no cases of Heartland virus have been found in the US ALT population, but one recent study found ALT is capable of carrying and transmitting the virus to mice in a laboratory setting, warranting further research.

ALT can carry and transmit certain spotted fevers, however, it’s unclear if they can be transmitted to humans. One study demonstrated that ALT could acquire Rickettsia rickettsii, also known as Rocky Mountain spotted fever (RMSF), by feeding on infected guinea pigs in a laboratory setting — and they could also infect other guinea pigs. However, more research is needed to understand if or how ALT actually acquires RMSF from hosts that live in nature and what impact that may have on human health.

Additionally, in Japan and South Korea, Rickettsia japonica, or Japanese spotted fever, is a tick-borne disease that can be transmitted to humans from ALT, but again, no cases have been reported in the US.

So far, the only infection carried to the US is bovine theileriosis (Theileriosis orientalis). The good news: This disease doesn’t affect humans, but it can cause severe blood loss and anemia in animals that have been infected. This malarial-like blood parasite primarily infects cattle, and diagnosing a herd can be difficult due to most presenting asymptomatically.

What About Lyme Disease?

Although ALT larvae have shown the ability to contract the Lyme-causing bacteria Borrelia burgdorferi while feeding on infected mice, the transmission process likely stops there. Research indicates that borrelia is lost during the molting phase from larvae to nymphs, so it’s unlikely that ALT will significantly contribute to Lyme disease transmission.

Are Humans at Risk?

We know ALT have a history of biting humans in other parts of the world, but it wasn’t until 2018 that the first human bite occurred in the US, and it was published in the journal Clinical Infectious Diseases:

A 66-year-old man from Yonkers, New York, with no travel history beyond his own manicured lawn for 30 days prior, had removed a tick from his right leg. Presumed to be a deer tick by his physician, the patient was treated with a standard dose of 200 mg of doxycycline. Later that day, the patient turned the tick into the Lyme Disease Diagnostic Center (LDDC) for testing, where its identification as an ALT was confirmed. The patient remained asymptomatic and never tested positive for Lyme disease or other tick-borne illnesses. 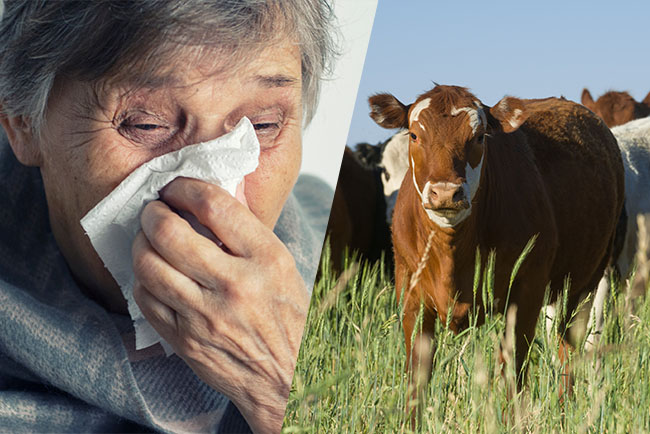 While humans are at risk of being bit by ALT, most often, their host of choice is animals, especially cattle. But research efforts are ongoing to find out which states and counties they reside in, other diseases they could carry, and whether they can transmit any of those diseases to humans.

The CDC suggests ALT may not be as attracted to human skin compared to recognized native ticks (deer ticks, Lone Star ticks, American dog ticks, etc.). However, you’ll still want to protect yourself and your pets using the same preventative strategies against any tick species.

You can protect your animals by following these guidelines from Cornell University’s Department of Agriculture.

You can protect yourself or your family by following the CDC-recommended guidelines.

What To Do if You Find Ticks

Finding a tick on you or your pet can be scary. If you encounter a tick bite, keep the following in mind:

If you find or remove a tick, you might not know what kind it is right off the bat. But getting your tick tested is one of the best ways to gain peace of mind and, if necessary, arm yourself with information to take to your healthcare provider. Although there’s still a lot to learn about ALT, you don’t have to avoid the great outdoors altogether. Thankfully, you can take action steps toward keeping yourself, your family, and your animals as safe as possible.

Comments Off on Asian Longhorned Ticks: Where They Came From + How To Spot Them