This invasive tick is cloning itself. Rutgers DNA researchers are racing to contain it.

It’s been months since an invasive, exotic species of tick was first spotted in the United States when it was found infesting sheep on a Hunterdon County farm.

The new pest, named H. longicornis or the longhorned tick, captured headlines because of its tendency to infest livestock in the thousands and its ability to reproduce by essentially cloning itself.

But much about the tick remains unknown.

In a laboratory on the edge of the the Rutgers’ Cook Campus in New Brunswick, a team of scientists is studying DNA to try and unravel the mystery of the longhorned tick.

Tick DNA, that is.

About the new tick

The longhorned tick, a native of China, Russia and the Korean Peninsula, was discovered in New Jersey last November.

The tick is primarily a threat to livestock, particularly in Australia and New Zealand where the tick has proved to be a torment to cattle farmers. The tick, particularly in its native range, is known to carry disease that can affect humans but it is rare that it actually bites people.

None of the longhorned ticks that have been discovered in New Jersey have been found to carry disease. The state continues to view the invasive pest as primarily a threat to livestock.

After the longhorned tick was identified on a Hunterdon County farm, scientists and state officials had hoped that a cold New Jersey winter would freeze the ticks out of the state.

Scientists were disappointed in April, however, when the ticks reappeared at the Hunterdon County site, proving that the species had overwintered and was now established in the state.

Since then, the tick has been the focus of increased attention. It was found in Union County in April, Middlesex County in May and Mercer County in June. The tick has always been found in grassy areas near woods.

In another twist, a tick found on a dog in Union County in 2013 was retested and discovered to be a longhorned tick, establishing that the tick has been in New Jersey since at least then.

“This is not surprising at all,” said Dina Fonseca, the director of the Rutgers Center for Vector Biology. “Usually by the time you find it, an invasive species has already been in the country for many many years.” 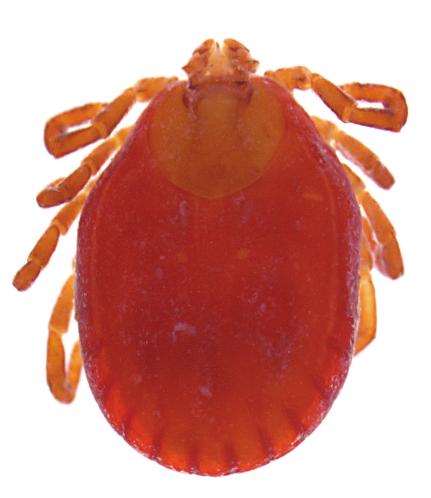 It is still unknown just how the tick got to the U.S., but the latest theory is the idea that it arrived on a dog.

Both Fonseca and Andrea Egizi, a researcher at the Monmouth County Tick-Borne Disease Laboratory, said that livestock entering the country is subject to rigorous customs inspections, while domestic dogs are only tested for rabies.

It would be much easier for a tick to go undetected on a dog than a cow. 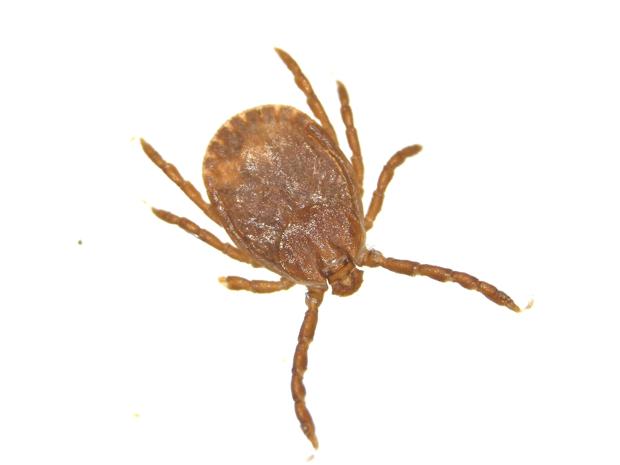 What DNA can tell us

Just where the longhorned tick came from remains unknown, and that uncertainty affects how the state and federal scientists and officials are reacting to the situation.

If the tick came from its native East Asian range, for instance, it could be considered more of a threat to people. If it came from Australia or New Zealand, it may be more resistant to insecticides and treatment methods in New Jersey may have to be adapted.

DNA can give insight in this situation. Scientists can compare the DNA of the ticks found in New Jersey to ticks in Asia and Australia; whichever comparison is most similar is where the tick originated.

Ticks in other states?

Since the November discovery in Hunterdon County, the tick has since been found in Arkansas, Virginia and West Virginia. Scientists are unsure how those ticks related to the population in New Jersey, and it is possible that there have been multiple introductions of the tick to the United States.

Here again, comparing DNA from ticks found in the different places can help scientists answer those questions and potentially map how the tick is spreading through the country. 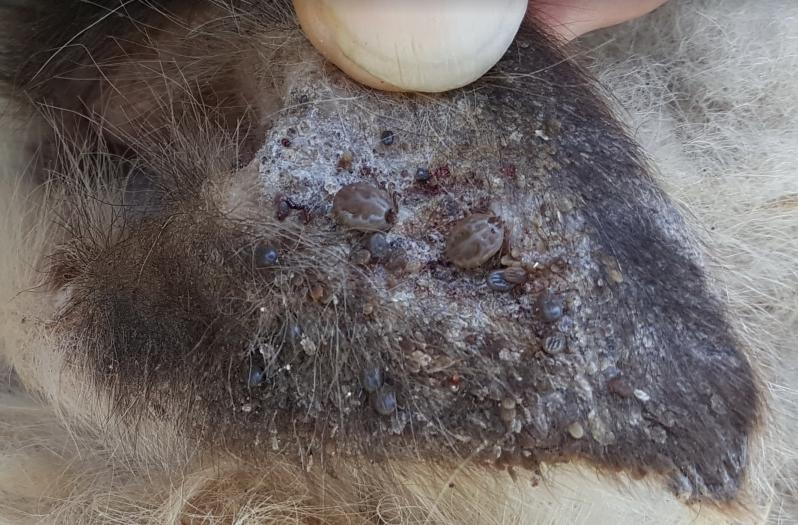 But the most pressing question with these ticks is what kind of threat they pose, and DNA can help answer that question as well.

Besides analyzing the genetics of the tick, scientists are able to also study the DNA of any pathogens it may be carrying. 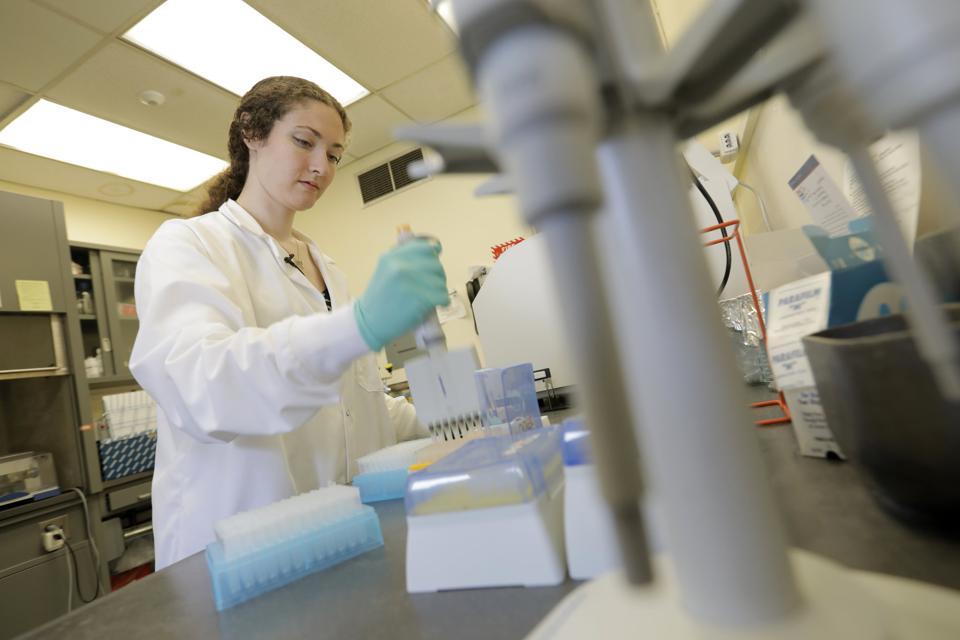 How the work is done

All of this work is done as a collaboration between Rutgers and Monmouth County. The DNA work is tedious; it takes about two days to go through the process of extracting and analyzing the DNA for each round of ticks.

“I really enjoy working with DNA and I find it very interesting work,” Egizi said. “So it doesn’t feel like it’s that tough to me.”

To get the DNA, the scientists first use equipment to smash the ticks into bits.

Then they use chemical solutions to collect and clean the DNA from the now destroyed arachnid. Once the DNA samples are ready to go, scientists place them in machines that amplify the samples so they can be read by a computer.

Finally, the scientists can study the DNA.

Challenges with the new tick

The longhorned tick is uniquely challenging for DNA analysis because of how it reproduces.

The pest is a parthenogenetic species, meaning that the females can lay and hatch eggs without needing to mate with a male. Each offspring is essentially a clone of the mother tick, making it difficult to differentiate individual ticks within a population.

Egizi said that working on the new tick has been more exciting than her typical work and described dealing with the new species as “like being on a T.V. show.”

“Of course I wish that it hadn’t happened because I think we’d all be better off without another tick to worry about,” Egizi said. “But the fact that it has happened and now we have to figure out what to do next has been really interesting and unusual to be involved with.” 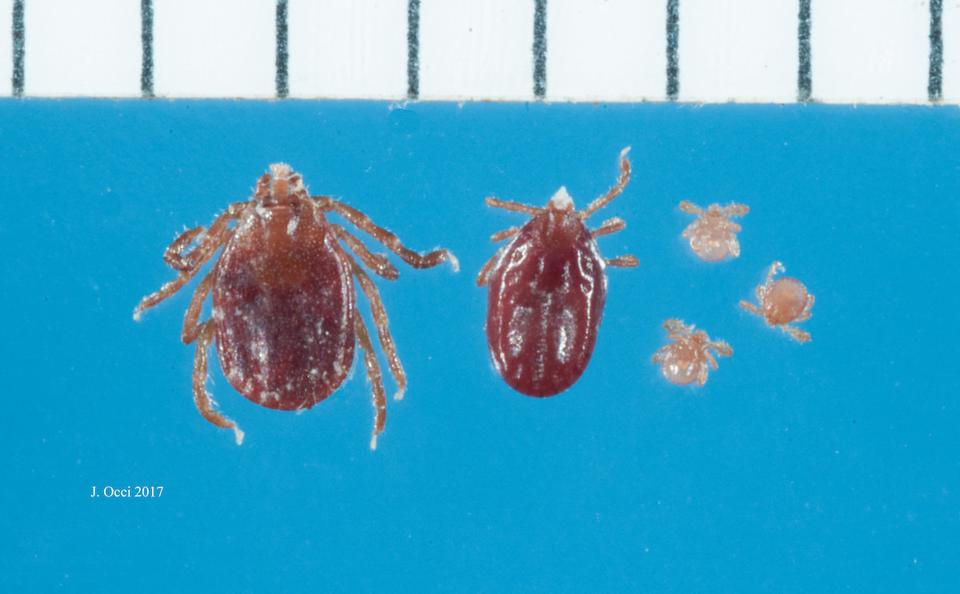 Understanding the longhorned tick is crucial because it is likely here to stay. Egizi said there is evidence that the tick is now feeding on wildlife like deer, and it has likely spread to even more areas.

“Once they get into the wildlife its like opening Pandora’s Box. You can’t really get them all back in there and close it again,” Egizi said.

Still, Fonseca said nothing is certain and there may still be a chance of eliminating the new ticks from the state using localized insecticide treatment at the discovery areas.

“[The tick] is still limited, and it would be a shame that we would simply assume that its so spread out at this point to that its not worth trying to go for the e-word: elimination,” Fonseca said.

Keep your family safe from ticks this summer with these tips

It’s also spread to New York and North Carolina and is probably coming to a town near you soon:  https://madisonarealymesupportgroup.com/2018/07/18/asian-tick-now-in-new-york/

The pressing question is what all do they transmit?  We know this so far:  https://madisonarealymesupportgroup.com/2018/06/12/first-longhorned-tick-confirmed-in-arkansas/

It spreads SFTS (sever fever with thrombocytopenia syndrome), “an emerging hemorrhagic fever,” causing fever, fatigue, headache, nausea, muscle pain, diarrhea, vomiting, abdominal pain, disease of the lymph nodes, and conjunctival congestion, but the potential impact of this tick on tickborne illness is not yet known. In other parts of the world, this Longhorned tick, also called the East Asian or bush tick, has been associated with several tickborne diseases, such as spotted fever rickettsioses, Anaplasma, Ehrlichia, and Borrelia, the causative agent of Lyme Disease.

For a 2016 literature review on SFTS: http://infectious-diseases-and-treatment.imedpub.com/research-advances-on-epidemiology-of-severefever-with-thrombocytopenia-syndrome-asystematic-review-of-the-literature.php?aid=17986
Although the clinical symptoms of SFTS and HGA are similar to each other, but the treatment methods of the two diseases are totally different. Doctors notice that the biggest difference between the clinical symptom of SFTS and HGA is that SFTS patients generally without skin rash, the dermorrhagia is also not seriously, and few massive hemorrhage cases were reported [23]. It is also reported that SFTS patients had gastrointestinal symptoms, such as nausea, vomiting, and diarrhea, which are rarely observed in HGA patients [2]. So these differences can be used as the auxiliary basis of differential diagnosis.
At present, there is still no specific vaccine or antiviral therapy for SFTSV infection. Supportive treatment, including plasma, platelet, granulocyte colony stimulating factor (GCSF), recombinant human interleukin 11, and gamma globulin is the most essential part of case treatment [44]. Meanwhile, some measures were taken to maintain water, electrolyte balance and treat complications are also very important.
Ribavirin is reported to be effective for treating Crimean-Congo Hemorrhagic Fever (CCHF) infections and hemorrhagic fever with renal syndrome, but it is still inadequate to judge the effect of ribavirin on SFTS patients because of the study limitation without adequate parameters were investigated [45]. Host immune responses play an important role in determining the severity and clinical outcome in patients with infection by SFTSV.
For Viral treatment options: https://madisonarealymesupportgroup.com/2016/03/28/combating-viruses/

And lastly, please know ticks parasitize one another, potentially spreading all manner of diseases to humans.  This fact also shoots holes in the regurgitated mantra that only certain ticks carry certain pathogens.  If they are feasting on one another, they can potentially infect each other and then us:  https://madisonarealymesupportgroup.com/2018/03/07/tick-bites-tick-hyperparasitism/

Comments Off on Rutgers Racing to Contain Asian Longhorned Tick