How Prevalent is Bartonella?

How prevalent is Bartonella in people who have Lyme disease? 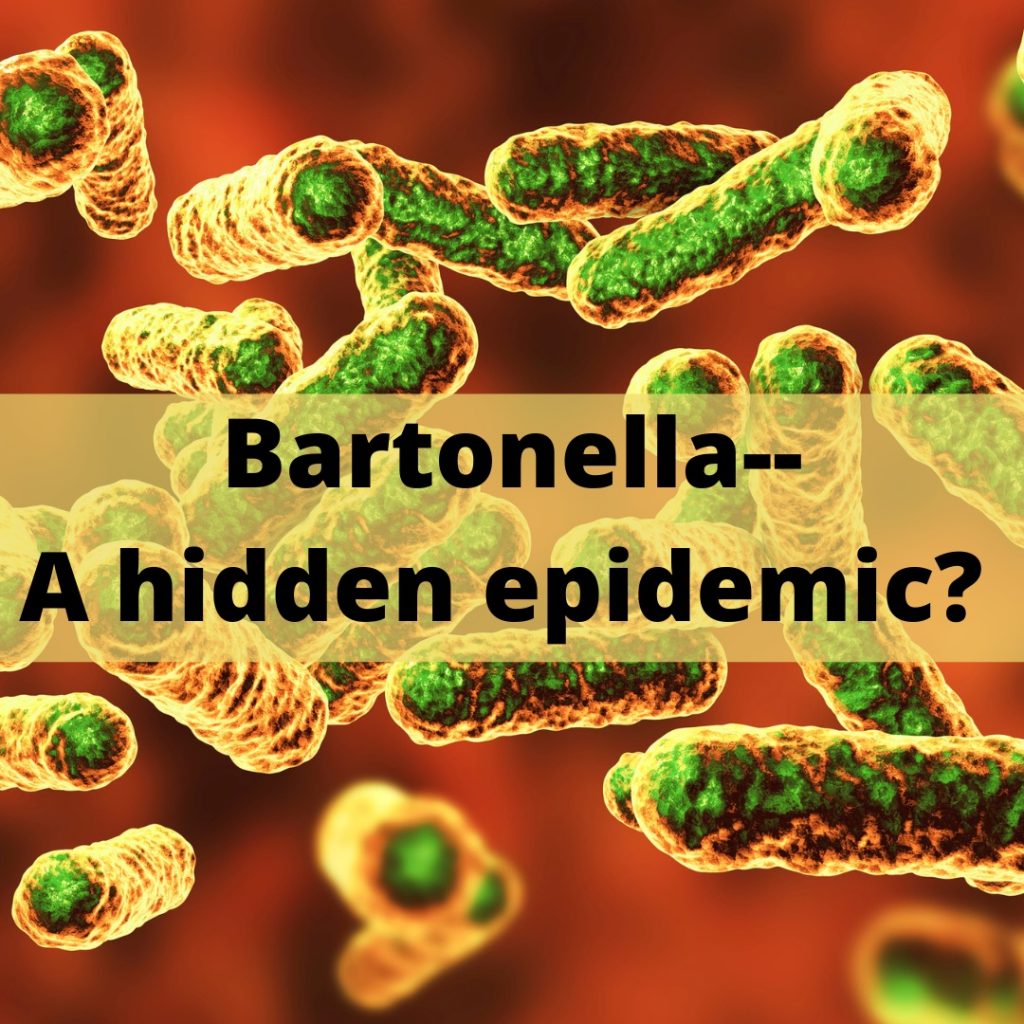 At a meeting of the federal Tick-Borne Disease Working Group on March 1, Ben Beard, PhD of the CDC made a highly significant statement that passed without remark at the time.

Beard’s statement was in reply to a comment by Monica Embers, PhD, also a member of the working group. Embers noted that several slides from Beard’s Clinical Presentation and Pathogenesis subcommittee mentioned neuropsychiatric illness and neuropathic manifestations of Lyme disease.

“We’re seeing a lot more neuropsychiatric disease associated with Bartonella,” said Embers. “I’m wanting to hear more about your thought process and your recommendation with respect to bartonellosis?”

“In my view Bartonella is ubiquitous. There are multiple different Bartonella species. A lot of people are exposed to cats and fleas, and Bartonella henselae–or cat scratch disease–is pretty common. Our group looked at it as an illness that is associated with people with other tick-borne illnesses. Not necessarily agreeing that it’s tick-borne—for me the jury is still out for that—but I’m perfectly convinced that it is very common, and that it may be confounding the diagnosis, and that it is an important co-infection. We need not get side-tracked on whether or not it’s tick-borne. We need to agree that it’s a common infection, commonly seen in patients with other illnesses, and it can have a significant impact on clinical outcome and presentation.”

The CDC has long declined to categorize bartonellosis as tick-borne and has not considered it a co-infection of Lyme.

Even today, the CDC website states: “Ticks may carry some species of Bartonella bacteria, but there is currently no causal evidence that ticks can transmit Bartonella infection to people through their bites.”

Yet, as Beard observed, Bartonella is very common in people with Lyme disease.

What the data says

Bartonella does not respond to standard treatment for Lyme disease, and it is notoriously difficult to detect through standard tests. Moreover, Bartonella is not included in standard surveillance testing for ticks, and cases of the disease are not tracked by the CDC

Which leads me to the elephant in the room: nobody knows how many cases of bartonellosis there are in the US—or anywhere else for that matter.

Bartonellosis is caused by one of many species of the bacterium Bartonella. It is harbored in wild and domestic animals, and can be transmitted to humans through a number of different pathways including fleas, flies, lice, animal bites, animal scratches, ticks, bedbugs, and possibly through maternal fetal transmission. (Maggi RG, et al., 2015; Reis C, et al., 2011)

First identified in 1990, Bartonella henselae bacteria is the most common cause of bartonellosis in humans. Bartonella henselae infection, also called cat scratch disease, is frequently caused by flea bites or the scratch of an infected cat. The primary reservoirs for B. henselae across the world are domestic and stray cats, and the primary vector is the cat flea (ctenophalides felis). (Breitschwerdt, E.B., 2017)

We now know that these bacteria have been infecting humans for thousands of years. Researchers discovered Bartonella quintana in a 4,000-year-old human tooth in France. (Drancourt M., et al., 2005)

Today, at least 40 different species of Bartonella have been identified.  About half of them are known to cause symptoms in humans or animals.

Bartonella is a stealth pathogen

At a recent conference, Dr. Ed Breitschwerdt, DVM, a leading expert in the field,  explained how Bartonella can invade and “literally affect every system in the body.” This includes the: cutaneous, muscular, skeletal, endocrine, cardiovascular and nervous systems.

He reviewed several recent studies implicating Bartonella infection in the brain in relation to several neuropsychiatric and autoimmune manifestations.

According to Breitschwerdt, these bacteria are extremely difficult to find in humans because they are slow growing and can hide within cells.

He explained how Bartonella, which are intracellular bacteria, have the ability to:

The symptoms of bartonellosis can range from mild to life-threatening, depending on the Bartonella species and the health of those infected. Furthermore, a growing body of evidence links Bartonella to neuropsychological symptoms.

The table below lists the known species of Bartonella associated with human disease, the most common symptoms as well as the reservoir host and vector.

How a stealth pathogen may prolong your chronic illness

In fact, Bartonella henselae was discovered in the 1990s during the AIDS epidemic. Because  the HIV virus causes an acquired immune deficiency, these patients were extremely susceptible to new infections and reactivation of latent infections. In this patient population, Bartonella caused a distinctive skin lesion called bacillary angiomatosis (BA), and a type of liver disease called peliosis hepatis. (Breitschwerdt, E.B., 2017)

Advanced, disseminated disease is more likely to occur in immunocompromised patients or those taking immunosuppressive drugs. Without proper treatment, the infection can spread systemically throughout the body. The result is sometimes fatal.

When the co-infection becomes the main infection

This makes me wonder. How many people with chronic Lyme disease had a latent Bartonella infection that was re-activated when their immune system became impaired?

I believe this was the case with my daughter. We live on a farm with lots of animals, including cats. Veterinarians, cat owners, and people who live or work on farms are at increased risk for Bartonella.

It wasn’t until my child became deathly ill after contracting Ehrlichia chaffeensis that her Bartonella symptoms began.

The symptoms that stood out were the constant migraine/headache, memory loss, bone pain, painful soles of feet, relapsing fever, insomnia, nighttime hallucinations that made everything look like Whoville, POTS, skin marks (striae) that resembled stretch marks, swollen lymph nodes, and an immune system so impaired it led to a temporary misdiagnosis of HIV. What a horrific experience for all of us!

Because  Bartonella may hide inside of cells and only emerge periodically, you may need to test multiple times to find a confirmatory diagnosis. And in patients who are immunocompromised, the test may not turn positive until after treatment has begun.

Research led by Ricardo Maggi, Ed Breitschwerdt and colleagues has led to the development of a new digital PCR that is much more sensitive to Bartonella. Even still, Dr. Maggi recommends running multiple types of tests (IFA serology, PCR, culture, and microscopy).

According to Dr. Joseph Burrascano, one should consider bartonellosis when symptoms persist after treatment for Lyme disease. Especially when the neurological symptoms are out of proportion to the common symptoms of disseminated Lyme disease.

Just as with Lyme disease, the longer Bartonella goes untreated, the more difficult it is to treat.  Furthermore, the standard treatment for Lyme (doxycycline) is ineffective against Bart. As Dr. Breitschwerdt famously said, “You cannot float humans or horses in enough doxycycline to kill this bacteria.”

According to the CDC: “A number of antibiotics are effective against Bartonella infections, including azithromycin, penicillins, tetracyclines, cephalosporins, aminoglycosides, and macrolides. More than one antibiotic is often used. Consult with an expert in infectious diseases regarding treatment options.”

Dr. Burrascano says, treating Bartonella-like organisms “can be difficult, as drug resistance can rapidly develop to macrolides and fluoroquinolones when used as a single agent and solo courses of tetracyclines are ineffective.”

In 2021, a new Bartonella Research Consortium was formed with a $4.8 million grant from The Steven & Alexandra Cohen Foundation.

The consortium includes Ed Breitschwerdt and Ricardo Maggi of North Carolina State University, Monica Embers of Tulane University, and Timothy Haystead of Duke University, who is continuing the work of the late Dr. Neal Spector.

The team is actively working towards creating a targeted treatment for bartonellosis and quickly getting the drug to the marketplace for use in both animals and humans.

It’s time medicine moves beyond the one-pathogen-one-disease model. Let’s face it, ticks are full of toxic soup. Because each pathogen interacts with the host in unique ways, extensive research is needed to understand all factors surrounding co-infections and Lyme disease. (Moutailler S, et al., 2016)

Understanding the complex nature of these pathogens, how they impact the immune system, and how other bacterial and viral factors shape illness, will be key in improving public health. (Cheslock, M. A., & Embers, M. E., 2019)

It’s time for the CDC, NIH, HHS, the Tick-Borne Disease Working Group and other researchers to start looking deeper into the prevalence of Bartonella infections–not just in patients with Lyme disease but in all patients with poorly-defined chronic illnesses.

LymeSci is written by Lonnie Marcum, a Licensed Physical Therapist and mother of a daughter with Lyme. She has served two terms on a subcommittee of the federal Tick-Borne Disease Working Group. Follow her on Twitter: @LonnieRhea  Email her at: lmarcum@lymedisease.org.

Excellently written.  Bartonella is a real problem out here, but the CDC is just sipping on margaritas.

Comments Off on How Prevalent is Bartonella?

Millions Will Die From COVID “Vax” by 2028: Dr. David Martin

Does Unrecognized Lyme in Mothers Lead to Autism Spectrum Disorder?