Reactivated Infections: A Possible Piece of the Chronic Illness Puzzle

Reactivated Infections: A Possible Piece of the Chronic Illness Puzzle 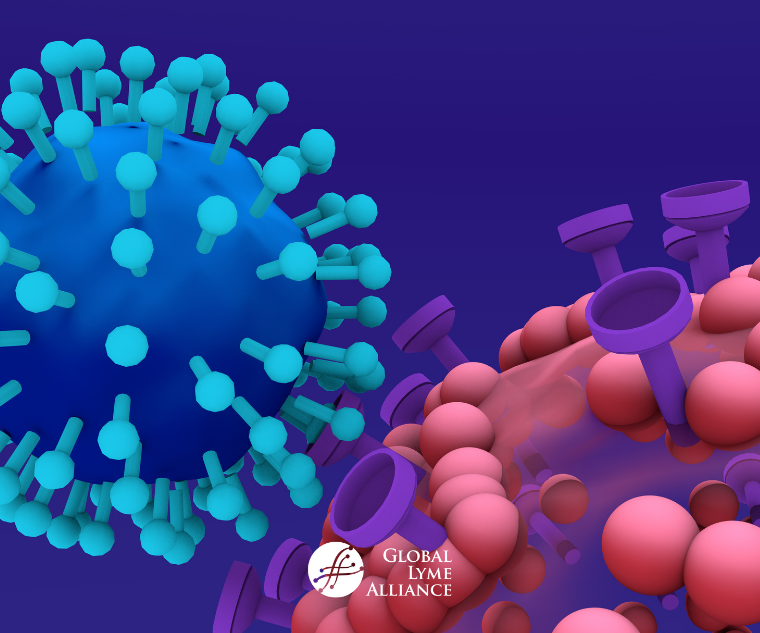 Did you know that old infections can get reactivated due to COVID-19 or tick-borne illness?

For almost two years now, comparisons have been drawn between long-haul COVID-19 and long-haul tick-borne illness. In addition to many overlapping symptoms including persistent fatigue, brain fog, and pain, questions about the cause of these long-haul symptoms are also similar: Is it ongoing infection? Is it a dysregulated immune system? Is it inflammation? The answers may not be mutually exclusive.

There may also be another factor at play: old infections that get reactivated as a result of acute COVID-19 or tick-borne illness.

Many of us have dormant infections in our bodies. Those of us who had chicken pox as kids still carry varicella-zoster virus. For most of us, that virus stays dormant forever, but for some—particularly those who are immunocompromised or who suffer extreme stress—the virus can reactivate later as shingles.[i]

Another example is Epstein-Barr virus, which causes mononucleosis. While 95% of adults probably carry this virus, for many it is always dormant, and they don’t even know they have it [ii]. Others, like myself, are not so lucky. My own case of infectious mononucleosis dragged on, slipping into chronic active Epstein-Barr virus. Though my acute symptoms of swollen glands and sore throat cleared up, fatigue, and low-grade fever persisted for two years. I later learned that my body could not adequately fight Epstein-Barr because I also had underlying, untreated tick-borne infections including Lyme disease, babesiosis, ehrlichiosis, and possible bartonella. I spent another several years battling those tick-borne illnesses into remission, including one shattering relapse. So focused was on I treating those infections—which also caused fatigue and fever—that I sometimes forgot I had Epstein-Barr virus.

But the body does not forget. A few years ago, after a particularly stressful period in my life, I had a minor flare-up of symptoms. Though not bedridden again, I was more tired than usual. Long-gone joint and muscle aches returned. I panicked that my tick-borne illnesses were back in full force. And while they were reactivated a bit, tests revealed that what was really flaring was Epstein-Barr virus. I’d forgotten that the virus that had originally sent me to bed all those years ago could come back, too.

That episode was an important wake-up call to me, and I hope it will be for other Lyme warriors too: not all symptoms we have are Lyme-related. We have to remember what else our bodies harbor, what else can reactivate when our immune systems are down.

On the flip side, we also have to remember that Lyme can be a relapsing illness, as my doctor describes it. Research proves that Lyme bacteria can persist after antibiotic treatment. This means that the bacteria can lie dormant, and slowly start replicating at a later point, particularly if the body is under some kind of stress. “High level stress is like walking into a minefield of ticks,” my doctor once said. Stress can be external, like from a tough job situation or a hard breakup. It can also be physical, like from an acute illness such a cold or COVID-19.

Luckily, my own long-haul case of COVID-19 did not cause a flare-up of any of my underlying infections. My doctors hope this means that as I’ve grown healthier over the years, my body has become more resilient. But other COVID-19 long-haulers have experienced reactivation of other illnesses, like the patients described in “For These 17 COVID Long Haulers, Reactivated Viruses May Be to Blame” on verywellhealth.com.

For all of us long-haulers, it’s important that we don’t get tunnel vision about the illnesses we deal with on a day-to-day basis. We must also consider other, older infections in our bodies, and how they might impact recovery.

Many avoid stating it, but vaccines can also be a physical stress that can reactivate latent infections.  I’ve witnessed this personally in Lyme/MSIDS patients who have had symptoms come roaring back after getting a vaccine.  Vaccines are not without risk and for Lyme/MSIDS patients they pose a significant risk due to an already dysfunctional immune system and an overwhelming amount of inflammation.

Comments Off on Reactivated Infections: A Possible Piece of the Chronic Illness Puzzle

Another Embalmer Speaks: 93% Have Deadly Clots Caused by COVID Shots

Lyme Disease: The New Pharma Frontier That Will Never Happen