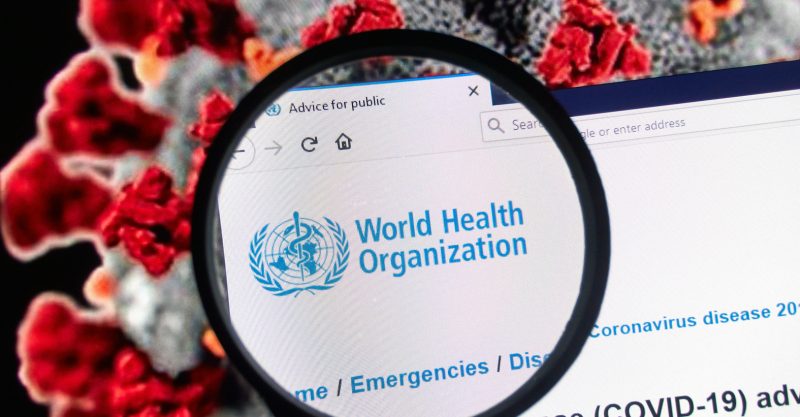 An outspoken proponent of government-led tactics to influence public opinion on policy and to undermine the credibility of “conspiracy theorists” will lead the World Health Organization’s (WHO) efforts to encourage public acceptance of a COVID-19 vaccine, Children’s Health Defense has learned.

Last week, WHO’s general director, Dr. Tedros Ghebreyesus, tweeted that he was glad to speak with the organization’s Technical Advisory Group (TAG) on Behavioural Insights and Sciences for Health to “discuss vaccine acceptance and uptake in the context of COVID-19.”

In his next tweet Ghebreyesus announced that Cass Sunstein, founder and director of the Program on Behavioral Economics and Public Policy at Harvard Law School, will chair the advisory group, which was created in July.

Sunstein was former President Barack Obama’s head of Office of Information and Regulatory Affairs where he was responsible for overseeing policies relating to information quality.

In 2008, Sunstein wrote a paper proposing that governments employ teams of covert agents to “cognitively infiltrate” online dissident groups and websites which advocate “false conspiracy theories” about the government. In the paper, Sunstein and his co-authors wrote:

“Our principal claim here involves the potential value of cognitive infiltration of extremist groups, designed to introduce informational diversity into such groups and to expose indefensible conspiracy theories as such.”

The government-led operations described in Sunstein’s paper would work to increase faith in government policy and policymakers and undermine the credibility of “conspiracists” who question their motives. They would also maintain a vigorous “counter misinformation establishment” to counter “conspiracy” groups opposed to government policies that aim to protect the common good.

Some of this would be accomplished by sending undercover agents, or government-paid third parties, into “online social networks or even real space groups.”

WHO has already contracted the public relations firm, Hill + Knowlton. The PR giant, best known for its role in manufacturing false testimonies in support of the Gulf War, was hired by WHO  to “ensure the science and public health credibility of the WHO in order to ensure WHO’s advice and guidance is followed.”

WHO paid Hill + Knowlton $135,000 to identify micro-influencers, macro-influencers and “hidden heroes” who could covertly promote WHO’s advice and messaging on social media, and also protect and promote the organization’s image as a COVID-19 authority.

There’s no evidence that WHO has yet implemented any “cognitive infiltration” policies similar to what Sunstein advocated in 2008. If the organization were to adopt such a strategy, and use it to convince hesitant populations to take a COVID vaccine, it would raise questions of legality.

As put forward in a report by the Congressional Research Service, illegal “publicity or propaganda” is defined by the U.S. Government Accountability Office (GAO) to mean either (1) self-aggrandizement by public officials; (2) purely partisan activity; or (3) “covert propaganda.” By covert propaganda, GAO means information which originates from the government but is unattributed and made to appear as though it came from a third party.

Because WHO is a multinational organization and not a U.S. Government agency, covert “cognitive infiltration” policies could fall into a gray area, or even be considered legal.

Dr. Margaret Chan, former general-director of WHO, once stated that the organization’s policies are “driven by what [she called] donor interests.”

According to a 2012 article in Foreign Affairs, “few policy initiatives or normative standards set by the WHO are announced before they have been casually, unofficially vetted by Gates Foundation staff.” Or, as other sources told Politico in 2017, “Gates’ priorities have become the WHO’s.”

WHO’s current general director, Ghebreyesus, was previously on the board of two organizations that Gates founded, provided seed money for and continues to fund to this day: GAVI, the Vaccine Alliance, a public–private global health partnership focused on increased access to vaccines in poor countries, and the Global Fund, which says it aims to accelerate the “development, production and equitable global access to safe, quality, effective, and affordable COVID-19 diagnostics, therapeutics and vaccines.”

If, as Politico put it, “Gates priorities have become the WHO’s,” and if WHO’s policies are driven by “donor interests,” this raises questions as to what online groups, people and websites would be targeted by such covert programs.

The idea of government agents carrying out psychological operations on social media is not far fetched. Earlier this year the head of editorial for Twitter’s Middle East and Africa office was outed as an active officer in the British Army’s psychological warfare unit, known as the 77th brigade, which specializes in online behavioral change operations.

Jeremy Loffredo is a reporter for Children’s Health Defense.

Hopefully this makes it crystal clear that there is a concerted, full-frontal assault against those who even dare to question vaccine safety or the COVID narrative.  This attack has been going on since the beginning of medicine.  All those considered a threat or who defy the narrative are hunted down and bullied.  Practitioners lose their licenses, are fired, are investigated by the ‘powers that be’, and are attacked on every possible front.

Probably the worst of all is the smear campaigns:  https://madisonarealymesupportgroup.com/2018/03/28/the-truth-never-stood-in-the-way-of-a-good-story-how-to-be-wakefielded/

This happened recently to an experienced epidemiologist who also authored The Great Barrington Declaration which simply takes a more focused approach regarding COVID measures:   https://madisonarealymesupportgroup.com/2020/11/17/author-of-the-great-barrington-declaration-i-did-not-accept-payment/  Excerpts:

I was utterly unprepared for the onslaught of insults, personal criticism, intimidation and threats that met our proposal. The level of vitriol and hostility, not just from members of the public online but from journalists and academics, has horrified me.

Yet of all the criticisms flung at us, the one I find most upsetting is the accusation that we are indulging in ‘policy-based evidence-making’ — in other words, drumming up facts to fit our ideological agenda.

What You Need to Know About Borrelia Miyamotoi