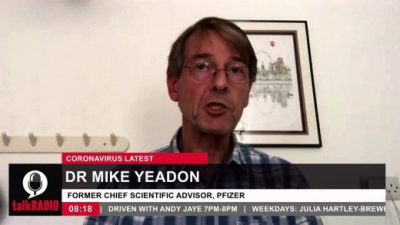 In a stunning development, a former Chief Science Officer for the pharmaceutical giant Pfizer says

“there is no science to suggest a second wave should happen.” The “Big Pharma” insider asserts that false positive results from inherently unreliable COVID tests are being used to manufacture a “second wave” based on “new cases.”

Dr. Mike Yeadon, a former Vice President and Chief Science Officer for Pfizer for 16 years, says that half or even “almost all” of tests for COVID are false positives. Dr. Yeadon also argues that the threshold for herd immunity may be much lower than previously thought, and may have been reached in many countries already.   (See link for article)

In an interview, Yeadon agreed that government, economic, and civil liberties policies are all based on completely FAKE data, and that the “pandemic is fundamentally over.”

Yeadon and his colleagues wrote a paper called, “How Likely is a Second Wave?”.

In the scientific paper, Yeadon et al write that COVID-19 is not entirely novel, but we’ve heard that before:  https://madisonarealymesupportgroup.com/2020/07/10/coronavirus-why-everyone-was-wrong/

Regarding the PCR, Yeadon emphatically states that more than HALF of the positives are likely to be false and potentially all of them, but we’ve heard that before too:  https://madisonarealymesupportgroup.com/2020/08/09/gov-mike-dewine-of-ohio-tests-positive-then-negative-for-coronavirus/

Lastly, regarding a ‘second wave’, Yeadon states that any government case for lockdowns, which haven’t worked yet, will be entirely manufactured.

Regarding Ferguson’s model, which Yeadon severely criticizes, he further states that although most scientists don’t believe it to be even ‘faintly right,’ governments are still following it.

Yeadon, along with many others, is bitter about the deaths caused BY the lockdowns and from those that might be further lost if lockdowns are reimposed.

The author of the article then gives a frightening quote from US Representative Thomas Massie (R-KY) when he said on the Tom Woods Show on August 16th:

“The secret the government is keeping from you is that they plan to keep us shut down until there is some kind of vaccine, and then whether it’s compulsory at the federal level, or the state level, or maybe they persuade your employers though another PPP program that you won’t qualify for unless you make your employees get the vaccine, I think that’s their plan. Somebody convince me that’s not their plan, because there is no logical ending to this other than that.”

He further quoted Bobby Kennedy Jr. who warned of the existence of a:

“bio-security agenda, the rise of the authoritarian surveillance state and the Big Pharma sponsored coup d’etat against liberal democracy…The pandemic is a crisis of convenience for the elite who are dictating these policies.”

Comments Off on Chief Science Officer for Pfizer Says “Second Wave” Faked on False-Positive Tests, “Pandemic is Over”

The Only ‘Circuit Break’ in the Pandemic We Need Now is From the Government’s Doom-Mongering Scientific Advisers Who Specialize in Causing Panic and Little Else, Say Prof Carl Henneghan and Dr. Tom Jefferson

And those Face Shields -They Don’t Work Either