Giant Ticks Which Hunt Their Prey Confirmed in the Netherlands

Giant ticks which hunt their prey confirmed in the Netherlands 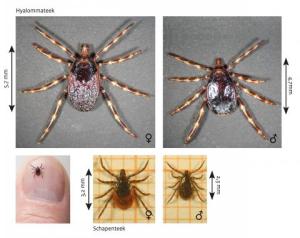 The giant tick found in Drenthe last week has been confirmed as a Hyalomma marginatum, a species originating in tropical climates and previously confined to southern parts of Europe. The ticks, thought to be brought in by migrating birds, have striped legs and their body is almost twice the length of ticks normally found in the Netherlands. This can grow to around two centimetres when they are engorged with blood. Unlike common ticks, the giant tick actively hunts its prey and can identify targets up to nine metres away. They have also been observed follow their target for ten minutes or more, walking or running a distance of up to 100 metres, according to the European centre for disease prevention and control. The ticks are known to carry several diseases, including Crimean-Congo Hemorrhagic Fever but this tick was not a carrier, the public health institute RIVM said. The tick was, however, carrying bacteria which can cause Spotted Fever (Rickettsia aeschlimannii), which is rare but easily treated by antibiotics. Spotted Fever was also found in ticks in Austria last year. The Drenthe tick is the second Hyalomma to be found in the Netherlands. One was identified in eastern Gelderland in early July. Examples of the ticks have been found in several other northern European countries including Germany, where it is thought to have overwintered, and Sweden. Most have been found in livestock, primarily horses.

Never believe authorities that state something is “rare” and “easily treated with antibiotics,”  in relation to Lyme/MSIDS. Coinfection, persistence, and prevalence are issues authorities have yet to study.

“In one of the specimens found, we were able to prove the pathogen of a tropical form of tick typhus.”

Typhus, a bacteria, is making a comeback, particularly in the South. Common in the U.S. in the 40’s, and normally attributed to lice, now it’s been proven to be in a tick. In other words, another disease and a tick found where they supposedly shouldn’t be.

Divided into the typhus group and the spotted fever group, disease is transmitted through ectoparasites (fleas, lice, mites, and ticks). Inhalation and inoculating conjunctiva with infectious material can also cause disease.  The good news for most is that doxycycline is a front-line drug for it.  Broad-spectrum antibiotics aren’t helpful.

Tularemia, brucellosis, Q-fever, and typhus are all diseases spread by ticks that have been bioweaponized:  https://en.wikipedia.org/wiki/United_States_biological_weapons_program#Agents_studied_and_weaponized

Interesting footnote on CCHF – it is considered by the Federation of American Scientists to be a biological threat agent:  https://fas.org/biosecurity/resource/agents.htm#cchf

According to this: https://wordpress.utoledo.edu/disastermedicine/category/cchf/  There have been 5 recent cases of CCHF and one was a nurse who became infected by taking care of a patient.  http://outbreaknewstoday.com/uganda-reports-cchf-death-ebola-ruled-15582/

To listen to an audio on CCHF: http://outbreaknewstoday.com/crimean-congo-hemorrhagic-fever-increasing-spread-predicted-33818/  While this gets political at the end, the question of allowing people back into the U.S. with a serious known infection that is transmittable is a huge topic of importance that deserves a whole lot more attention than a few minutes:  https://www.govinfo.gov/content/pkg/USCODE-2014-title42/html/USCODE-2014-title42-chap6A-subchapII-partG-sec264.htm

Ticks are marvelously ecoadaptive. Warmer winters are actually lethal to black legged ticks. When ticks are stressed they find leaf litter and/or snow to hide under.

It is far more likely ticks are spreading due to migrating birds and other reservoirs as well as being tweaked in a lab to be more pathogenic than having anything to do with the climate:  https://madisonarealymesupportgroup.com/2019/07/19/biological-warfare-experiment-on-american-citizens-results-in-spreading-pandemic/

The Aches & Pains of Tick-borne Illnesses