Scientists in Germany have discovered a tropical tick which can grow up to an INCH LONG – 10 times bigger than a common tick.

The ticks, known as Hyalomma marginatum have the potential to spread the viral disease Crimean-Congo fever (CCHF).

Symptoms of CCHF include fever, muscle pains, headache, vomiting, diarrhoea, and bleeding into the skin. A QUARTER of those contracting Crimean-Congo fever will die.

Researchers have blamed the unusually hot weather over Europe for the cause of the ticks movement northwards as more birds have migrated to Europe following the scorching temperature. (Please see comment at end of article)

Seven of the species were discovered this year – previously there have only been two examples of tropical ticks in Germany, one in 2015 and another in 2017.

Scientists are now concerned that as the warm temperatures continue to become more common in Germany, France and the UK the ticks could settle there and migrate across Europe permanently.

Parasitologist Ute Mackenstedt from the University of Hohenheim in Stuttgart said: “We assume that we have to reckon with more and more tropical species of ticks in Germany that can settle here due to good weather conditions.” 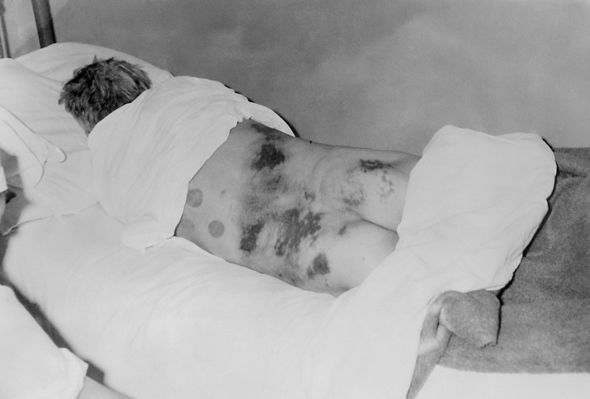 Dr Lidia Chitimia-Dobler, tick expert at the University of Hohenheim and the Institute for Microbiology (IMB) of the German Federal Armed Forces in Munich, said: “Five of the seven ticks we can determine beyond doubt, four are the species Hyalomma marginatum and one of the kind Hyalomma rufipes.

“We did not expect ticks here in Germany at this time.”

Dr Gerhard Dobler, physician and microbiologist at the IMB, added: “In one of the specimens found, we were able to prove the pathogen of a tropical form of tick typhus.”

For another read on this monster tick in Germany:  https://www.dw.com/en/scientists-find-dangerous-tropical-ticks-in-germany/a-45086012  There is a video in the article that cites Lyme is easily cured with a couple weeks of antibiotics, yet treatment failures have been noted since the beginning of time.

They admit that they don’t even know what pathogens are transmitted in Germany, and that new ticks are cropping up there.

Please know that independent tick researcher John Scott has shown climate change has nothing to do with tick expansion or the spread of Lyme/MSIDS:   https://madisonarealymesupportgroup.com/2018/08/13/study-shows-lyme-not-propelled-by-climate-change/

Scott shows that migratory birds are serving as transits carrying infected ticks all over the world, even in places where there aren’t any white-footed mice. He also shows numerous fallacies with the climate models – particularly the fact they don’t include important data.  In the end ticks are marvelous ecoadaptors and research has they can survive the harshest of conditions.  What does affect them is lack of light (photo period).

https://www.cdc.gov/vhf/crimean-congo/index.html Crimean-Congo Hemorrhagic Fever (CCHF) can be transmitted to humans through infected ticks, animal blood, and infected human blood and/or bodily fluids (so human to human). CCHF has also been spread in hospitals due to improper sterilization.  Fatality rate in hospitalized patients has ranged from 9-50%.  Being a virus, care is supportive; however, it is sensitive in vitro to ribavirin, an anti-viral drug.  Recovery is slow.

Please note the last quote of the story – that they proved a tropical form of tick typhus in one of tropical ticks found in Germany. Typhus, a bacteria, is making a comeback, particularly in the South. Common in the U.S. in the 40’s, and normally attributed to lice, now it’s been proven to be in a tick. In other words, another disease and a tick found where they supposedly shouldn’t be.

Divided into the typhus group and the spotted fever group, disease is transmitted through ectoparasites (fleas, lice, mites, and ticks). Inhalation and inoculating conjunctiva with infectious material can also cause disease.  The good news for most is that doxycycline is a front-line drug for it.  Broad-spectrum antibiotics aren’t helpful.

The NY Times & the Question of a Lyme Vaccine

First Identification in China of Guertu Virus From Ticks