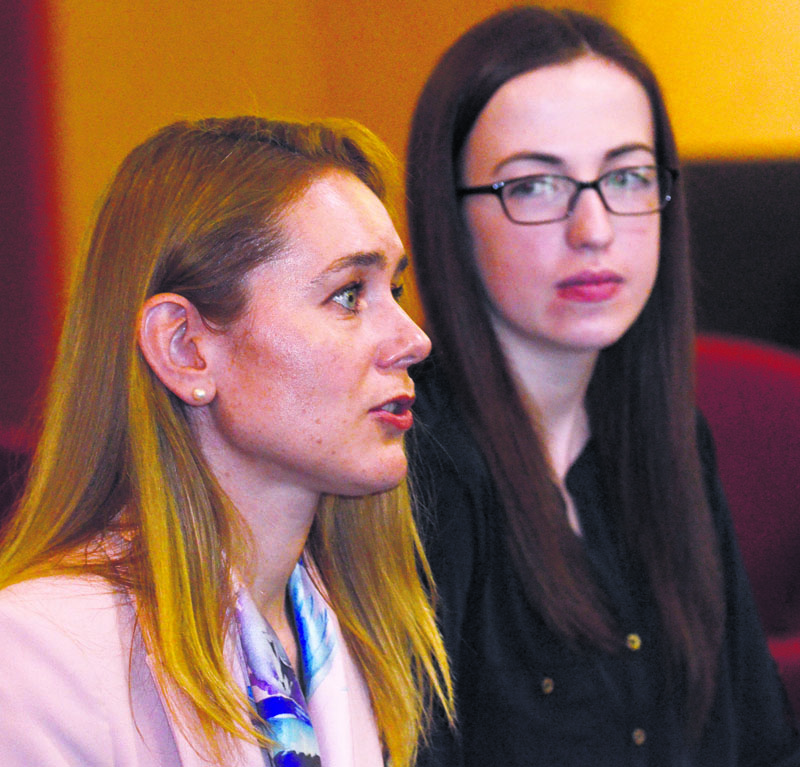 NILES — The ticks are coming — they’re already here — and residents and doctors alike must do a better job with care and treatment.

That was the warning and advice from Dr. Elena Frid, a neurologist and clinical neurophysiologist from New York, who stayed at the Residence Inn by Marriott earlier this month before speaking at the Northeast Ohio Lyme Disease Symposium in Andover.

“Lyme is easy to catch, difficult to diagnose and difficult to treat,” said Frid, who specializes in infections-induced autoimmune disorders. “An average patient with Lyme disease sees 10 doctors over a course of two years before receiving a diagnosis.”

The infection caused by bacteria transmitted by bites from infected deer ticks can cause chronic pain and neurological disorders. It is the fastest-growing vector-borne illness in the United States and across the world, Frid said.

Megan Tilton, 22, of Cherry Valley sat in a wheelchair beside Frid in the Residence Inn lobby.

“The ticks this year are bountiful,” Tilton said. “Literally anybody who goes outside is at risk. They’re in your backyard.

“People really need to understand how serious this is. People get a tick bite, shake it off and think that’s it. If someone had told us 10 years ago, if the doctor had tested for it, I wouldn’t have this chronic illness,” she said. “In most cases, if you treat it right away, you usually get better.”

Tilton was bitten by a tick in 2005 when she was 9 but not diagnosed with Lyme disease until 2012. In the meantime, she suffered headaches, joint pain, fevers and heart dysrhythmia, among other problems. Eventually, her legs quit working. But tests kept turning up negative and some doctors suggested she was making it all up for attention.

Now a senior at Malone University, Tilton is studying clinical laboratory sciences so that she can go into research of tick-borne diseases. She wants to help make sure what happened to her doesn’t happen to anyone else.

After the diagnosis, Tilton’s mother, Connie Moschell, a labor and delivery nurse at St. Joseph Warren Hospital, helped found the NE Ohio Lyme Foundation, a nonprofit organization that raises money for awareness and puts on the annual symposium.

“Our mission is to get money and get local doctors to go through training,” Moschell said. “If you tried to use that money to help patients, you’d run out real quick.”

Frid said, “If you teach one doctor, you treat the whole community. Then patients are not as disabled or impaired because the disease is caught earlier.

“One of the things when I speak is that really to raise money to have local physicians be educated on Lyme disease by attending international conferences to learn more they can serve the community,” she said. “This disease is very underrepresented in its funding. Because of that, our testing for it is poor.”

Research is limited for lack of government funding, she said. Doctors find themselves using information from the 1970s when the Centers for Disease Control and Prevention identified Lyme disease.

When first discovered, Lyme had been centered mostly southern and eastern coastal states. Then it started moving north and west. Lyme disease has become more and more prevalent in Pennsylvania and West Virginia, the two states that border eastern Ohio, and more cases continue to migrate into Ohio, according to the Centers for Disease Control and Prevention.

Randee Shoenberger, epidemiologist for the Trumbull County Combined Health District, said six probable or confirmed Lyme cases were recorded in both 2017 and 2018 in Trumbull County. The true numbers are uncertain for a number of factors, she said.

Because Lyme often isn’t diagnosed right away and bites often go unnoticed, it’s frequently uncertain where the patient was when bitten by a tick. The health department investigates cases in hopes of pinpointing where it happened.

Also, doctors may give medications to treat the symptoms, which clear up, and the case is never reported to the health department. Other times, victims of tick bites don’t seek treatment.

It just becomes hard to know for sure.

“We’re predicting that it could be a lot. You never know,” Shoenberger said.

The CDC’s database records 31 confirmed cases of Lyme disease in Trumbull County over the 17 years from 2000 to 2016. The greatest number was six in 2004. The least was zero in 2012 and 2016. East Stroudsburg, Pa.-based laboratory TickCheck, which tests for Lyme and tick-borne diseases, estimates that the actual numbers are 10 times greater than cases confirmed by the CDC.

Symptoms of Lyme disease include headaches, fever, fatigue and joint aches, and to a lesser degree, a minor rash, Frid said.

“Just because there’s no bull’s-eye rash (from a tick bite) doesn’t mean you don’t have Lyme. Fifty percent of patients don’t realize they have a bite, so often it’s missed.”

In most cases, symptoms tend to resolve on their own. But if the immune system is not strong enough to fight it off, then it can progress to chronic fatigue, neuropathy, chronic pain, even muscular dystrophy-like symptoms.

Frid recommends that people ask their doctors how comfortable they are at treating Lyme and how many patients per year they see with Lyme.

“We know the test is inaccurate,” she said. “(Asking questions about doctor comfort levels) will help them ID a specialist who is seeing and testing Lyme patients.”

Asking a doctor if they are comfortable treating Lyme and how many patients they treat might be a way to sift out those who aren’t going to treat this properly, but a much better way is to contact your local Lyme support groups. They have in hand a doctor list that contains doctors that are specially trained by ILADS (International Lyme & Associated Diseases Society).

Everyone now admits the 2-tiered blood serology testing is abysmal.

Everyone now admits that catching this early with early treatment is imperative.

What isn’t admitted is that the “wait and see” approach has been killing patients. By the time they “wait and see” if patients develop symptoms, the bacteria has moved past the blood/brain barrier and has burrowed deep within the body, making it much harder and longer to treat.

Einstein stated, “Insanity is doing the same thing over and over and expecting different results.”

Well, docs have been telling patients to “wait and see,” and the results of that experiment have been horrific. Time for a new approach.

Each and every tick bite should be taken as seriously as a heart attack. Do not mess around with this.  In my opinion, each tick bite should be treated prophylactically. A $30 bottle of antibiotics beats $50-200K out of pocket every time in my book, not to mention the avoided pain and suffering.

Comments Off on New York Doctor Warns of Tick-borne Diseases

Babesiosis in Pregnancy: An Imitator of HELLP Syndrome