US Warship Quarantined at Sea Due to Virus Outbreak

US warship quarantined at sea due to virus outbreak 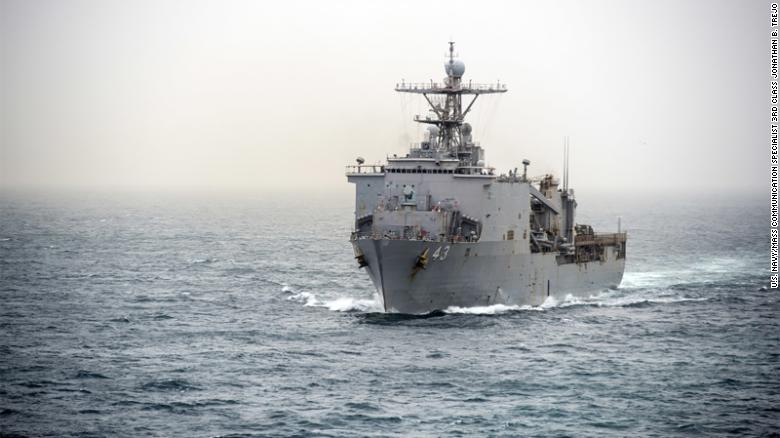 (CNN)A US warship has essentially been quarantined at sea for over two months and has been unable to make a port call due to an outbreak of a viral infection similar to mumps.

Twenty-five sailors and Marines aboard the USS Fort McHenry amphibious warship have been diagnosed with parotitis, which causes symptoms similar to mumps, according to US military officials.
Until CNN asked about the incident, the US military had not disclosed it. The illness first broke out in December, with the most recent case being reported on March 9.

“None of the cases are life-threatening and all have either already made or are expected to make a full recovery,” the Fifth Fleet said in a statement provided to CNN.

All seven hundred and three military personnel aboard the ship have received measles, mumps and rubella (MMR) booster vaccinations, according to the US Navy’s Fifth Fleet headquartered in Bahrain.

The ship is currently operating in the Persian Gulf region and military medical officials are assessing when it may be deemed medically safe to make a port call.
A US military official tells CNN that when there are major disease outbreaks, a decision may be taken to halt port visits until 30 days after the last reported illness due to varying incubation periods.
But the Fort McHenry did make a port call in early January in Romania when it was in the Black Sea before traveling back through the Mediterranean and into the Middle East.
The ship includes elements of the 22nd Marine Expeditionary Unit. Since the initial case was detected on December 22, 24 of the 25 patients have returned to duty.
After they became ill, the patients were quarantined and treated in the ship’s medical facility. Living and work spaces were disinfected.
None of the personnel had to be medevaced off the ship and all are expected to make a full recovery.
However, a military medical team specializing in preventative medical care is expected to deploy in the coming days to make an assessment if further steps may be needed, according to the official.
The ship, which carries Marines to perform amphibious warfare duties did have some of its scheduled training modified to deal with the outbreak’s impact.
___________________
**Comment**
With 100% vaccination rate, they still got ill.  Do the math.
Former Merck scientists sued Merck Alleging MMR Vaccine Efficacy Fraud back in 2010.  These whistleblowers were threatened with jail if they alerted the FDA that they were forced to add rabbit antibodies to human samples to increase efficacy of Merck’s mumps vaccine (which is currently only available in the combination MMR vaccine and conveniently the ONLY manufacturer licensed by the FDA to sell it in the U.S.). This addition increased pre-vaccine blood from 10% positive to 80% positive:  https://ahrp.org/former-merck-scientists-sue-merck-alleging-mmr-vaccine-efficacy-fraud/
Mainstream media failed to report that in 2014 a judge ruled in favor of the whistleblowers.

When The Wall Street Journal did cover it in 2012, it was removed 3 days later.

One of the lead authors on a CDC published study in 2004 has also become a whistleblower, stating that the CDC withheld data from the public linking the MMR vaccine to a higher rate of autism among some children, specifically African American boys.  http://healthimpactnews.com/2014/judge-lawsuit-against-mercks-mmr-vaccine-fraud-to-continue/

A federal judge has ruled the case will proceed despite the media not touching this with a 10 foot pole.

Our military is in harm’s way and I’m not talking about bullets. They are required to receive a number of vaccines, yet the U.S. military does not track any vaccine-related side effects or injuries despite the fact that concerns over vaccine-related injuries led to the creation of the U.S. Department of Defense (DOD) Vaccine Healthcare Centers (VHC) Network in September 2001.1,2  https://articles.mercola.com/sites/articles/archive/2017/06/27/vaccine-injuries-veterans-denied-benefits.aspx
Also, I highlight a vaccine docu-series that discusses the anthrax vaccine on the military:  https://madisonarealymesupportgroup.com/2017/03/25/vaccines-revealed-6-please-share-with-all-military-members/  In the only public study ever done, 30% of all vaccinated members of the military suffer some chronic illness they claim is due to the Anthrax Vaccine. These symptoms have become known as Gulf War Syndrome.

For a good read on the quarantined ship:  https://thevaccinereaction.org/2019/03/mumps-like-parotitis-strikes-crew-of-u-s-navy-ship/  Key Quote:  “Parotitis is noted as a possible ‘adverse event’ following MMR vaccination by the World Health Organization. ‘Parotitis typically occurs 10–14 days after vaccination,’ states the WHO.9 According to the Navy’s Fifth Fleet headquarters in Bahrain, the entire crew of the ship was given MMR booster vaccinations.1″

Parotitis Is the Most Frequent Adverse Reaction Following MMR Vaccine

Circling back to the possibility that the military parotitis outbreak may actually be an outbreak of adverse reactions to the MMR vaccine, a 2011 study found parotitis to be a frequent adverse event reported following MMR vaccine and occurred in nearly 2 percent of recipients.28 Meanwhile, mumps itself is often not serious, with the vast majority of people recovering completely within two weeks without complications.

According to the CDC, some people who get mumps have only mild, cold-like symptoms or have no symptoms at all and may not even know they have the disease.29 Clearly there is far more that needs to be understood about mumps infection, parotitis and the MMR vaccine before a third dose becomes a routine recommendation.

Food Allergies Got You Down? Your Essential Guide to Allergy-Friendly Alternatives

First Report of Cat-Scratch Disease Associated With B. clarridgeiae