The U.S. Department of Health and Human Services and Centers for Disease Control and Prevention will provide $1 million in grant funding to develop “a “public health tool” to predict vaccine “misinformation trends.” 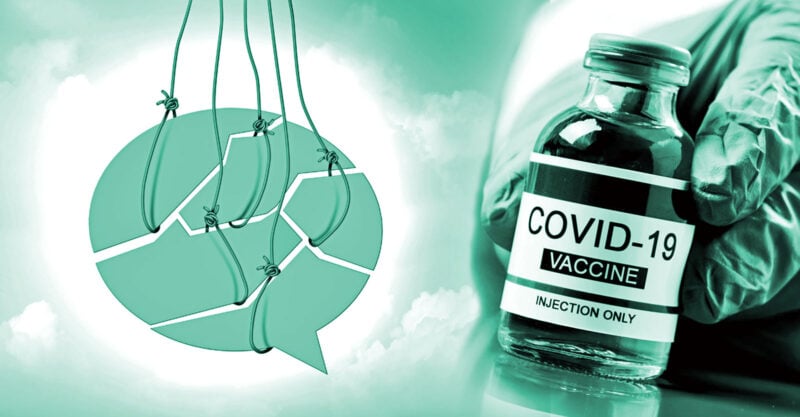 According to the grants.gov website, the U.S. Department of Health and Human Services (HHS) and Centers for Disease Control and Prevention (CDC) will accept grant applications until Jan. 6, 2023 for research:

“ … to develop a predictive forecasting model that identifies new or reemerging misinformation narratives that are likely to disseminate widely and have a high potential for impact on vaccine confidence.

“The information from this model will then be used to develop a tool that public health agencies could use to predict misinformation trends in the populations served. Finally, the researchers will evaluate the tool’s predictive capabilities on both future social media misinformation narratives and real-world events.”

A single applicant will receive an award ranging from $400,000 to $500,000 to develop “a forecasting model that aims to identify potential misinformation on vaccines and how it will affect people as it spreads on social media,” according to Fox News.

Public and private actors — including public institutions of higher education, state, city and county governments, independent school districts and nonprofit organizations — are eligible to apply for the funding.

The final grantee will be selected at a March 7, 2023 meeting that will be closed to the public, according to the Federal Register notice, which states:

“The grant applications and the discussions could disclose confidential trade secrets or commercial property such as patentable material, and personal information concerning individuals associated with the grant applications, the disclosure of which would constitute a clearly unwarranted invasion of personal privacy.”

Government should not be ‘policing thought crimes’

The new grant opportunity captured the attention of media outlets, lawmakers and analysts.

“The grant runs through the Centers for Disease Control and Prevention, which has a history of efforts to combat misinformation,” Fox News reported. “Internal documents obtained by American First Legal in July revealed how the CDC coordinated with Facebook, Twitter and Google to counter online content it deemed to be misinformation.”

Hopefully this article makes it abundantly clear that our public health “authorities” and most of our government agencies are either complicit or actively involved in this unprecedented attack on free speech.

The CDC used a backchannel with Twitter to control the COVID narrative.

Twitter set up a portal for government officials and “stakeholders” to rat out posts that allegedly contained COVID “misinformation,” and millions of Americans have witnessed the censorship under the guise of ‘misinformation.’  Beneath each layer of shocking details reveals a partnership between the federal government and Big Tech and another layer of connections, conspiracy, and collaboration between power centers.

CDC specifically sent Facebook and Twitter-specific posts to take down, throttle, censor, or flag,” and linked the CDC’s guidelines on in-school mask mandates to “political polling by liberal dark money group The Kaiser Family Foundation (KFF).”  KFF has received funding from Google and Twitter, and its officials have served in both the Biden and Obama administrations.

Giving our tax dollars away in the form of “grants” to those who will forecast how to take down voices of dissent is the final kick in the pants.  Unbelievable…..if we hadn’t lived the past two years to see where all of this is going.

Fathom for a moment what $1 million could do in the hands of independent researchers (who don’t have to regurgitate the accepted narrative to obtain corrupt government grant money) committed to creating accurate Lyme/MSIDS diagnostics, treatments, and transmission studies.  This, right here should prove that public health is NOT about public health and your life means nothing to these agencies.

The draft treaty contains various provisions in Article 16 (“Strengthening pandemic and public health literacy”) that require the WHO’s 194 member states (which represent 98% of all the countries in the world) to target so-called misinformation.

Member states are told to “conduct regular social media analysis to identify and understand misinformation,” design their own messaging to “counteract misinformation, disinformation and false news,” and manage “infodemics” (a phrase that was created by the WHO and describes “too much information including false or misleading information in digital and physical environments during a disease outbreak”).

Under the pandemic treaty, the ties between governments and pro-censorship Big Tech companies will become even stronger and collaboration will be required.

The World Health Organization runs on a two-year budget cycle. For 2020 and 2021, its budget for carrying out its programs is $4.8 billion, or $2.4 billion per year.

The U.S. is the largest single government donor in the world.

For the two-year budget cycle of 2018 and 2019, the U.S. government pledged to contribute $893 million to WHO’s budget – consisting of “assessed contributions” (dues paid by member countries) and voluntary contributions.  Source

A copy of the draft international pandemic treaty is found here.

A copy of the INB’s current proposed timeline is found here.

If passed, the international pandemic treaty will be adopted under Article 19 of the WHO Constitution. This article gives the WHA the power to impose legally binding conventions or agreements on WHO member states if two-thirds of the WHA vote in favor of them.

This of course bypasses the usual process of elected officials voting on laws and allows a handful of globalists to impose rules on other countries without proper representation.

The international pandemic treaty is on track to being finalized by May 2024and the WHO has shown no intention of abandoning its far-reaching power grab.

The article points out that one of the most infamous producers of COVID ‘misinformation’ is the corrupt WHO.

Comments Off on CDC, HHS Offer $1 Million for Research to Predict Vaccine ‘Misinformation Trends’ & WHO Plots to Censor Under International Pandemic Treaty