The True Cost of Lyme Treatment

The True Cost of Lyme Treatment 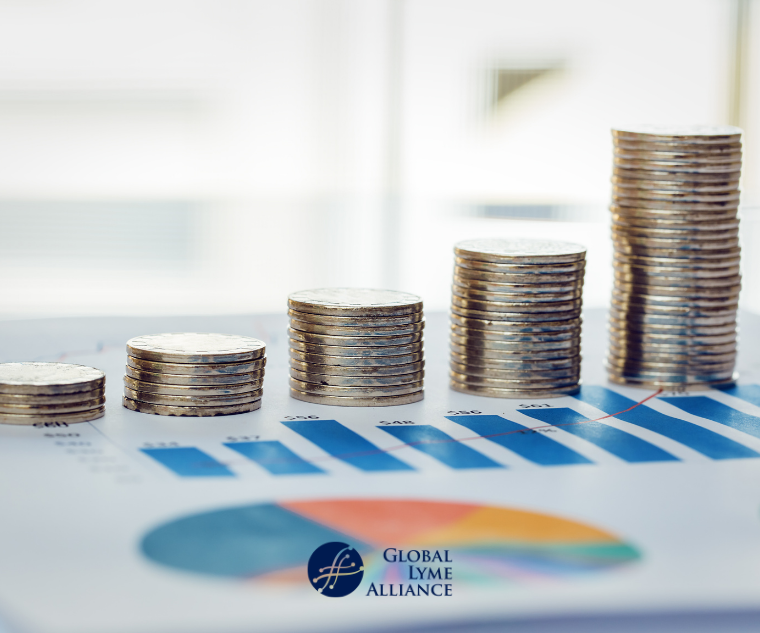 Patients with Lyme disease not only suffer from debilitating symptoms, but also have to pay enormous amounts in medical bills. This blog discusses the financial impact of having Lyme on individuals and their families.

Lyme disease can take an incredible toll on patients and families. Beyond feeling physically sick—wrestling with symptoms ranging from fatigue, to joint pain, to neurological manifestations—there are emotional, psychological, and financial costs that come with a diagnosis of Lyme. If the patient is lucky enough to get treated right away for early localized Lyme disease, these effects may only impact them for a few short weeks.

But for many Lyme disease patients, the story is not as simple. Roughly 40% aren’t diagnosed until a later stage of the disease [i], and 10-20% of those who are diagnosed early go on to experience persistent symptoms. Many of these people also have other tick-borne diseases, so the road to the recovery is long and circuitous. In these cases, patients can suffer for years, and the financial impact can be severe.

Research by the Johns Hopkins University Bloomberg School of Public Health found that Lyme disease costs the U.S. health care system between $712 million and $1.3 billion a year [I]. Despite these staggering numbers, some Lyme disease patients find themselves shelling out their life savings to cover medical costs. Part of the problem is that long term antibiotic treatment is often not covered by insurance (for more information on this issue, please see “Why Isn’t My Lyme Disease Treatment Covered by Insurance?”). Because of this quagmire, many Lyme Literate Medical Doctors (LLMDs) don’t take insurance, so patients need to pay out-of-pocket and hope for some level of reimbursement. Then there’s the cost of adjunct therapies, supplements, and alternative treatments, most of which are also not covered by insurance. A recent Business Insider article tells the story of one Lyme disease patient who paid $100,000 out-of-pocket over a three-year period. Unfortunately, her plight is all too common.

These costs can be especially difficult to cover when patients are too sick to work. In a 2015 lymedisease.org study of more than 6,000 chronic Lyme disease patients, 42% reported having to quit or cut back on work. Less than half of that number reported receiving disability at some point. Losing the ability to provide for oneself or one’s family—and in many cases having to depend on family or friends while sick—can be a real blow to a patient’s sense of self-worth. Moreover, loss of finances can negatively affect relationships. “Active and upbeat people lose the capacity to perform their jobs; athletes lose their ability to play sports for recreation or profession; the emotional turmoil within family life roils to the point of divorce or separation as the Lyme victim—and in many families, more than one person is afflicted—stresses the climate of the household with constant symptoms, financial demands, and psychological changes that boomerang throughout both immediate family and extended relationships,” [iv] write Denise Lang and Kenneth Leigner, M.D. in their book Coping With Lyme Disease: A Practical Guide to Dealing with Diagnosis and Treatment.

In spite of the bleak reality of the costs of Lyme disease, there are resources available to help alleviate the burden. Many foundations offer financial assistance for people with Lyme disease. For example, the Lymelight Foundation provides grants for treatment and medication for people up to 25 years of age, while Ride Out Lyme and Ticked Off Foundation provide grants for adults ages 26 and older. And those are just a few of the many resources available; check out GLA’s detailed list. Lyme is expensive, but help is available!

Digging back a number of years, I estimated we were spending approximately $15K per person per year for Lyme/MSIDS treatment. I’m sure it’s increased by now. We only tested once so saved money on testing.  We also utilized mainly antibiotics which are fairly inexpensive as a rule.  I also planned ahead and used Canadian pharmacies which are much cheaper for the more expensive drugs.  You need to allot about a month when you do this as the drugs often come from India and take longer to get.  Herbal treatments (which we’ve also used) are approximately $280-$300 per month unless you buy the ground herbs in bulk and either swig them down or make your own capsules.  So “natural” options aren’t cheaper.  We also used IV blood ozone ($100-$170 per time) and required many supplements (and still do).

Besides the staggering financial cost to this 21st century plague, this paper, based on estimates of treatment failure rates associated with early and late Lyme, estimates that 35-50% of those who contract Lyme will develop persistent or chronic disease.

Let that sink in.

And in the Hopkins study found 63% developed late/chronic Lyme symptoms.

For some time I’ve been rankled by the repeated CDC statement that only 10-20% of patents go on to develop chronic symptoms.  This mantra in turn is then repeated by everyone else.

While still an estimate, I’d say 35 to over 60% is a tad higher than 10-20%, wouldn’t you?  It also better reflects the patient group I deal with on a daily basis.  I can tell you this – it’s a far greater number than imagined and is only going to worsen.

Time for every number on the CDC website to be adjusted.

Comments Off on The True Cost of Lyme Treatment

Patients Having “Viral Rebound” After Paxlovid, Which Failed to Show Improvement Over Placebo For Prophylaxis