More reported military DEATH from COVID shots than from COVID. 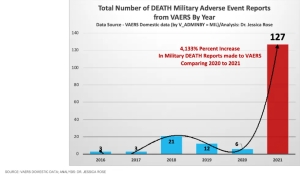 HIV protein added to shots to disable autoimmunity (disarm your immune system) so lipid nanoparticles can get through your cellular defense.  Those getting COVID shots are testing positive for HIV and those getting three shots have destroyed their immune systems.

Despite documented adverse reactions, deaths, and heart inflammation, COVID jabs are now mandated for the military as of Sept. 15, despite being experimental, fast-tracked injections approved under mysterious circumstances. Soldiers with natural immunity are now fighting back by filing a lawsuit against the Pentagon, the DOD, FDA, and HHS. Also, America’s Frontline Doctors have filed a Temporary Restraining Order (TRO) against mandating these dangerous injections for military members with existing immunity.  The military in fact has existing laws and regulations providing exemption from vaccination for those with natural immunity, however commanders have already told servicemen and women that religious, medical, and serological exemptions will be denied.

And yet, they are now mandated to get injections that have caused more injuries and death than all injuries and death combined in a 30 year history of VAERS, which is known to only capture about 1% of adverse events.  According to a doctor who served 9 years as a Navy physician and surgeon and who also studied bioweapons:

… the “vaccine” program has ostensibly killed more of our young active duty people than COVID did.  Dr. Lee Merritt

In a study published June 29 in JAMA Cardiology, researchers described 23 cases of myocarditis in healthy military members who developed the condition within four days of receiving the Pfizer or Moderna COVID vaccines.

A new study of U.S. service members found higher than expected rates of heart inflammation following receipt of a COVID vaccine. It’s a finding Defense Department researchers say should call attention to the condition, known as myocarditis, as a potential side effect of vaccinations.

In a study published June 29 in JAMA Cardiology, U.S. military physicians described 23 cases of myocarditis in previously healthy males who developed the condition within four days of receiving a COVID vaccine.

A total of 23 male patients (22 currently serving in the military and 1 retiree) with a median age range of 25 years were evaluated between January and April 2021 for acute-onset chest pain following vaccination with an mRNA COVID vaccine.

All military members were previously healthy with a high level of fitness. They were physically fit by military standards and lacked any known history of cardiac disease, significant cardiac risk factors or exposure to cardiotoxic agents.

All patients presented with acute chest pain and significantly elevated cardiac troponin levels (10-fold to 400-fold the upper limits of their respective reference ranges) with symptom onset within 12 to 96 hours following COVID vaccination.CHD Calls on FDA to Take COVID Vaccines Off the Market – Submit a Comment

Cardiac symptoms resolved within a week of onset for 16 patients, but seven continued to have chest pain at the time of publication.

The researchers stated that while the true incidence of myocarditis is unknown at this time, the presentation pattern and clinical course suggest an association with an inflammatory response to vaccination.

The team concluded that increased attention to myocarditis as a potential adverse event following vaccination is warranted.

All four patients had received the second dose of an mRNA vaccine and presented with severe chest pain, had biomarker evidence of myocardial injury, were hospitalized and had test results consistent with myocarditis.

An association between COVID vaccines and myocarditis was first reported in Israel with a case study in February involving a 19-year-old male.

On April 26, details leaked from an Israeli Health Ministry report raising concerns among experts about a possible link between the Pfizer-BioNTech COVID vaccine and myocarditis.

A preliminary report by an Israeli committee tasked with monitoring vaccine side effects found 62 cases of myocarditis, including two deaths, in people who received the Pfizer vaccine. Fifty-six cases occurred after the second dose of the vaccine, and 55 cases occurred in men — most between the ages of 18 and 30.

The two patients who died were reportedly healthy until receiving the vaccine and had no pre-existing conditions.

On April 27, Reuters reported the U.S. Department of Defense was investigating 14 cases of heart inflammation among people who were vaccinated through the military’s health services.

On June 2, Israeli health officials confirmed a probable link between the Pfizer’s COVID vaccine and dozens of cases of heart inflammation in young men following the second dose.

As The Defender reported June 10, the CDC’s advisory committee acknowledged a higher-than-expected number of cases of heart inflammation among 16- to 24-year-olds who recently received a second dose of the Pfizer and Moderna COVID vaccines.

Based on a May 24 report from the CDC’s Advisory Committee on Immunization Practices (ACIP) COVID-19 Vaccine Safety Technical Work Group (VaST), the CDC on June 1 updated its website with the following language:

“Data from VAERS [Vaccine Adverse Events Reporting System] show that in the 30-day window following dose 2 mRNA COVID-19 vaccination, there was a higher number of observed than expected myocarditis/pericarditis cases in 16–24-year-olds.”

On June 23, the ACIP said there was a “likely association” of “mild” heart inflammation in adolescents and young adults after vaccination with an mRNA COVID vaccine and a warning statement was warranted.

The safety panel acknowledged more than 1,200 cases of myocarditis or pericarditis in 16- to-24-year-olds who received an mRNA COVID vaccine, mostly occurring in males after the second dose.

As The Defender reported June 28, the U.S. Food and Drug Administration added a warning to Pfizer and Moderna’s fact sheets indicating an increased risk of myocarditis and pericarditis following vaccination.https://platform.twitter.com/embed/Tweet.html?dnt=false&embedId=twitter-widget-0&features=eyJ0ZndfZXhwZXJpbWVudHNfY29va2llX2V4cGlyYXRpb24iOnsiYnVja2V0IjoxMjA5NjAwLCJ2ZXJzaW9uIjpudWxsfSwidGZ3X2hvcml6b25fdHdlZXRfZW1iZWRfOTU1NSI6eyJidWNrZXQiOiJodGUiLCJ2ZXJzaW9uIjpudWxsfSwidGZ3X3R3ZWV0X2VtYmVkX2NsaWNrYWJpbGl0eV8xMjEwMiI6eyJidWNrZXQiOiJjb250cm9sIiwidmVyc2lvbiI6bnVsbH19&frame=false&hideCard=false&hideThread=false&id=1409604910971297795&lang=en&origin=https%3A%2F%2Fchildrenshealthdefense.org%2Fdefender%2Fheart-inflammation-linked-covid-pfizer-moderna-vaccines-u-s-military%2F&sessionId=585e2914ed5412234524c7067130bcbd183a1c9d&siteScreenName=ChildrensHD&theme=light&widgetsVersion=82e1070%3A1619632193066&width=550px

According to the latest data from VAERS, there were 1,342  cases of myocarditis and pericarditis (heart inflammation) in all age groups reported in the U.S. following COVID vaccination between Dec.14, 2020 and June 18, 2021.

Of the 1,342 cases reported, 835 cases were attributed to Pfizer, 458 cases to Moderna and 45 cases to Johnson & Johnson’s COVID vaccine.

Megan Redshaw is a freelance reporter for The Defender. She has a background in political science, a law degree and extensive training in natural health.

Comments Off on Heart Inflammation Linked to COVID Vaccines in Study of U.S. Military, Department of Defense Confirms

“Healing Can’t Happen in a Bubble of Fear”