The press release dealt with a group of Florida parents who sent cultures of their children’s (ages 6-11) masks, worn at school for 6-8 hours, to a lab. The masks were freshly laundered before they were worn for the day. One adult mask was submitted who works as a cosmetologist.  Also see this news report.

The Lab report using proteomics to extract proteins from the masks to sequence them revealed the following: 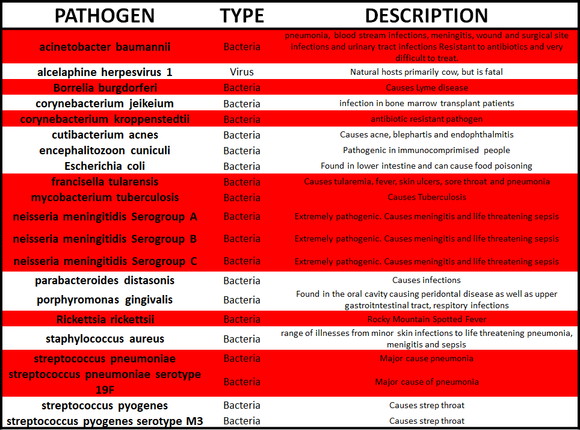 While this might be surprising to some, this website has posted on the dangers of mask usage from day one as well as the fact Fauci himself initially stated they weren’t effective, yet people are still wearing them!

The final nail in the coffin should have been after the Danish mask study  a randomized, controlled trial on thousands of people.  But it didn’t matter.  The spin doctors used their power to shout it down, and any other information showing the dangers and ineffectiveness of mask usage. Merely posting the study got me kicked off LinkedIn.  So much for a free exchange of ideas in the era of COVID.

While a Florida appeals court has already ruled that the mask mandate in Alachua County is presumptively unconstitutional because it violates bodily autonomy, the rest of the country is still in question. The Boston Globe is already advocating their use for the flu season.
For Lyme/MSIDS patients, this information should reinforce what we already know.  Ticks are not the sole perp transmitting “tick-borne illness,” and we need much more work done on this issue.
Lida Mattman, the expert on the cell wall deficient forms has stated she believes Lyme is transmitted by fomites, (an inanimate object or substance that is capable of transmitting infectious organisms from one individual to another). But the spin doctors shouting down anti-mask science have also shouted down any work on sexual and congenital transmission. When I asked Elizabeth Burgess if I could interview her, as she has done much work in the past on animal transmission at the University of Wisconsin, she refused – still affected by nearly losing her job and the bullying that occurred for her controversial findings decades ago.
Further, Mattman did groundbreaking work on Lyme testing. Her Gold Standard Culture Method has disappeared thanks to the concerted suppression on microscopy. In 2004 she already claimed that she could not find any uninfected blood in the USA anymore.

And now Lyme, Tularemia, and Rickettsia have ALL been found on the masks of children?

This should cause us all to pause and consider.

For more on guidelines harming children:  https://www.greenmedinfo.com/blog/how-covid-19-school-guidelines-are-harming-kids . It became clear early on that children and teens are at very low risk from COVID-19, with a 99.997% survival.

Comments Off on Lyme, Tularemia, Rickettsia, & Other Bacteria Found on Children’s Masks

Tick Season 2021: Why Researchers Are Focusing on Staten Island Backyards

The Red Ring: Live Q & A With Cast and Crew on Lyme Documentary