Prominent Medical Doctor Arrested in London Protests: “What Kind of a Country Have We Become?”

Prominent Medical Doctor Arrested in London Protests: “What Kind of a Country Have We Become?” 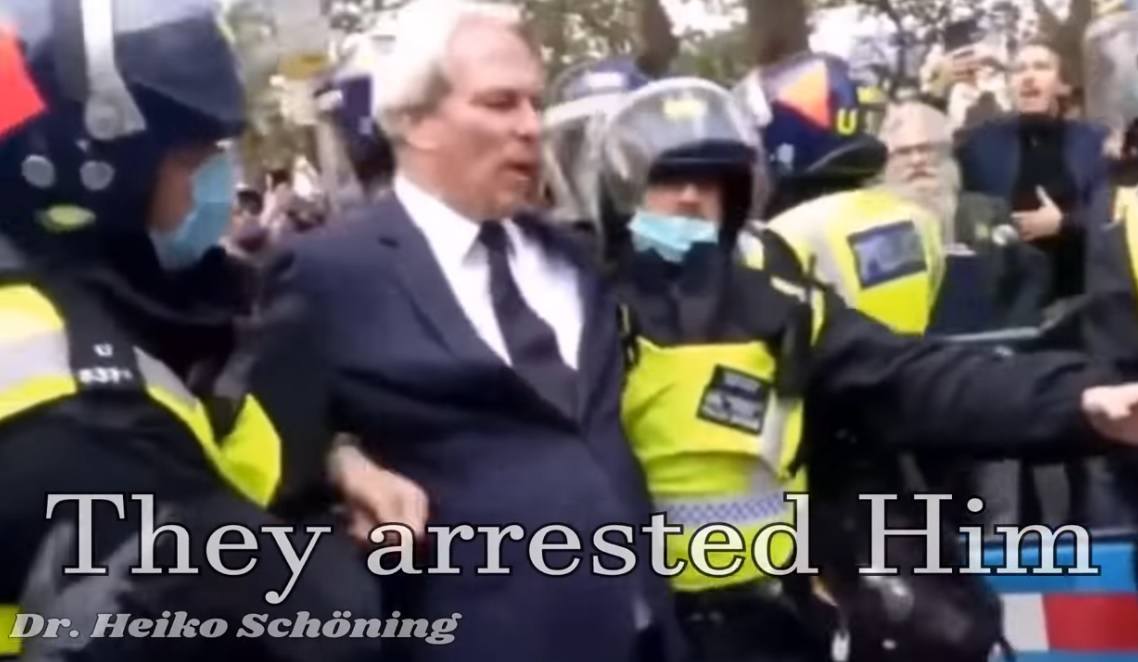 Protesters in Trafalgar Square, London were standing up for freedom of expression and human rights.

Heiko Schöning, MD a prominent German medical doctor who heads Doctors For Truth, an organization of more than a thousand doctors who oppose government fearmongering, was arrested in Trafalgar Square, London for speaking against draconian government measures. He noted that the people in Germany know, from their Nazi history where government restrictions on personal freedom and medical dictates lead.

In June, Facebook censored a video presentation by Dr. Schöning in which he stated that:

“the corona is just a type of flu that occurs at a certain time each year, and the strict measures that have been introduced, allegedly have nothing to do with the virus but only caused panic. The corona panic is a simple deception, mafia trick and crime.”

“We are witnessing the slow demise of one of the great conceits of the modern world: the notion that the big-hearted State can protect us against every misfortune and that human beings are mere tools of State policy to be pushed about like pawns on a chessboard according to the changing impulses of its ministers.

He identifies the reason that aggressive social distancing failed:

The measures which these countries have taken have varied in their severity, but not in their outcome. Our instincts and our culture are based on interconnections with other humans. The whole organisation of our lives, in cities, workplaces, schools and families depends on physical proximity.

With a few exceptions (such as those living in multi-generational households), they can shelter themselves if they wish. Many of them will prefer to take the risk. Those who have less time remaining to them may rationally prefer quality of life to quantity.

They may prefer to hug their grandchildren than to treat them as angels of death. Why should they not be allowed to make that choice for themselves, instead of having some distant minister make it for them?

Lord Sumption notes that in March the Scientific Advisory Group for Emergencies (SAGE) made three reasonable recommendations, but the government failed to follow these and instead issued arbitrary, irrational directives: lockdown, masks, and social distancing:

…we are told that they will lock us down if we not do the Government’s bidding and possibly even if we do. We are menaced with £10,000 fines at the discretion of any policeman in the land. We are advised to inform on our neighbours. In Scotland, students are ordered in strident tones not to go to pubs or socialise, and in England we are told that they might not be allowed home for Christmas.”

What kind of country have we become where arrogant bullying of this kind is regarded as a proper function of ministers?

We now learn that the Government expects current restrictions to last six months. Until what? Until the virus obligingly departs? Until there is an effective vaccine, whenever that may be? Until the next ill-considered idea for reordering our lives? What is the plan, now that the risk of overwhelming the NHS has subsided? Where is the exit route?

Read the full article: What kind of a country have we become when arrogant bullying is seen as the proper function of Ministers?

Another critique is by veteran journalist, Peter Hitchens, who compares the lockdown to burning the house down to get rid of a wasps’ nest.

The wasps, having more sense than him, flew off as soon as they felt the heat. But the house is gone. Now he stands by the smouldering ruins, blaming everyone but himself for this futile catastrophe. I suspect that some of the things he said on Tuesday night will bring him down, especially the outrageous threat to use troops. If we have been as well-behaved as he pretends to believe, how can such things be justified?

A large part of the crazy, unenforceable tangle of new regulations seemed to be based on the belief that Covid spreads only when you are standing up. Millions of eyes opened to the discovery some of us made long ago – that anti-social distancing rules are not based on serious research, but on random guesswork and a desire to frighten us all into doing anything they tell us…

The words ‘We must learn to live without fear’ demand a complete U-turn from a Cabinet that has distilled power out of fear for six disastrous months – and used that power to smash up the wealth of centuries.

Has there ever before been in this country a government that destroyed so many livelihoods on purpose? People wrongly think the phrase ‘herd immunity’ sounds cruel (It is not. It has been used for decades, by vaccination experts.

Comments Off on Prominent Medical Doctor Arrested in London Protests: “What Kind of a Country Have We Become?”