“Shapiro and Walker Operated As a Tag Team Throughout the Meeting”

“Shapiro and Walker operated as a tag team throughout the meeting” 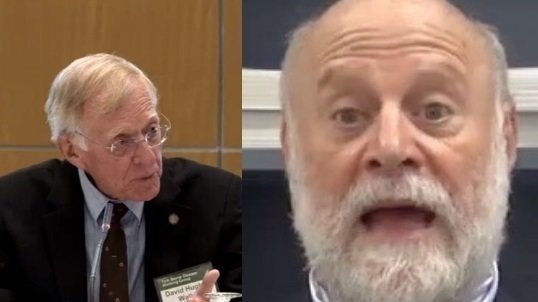 Today’s letter to the Tick-Borne Disease Working Group. Why not send your own email requesting the removal of Shapiro?

From: CARL TUTTLE <runagain@comcast.net>
To: tickbornedisease@hhs.gov
Cc: (99 Undisclosed recipients)
Date: 07/12/2020 9:45 AM
Subject: “Shapiro and Walker operated as a tag team throughout the meeting”

“I’m dumbfounded why you would not want to try to understand the mechanisms of persistent Lyme. We know this happens with other infections”

To the Tick-Borne Disease Working Group,

One of the strategies of the racketeering scheme (Lisa Torrey vs IDSA) was to suppress evidence of persistent infection after extensive antibiotic treatment and then claim there is no evidence. The deliberate and well-orchestrated denial has left hundreds of thousands if not millions worldwide in a debilitated state.

Let me remind everyone on this panel that the maximum penalty authorized for a RICO violation is 20 years in jail but being investigated for a serious crime did not disqualify Eugene Shapiro from appointment to the group.

-Would we have appointed film producer Harvey Weinstein to the TBDWG while he was under investigation?

-How about Jeffrey Epstein or Bill Cosby while they were being investigated for a serious crime?

Whoever appointed Shapiro (to control the narrative) should be investigated for aiding and abetting.

Let’s all review what is known about Dr. Eugene Shapiro……………

Memorable and Not So Memorable Quotes by Lyme Disease Denialists

“Lyme disease prevention requires only minimal precautions; even for people living in areas with the highest  concentration of positively identified cases”:

“Over time, the [Lyme] disease tends to burn itself out, even without treatment, in many people”:

“Children with only non-specific symptoms, such as headache, fatigue, or arthralgia, are very unlikely to have Lyme disease. Serologic tests for Lyme disease should not be ordered for such patients because a positive test result is very likely to be a false-positive”:

“Nearly 90% of children who develop Lyme disease have either single or multiple sites of erythema migrans”:

“There is no evidence that congenital Lyme disease is a problem”:

“The prognosis of children with Lyme disease, both early and late, is excellent, with no evidence of chronic symptoms or long- term sequelae”:

“Because of the low risk of Lyme disease and the excellent prognosis of children who do develop Lyme disease,  prophylactic antimicrobial treatment is not recommended for children who are bitten by a deer tick”:

“In patients presenting with nonspecific symptoms, the positive predictive value of serologic testing for Lyme disease is low”:

“There are a ton of people with non-specific symptoms and most of their positives are false positives [for the ELISA and Western Blot], so they think they have this diagnosis of Lyme”:

-Eugene Shapiro, MD, quoted by Stefanie Ramp in the Fairfield County Weekly, May 20, 1999

“If all you know is that you found a deer tick on your child, the risk is 1 to 2 percent at most of having Lyme disease.  And then greater than 90 percent of those will show a rash at the site of the bite.”:

“Most ticks are not infected and even if a child has been bitten by an infected tick, 36 to 48 hours are needed before transmission of the bacteria takes place.”:

“There are probably better ways to spend health-care dollars” than on a vaccine for Lyme disease:

-Eugene Shapiro, MD, a professor of pediatrics at Yale, quoted by Stefanie Ramp in the Fairfield Co. Weekly on May 20, 1999

“If you only go to a Lyme literate doctor, you are likely to be diagnosed with Lyme disease, because that’s what they do. If you go to Midas, you’re going to get a muffler.” (Chronic Lyme sufferers believe that the medical world would benefit immensely from Shapiro having a Midas muffler installed on his person).

“So, you know, in an anecdotal sense, taking antibiotics and feeling better doesn’t mean that the antibiotics are the reason that you felt better. It may have something to do with the belief that this doctor cares for me, I’m doing something to help myself, it’s very complicated and we don’t know all the answers…”(Shapiro’s rambling and inane commentary was rightfully terminated by the host of the program).

WHY IS SHAPIRO ON THE TBDWG????

Please call for his immediate removal.

Perhaps Shapiro is somehow related to Bill Gates?  They both seem to have extraordinary power over thousands if not millions of people’s health.

BTW: Shapiro urges the medical community to develop ways to prevent “healthcare-seeking behaviors” by parents who believed their children may have Lyme disease:

“…it’s very clear that simply telling parents that Lyme disease is not the cause of these nonspecific symptoms such as fatigue, various pain syndromes that is not sufficient and that we need a new paradigm to how to best manage such patients. Often it’s not the pediatric infectious disease specialists who doesn’t have an ongoing relationship with his patients who is likely the best but someone who can develop a trusting relationship with them. Very frequently these parents are seeking affirmation that these symptoms are real and in fact they are real it’s just that they’re not caused by Lyme disease…..” Eugene Shapiro

Pre-Existing Immunity to SARS-CoV-2: The Knowns and Unknowns