Zoonotic Diseases & Why We Are So Interested in Bats (Bartonella, Mycoplasma, & Coronavirus)

The World Health Organization (WHO) estimates that 75% of new human diseases discovered in the last decade are caused by zoonotic pathogens. The bat is a host that is uniquely perfect to evolve pathogens that are dangerous to people. One Health is an outlook that brings animal health, human health and environmental experts together to better prepare for and respond to zoonotic diseases. In this post we discuss three groups of pathogens linked to bats: coronavirus, Bartonella species, and hemotropic mycoplasma.

One health scientists scour the earth looking for emerging pathogens that might impact people. If pathogens can be located early, transmission routes can be disrupted and diseases can be prevented. If disease outbreaks can’t be prevented, early research can give a head start on understanding effective treatments and containment. 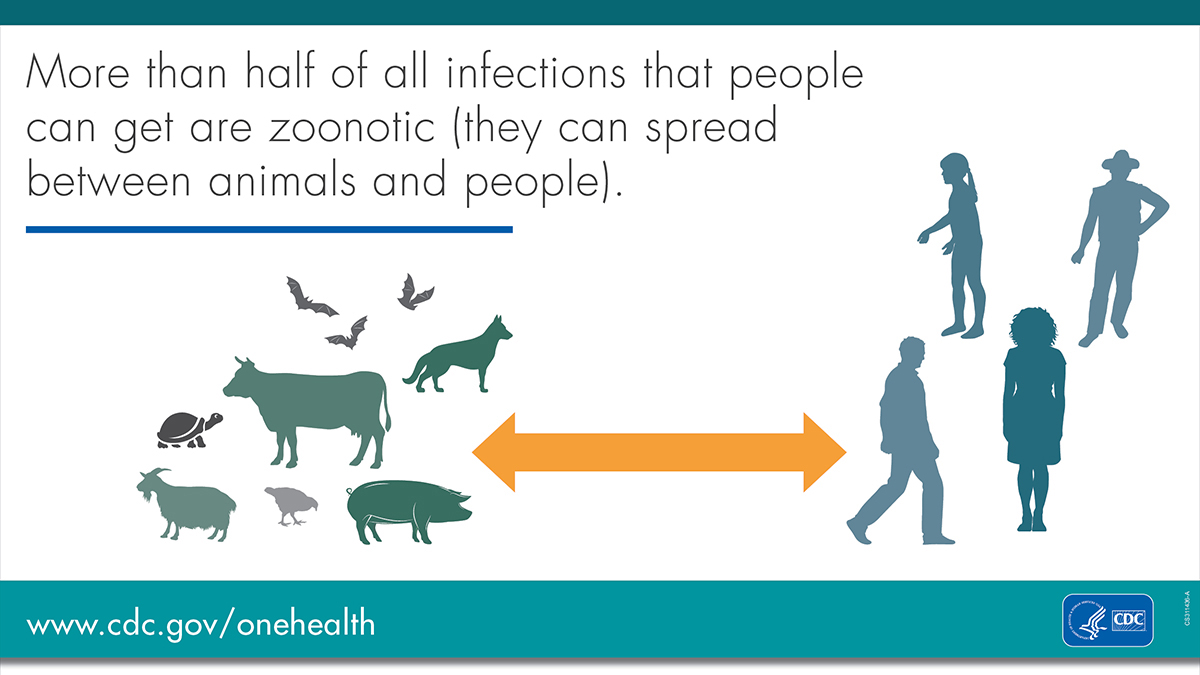 We’ve written previously about bats as a source of novel Bartonella species. Researchers test bats around the globe trying to find these species early. They’re also looking for other pathogens that may become a risk. One such pathogen is coronavirus. Coronaviruses were first discovered in the 1960s and were named for their shape. They mutate frequently in the wild and sometimes transfer to people. Although they typically cause mild common cold symptoms, such as coughing and sneezing, there is a risk that they can lead to more severe illness, as in the Middle East Respiratory Syndrome (MERS) and Severe Acute Respiratory Syndrome (SARS) outbreaks in recent years.

Minimizing the interaction people have with bats is one way to reduce this risk. This may mean not leaving fruit out in human settings where fruit bats live. In China, this has meant attempting to break an intermediate link of wild animals that have had exposure to bats and then to people in live animal meat markets.

All of this raises the question, why do bats host so many unique pathogens? The answer seems to be that they present a unique evolutionary challenge to pathogens. As pathogens co-evolve with bats, the bat immune system is able to keep serious infection at bay. Consequently, they may be able to clear infections or maintain them at low levels without compromising their own health.

These pathogens may simply remain in the bat and never reach a human. The bat’s immune system may keep the pathogen at very low levels so that even if the bat does encounter a human, it is not infectious. Consequently, the pathogen may pass through an intermediate host (i.e., another wild animal) before it reaches humans. This host is called an “amplifier host.” Unlike the bat, this host’s immune system is not as well-developed as the bat’s, so it may develop high levels of the pathogen. When humans are exposed to this animal, they might become infected too.

In late 2019, a novel coronavirus that became known as 2019-nCoV was reported in China. WHO named the disease caused by this virus coronavirus disease 2019, or COVID-19. The origin of the virus and its subsequent path to humans has not yet been completely pinned down, but scientists know that it is a zoonotic pathogen that likely originated in bats. Bats may have transmitted this disease to an amplifier host that was then captured and brought to a live animal meat market (as occurred with SARS), where humans were exposed to it and became sick with a novel coronavirus that originated in a bat.

As we wrote previously, Bartonella mayotimonensis is a species of Bartonella that was found in 2010 in the heart valve of a patient with heart and other symptoms of bartonellosis. Over the years, evidence developed that this was a zoonotic pathogen found in bats. It took seven long years before an exact DNA match to the species found in the patient was found in a bat. It is likely that the human patient served as an amplifier or accidental host.

Hemotropic mycoplasma is caused by bacteria from the Mycoplasma genus, which lack a cell wall and are unable to replicate by themselves. To survive they have to infect red blood cells. Like the other bacteria discussed here, emerging species are found in bats. Hemotropic mycoplasma may be a co-factor in white nose syndrome, a fungal disease that is killing bats.

A study that included Galaxy Diagnostics co-founders Ricardo G. Maggi, DVM, and Edward B. Breitschwerdt, DVM, and Galaxy Diagnostics chief medical officer B. Robert Mozayeni, MD, found that hemotropic mycoplasma infection was greater in subjects with animal or arthropod exposure at 4.7% of the group tested. This group was from several regions of the United States. A previous study of animal and veterinary workers in Shanghai had found 49% positive for hemotropic mycoplasma.

A novel species of Mycoplasma tentatively named Mycoplasma haemohominis has been found in primates and humans. Exactly where this species developed is currently unknown. In one case, a doctor in Japan developed a life-threatening multi-organ infection after being stuck with a needle that had been used to biopsy the liver of a patient who experienced liver injury and anemia after international travel.

The full report of this case is available to read for free on the internet. The authors note that the extensive genetic testing used to identify the infection and the illness that may have led to death before the testing was completed may mean that there are more cases of hemotropic mycoplasma than are currently identified.

In another case from Australia, a patient who had experienced fever, hemolytic anemia and pancytopenia for 10 months was tested extensively for infectious diseases without a cause being found. Whole genome sequencing of her bone marrow was completed and hemotropic mycoplasma was identified. The species was the found to be Candidatus Mycoplasma haemohominis. The authors note,

“This case report also highlights some shortcomings of the diagnostics methods applied in patients with PUO and how access research level, molecular techniques that incorporate animal pathogens can assist in diagnosis in a system that supports a ‘One Health’ approach”.

These two cases of just one newly identified species of hemotropic mycoplasma demonstrate the importance of continuing to survey bats to identify the novel (new) species that are being found in bat colonies.

The bat’s immune system allows it to survive pathogens that can be extremely damaging or deadly to people. As the human immune system ramps up to fight the same pathogen, humans can develop deadly complications such as heart disease and pneumonia. Tracing these diseases back to bats or other reservoir hosts can be complicated and time-consuming, but ongoing one health research allows novel organisms and diseases to be identified and transmission paths to be disrupted.

FOR PROVIDERS- LEARN HOW TO ORDER
FOR PATIENTS-PATIENT RESOURCES

Comments Off on Zoonotic Diseases & Why We Are So Interested in Bats (Bartonella, Mycoplasma, & Coronavirus)

Hugging it Out: How Physical Connection Helps Us Heal