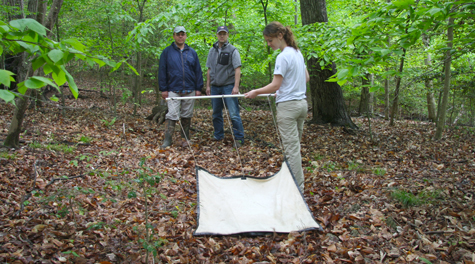 It’s a drag:  In a photo from 2013, Joanna Weeks ’13 drags a cloth to collect ticks working with W&M biologists Matthias Leu (left) and Oliver Kerscher. The three were among the co-authors on a 2019 paper that examines the link between a Lyme-like tick-borne disease and fragmented forested habitat.  Photo by Joseph McClain
by Joseph McClain |  October 17, 2019

“Nothing but a tick.”

“What’ll you take for him?”

—Tom and Huck, in Tom Sawyer

Ticks were evidently so rare in Samuel Clemens’ Hannibal that a single live specimen had value enough to tempt Tom Sawyer to part with his newly shed tooth. Matthias Leu says it was the same in the Switzerland of his more recent youth.

“When I was a boy, I spent all my time in the forest,” Leu said. “I never saw one tick. And in Switzerland now, you should not leave the trails because there are so many ticks. So, it’s not just in North America; it’s global.”

Great read which exposes the fact that little is known about the Ehrlichia chaffeensis bacterium which gives similar symptoms as Lyme disease. According to biologist Matthias Leu, “There probably has been a lot of ehrlichiosis that was misdiagnosed as Lyme.” Leu and his colleagues studied the habitat of the Lone Star Tick and found that forest fragmentation causes more edges which deer love, giving ticks an easy meal.

Leu explains that deer are “competent hosts,” serving not only as a meal for the tick, but also a reservoir for ehrlichiosis, capable of infecting the next feasting tick with Ehrlichia chaffeensis. He states that fawns and yearling deer are especially important in transmission of the bacterium.

“The failure to test for Ehrlichia, even as more and more evidence suggests that the infection may be just as common as other endemic tick-borne diseases, appears to impact patient care with antibiotics prescribed less frequently when testing is not ordered.”

For more on Ehrlichia:  https://madisonarealymesupportgroup.com/2018/12/02/everything-thats-known-about-ehrlichiosis/

Comments Off on Deer, Fragmented Forests, Ticks, a Lyme-like Disease….and a Little Praise for Possums