Alpha-Gal Syndrome: How to Diagnose, Treat, and Prevent the Tick-Borne Red Meat Allergy 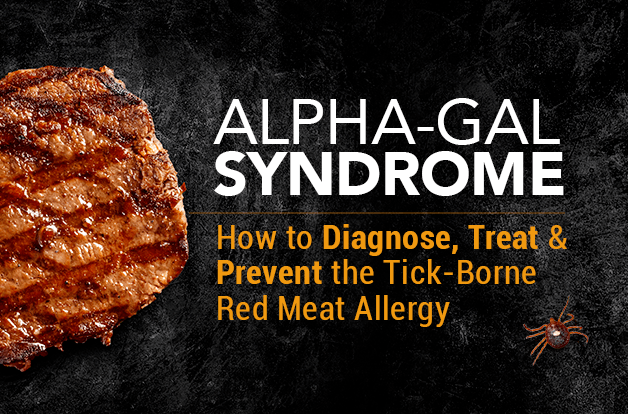 Alpha-Gal Syndrome: How to Diagnose, Treat, and Prevent the Tick-Borne Red Meat Allergy

Jennifer Burton lives in a subdivision in Northwest Arkansas on more than two acres of well-maintained land — all except for the one part which contains poison ivy that she can’t get rid of, she jokingly says. Burton loves to garden, and 1.5 acres of her property are fenced off for her plants and birds; she has fruit trees, berry vines, chickens, and guinea fowl.

“My husband Eric used to spray the yard with insect repellent, but once we got the chickens and guinea fowl, we stopped spraying,” says Burton. “They are great tick eaters, but they are also very noisy.”

Behind Burton’s subdivision is a heavily wooded area, so coming in contact with ticks — especially lone star ticks, which are widely distributed across the southeastern and eastern U.S. — isn’t uncommon for her. “Lone star ticks are the most aggressive ticks I’ve ever seen. They hunt in packs, crawling like a bunch of ants,” Burton describes. 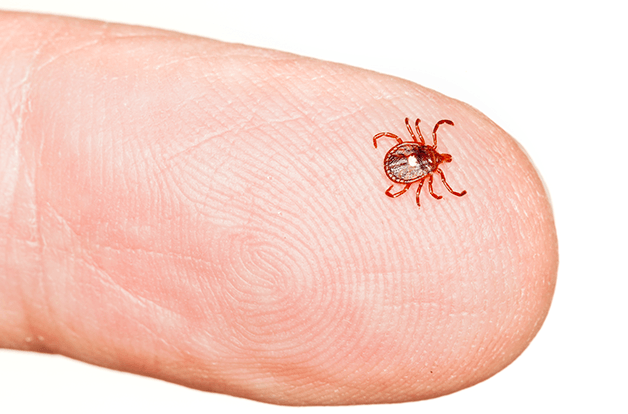 Burton is well-acquainted with the tactics lone star ticks use to seek out hosts. She’s been bitten many times over the past several years — first in 2011, then again in 2013, and most recently in 2016.

For Burton, 2016 also brought about an eight to nine-month assault of symptoms, including itchy hives, gastrointestinal issues, and vomiting. Doctors chalked up her escalating symptoms to an irritable bowel syndrome (IBS)diagnosis they found in her medical chart from years before, “possible” food allergies, or something she was eating.

By 2017, Burton had experienced four anaphylactic reactions approximately three weeks apart from one another. The last one brought her close to death. “It was almost like something was building up in my body,” she says.

Then, her husband, who’d been a consistent source of strength and support for her, got fed up with the lack of a diagnosis and effective treatment and hit a breaking point. “He insisted that our primary care doctor do something because he wasn’t going to watch me die,” Burton says. Finally, her doctor agreed to perform allergy testing; when the results came back, she learned she was highly allergic to beef and dairy, and mildly allergic to peanuts, despite having no history of such food allergies.

Her doctor was at a loss. Indeed, though news headlines about a dangerous meat allergy had begun to splash across the pages of nearly every major publication, most doctors knew little about it, its origins, or the severe, widespread symptoms it could induce.

Eventually, Burton saw allergist and immunologist, Tina Merritt, MD, an expert in alpha-gal syndrome (AGS) in Bentonville, Arkansas. Dr. Merritt was able to accurately diagnose Burton with AGS, and she traced the onset of the illness back to Burton’s history of lone star tick bites.

“Lone star ticks are the most aggressive ticks I’ve ever seen. They hunt in packs, crawling like a bunch of ants.”

Today, Burton runs the Alpha Gal Encouragers nonprofit, an advocacy, outreach, and support group for those diagnosed with AGS, and she estimates she feels about 90% most days. But her life is far from normal: On her wrist, she wears an emergency alert bracelet, which reads, “Anaphylaxis.” Everywhere she goes, she brings six EpiPens, two inhalers, and Unisom Sleep Melts because it’s a fast-acting antihistamine that doesn’t contain any mammal ingredients.

“I still have stomach issues. I’m not as active as I would like to be — my sweat makes my skin itchy. So, there are things I’m a little bit more restricted with, but I’m doing okay. Finally, I came to the realization that I have to live with this,” she says.

And with no cure in sight for AGS, Burton always has a flashlight and a tick key on hand for a swift tick removal if necessary. She knows that, for now, avoiding more tick bites is her best defense.

Alpha-gal is an abbreviated name for a sugar molecule that’s found in many mammals, with the exception of humans and primates like apes and monkeys. The sugar’s full name is galactose-α-1,3-galactose, and for most people, it doesn’t pose a health threat. 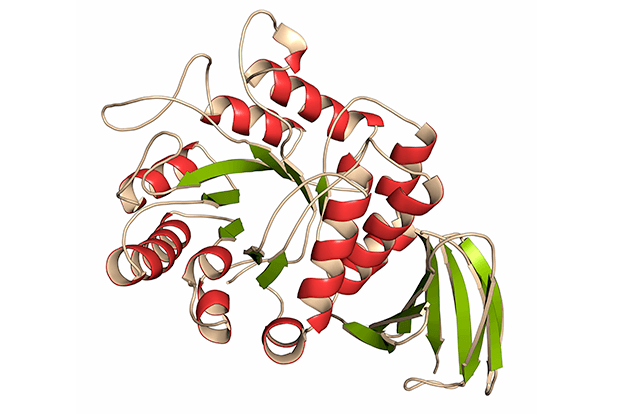 But for people like Burton, who have developed AGS, their bodies react to the molecule with an exaggerated immune response to red meat like beef, pork, venison, or lamb. (Burton suspects her mild reaction to peanuts might be linked to some manufacturers using gelatin — a mammalian ingredient — to preserve their peanuts.) Sometimes, the immune response produces mild, allergy-type symptoms. Other times, life-threatening, anaphylactic reactions can occur.

AGS is thought to be the result of a tick bite by the lone star tick, a bloodsucking arachnid that’s fairly easily recognized: Females have a single white dot in the center of a brown body, while males have white spots or streaks around the outer edge of the body.

“It was almost like something was building up in my body.”

Unlike with ticks that transmit Lyme disease and coinfections, however, a lone star tick doesn’t have to be attached to its human host for any length of time — alpha-gal is present in tick saliva, which means an immune response can be triggered right as the tick bites you. In addition to alpha-gal, lone star ticks can carry other tick-borne infections like Rocky Mountain Spotted Fever, Ehrlichiosis, Rickettsia, and more.

But as with all things tick-related, the lone star tick and alpha-gal are spreading across other parts of the country and beyond. Cases of the illness have also been reported in Australia, Asia, Central America, Europe, Japan, and South Korea, though the illness is likely to come from different tick species in other parts of the world. 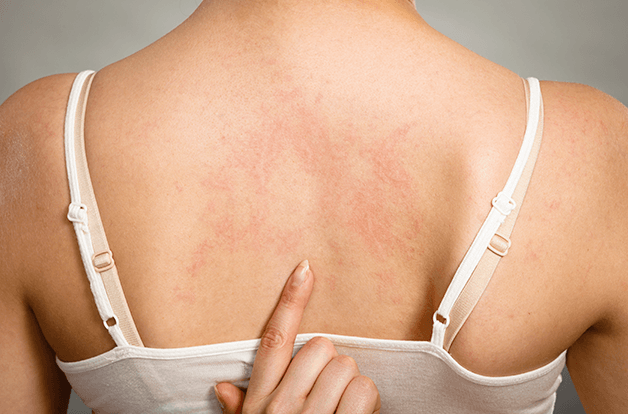 Many food allergies have a rapid onset — think shellfish or peanut allergies. But alpha-gal is different, which can complicate the process of getting a proper diagnosis. Typical reactions to the sugar were delayed by at least two hours, with the majority of people experiencing reactions three to six hours after consumption, suggests a review in the journal Current Allergy and Asthma Reports.

Allergy symptoms associated with alpha-gal include:

To further compound the problem, alpha-gal reactions may not be confined to red meat allergies alone. People can be allergic to a variety of mammalian products: dairy products, gelatin, lanolin (found in cosmetics and personal care products), magnesium stearate, and certain vaccines and medicationscan pose a serious problem to the community of people with AGS. With a delayed immune response, it can be difficult to pinpoint the culprit that’s making you sick.

An allergist or other healthcare professional will gather your health history and information about your symptoms and potential exposure to ticks. They can diagnose AGS through a blood test, which looks at the IgE antibodies to alpha-gal in your blood. They can also use a skin prick test to determine if you’re allergic to specific foods like red meat found in beef, pork, or lamb.

There is no cure for AGS, but avoiding red meat and other mammalian products can help reduce the incidence of reactions. Also, keep in mind that alpha-gal can be found in a variety of other products. It’s important to read labels on all the products you consume and use for ingredients that could be derived from red meat.

You may need to carry prescription epinephrine (like EpiPens) and other antihistamines with you at all times. Though the symptoms of AGS can wax and wane, you’ll need to try your best to avoid further tick bites and reduce the chances of worsening your immune system’s response to the molecule.

Since there is no cure for AGS, the best way to avoid contracting it is through preventing tick bites. Ultimately, an aggressive approach to prevention is key to protecting you and your family from a multitude of tick-borne diseases. Here’s what you need to know:

For a more comprehensive guide, visit 7 Steps to Preventing Lyme and Other Tick-Borne Diseases.

Further Reading and Research to Help You Cope

Coping with alpha-gal is challenging, to say the least. But knowing where to look for help and advice when you’re forced to make abrupt lifestyle changes can be lifesaving. Fortunately, there are some organizations and resources available, so you don’t have to go at this alone.

Often, articles on the subject of alpha-gal suggest that the syndrome may simply disappear in people after two to five years. However, Burton has a different take on the illness: “Some people think it just goes away on its own. But I try to refer to it as remission because it can come back, and when it does, it comes back with a fury,” she says. “Ultimately, I wish people would take tick prevention seriously. Don’t get bit. Don’t get sick.”

Comments Off on Alpha-Gal Syndrome: How to Diagnose, Treat, and Prevent the Tick-Borne Red Meat Allergy