This tick bites, clones itself and lays 2,000 eggs 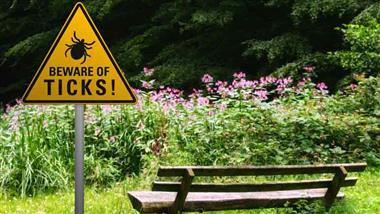 While you might have thought a tick is an insect, it really belongs to the arachnid family, along with spiders, scorpions and mites.1 A tick survives by feeding on the blood of a host, growing from the size of an apple seed before food and swelling to more than double their size after feeding.2

Ticks are more active during the summer months, between March and November in the northern hemisphere. Most enjoy living in warm moist places, such as bushes, tall grasses and shrubs. Animals and humans get ticks while walking through these areas.3

Of the 899 species of ticks found throughout the world, only 90 reside in the U.S.,4 and just a select few are known to bite humans.5 After a tick gets on you, it doesn’t usually bite right away but will crawl around to find an acceptable place to latch on and feed. They look for soft, moist areas, including near your ears, hair, underarms and groin. They also like to settle under the waistband of your pants.6

After piercing your skin with its mouth, the tick inserts a tube to feed on your blood until it’s full. This may take up to two weeks.7 Tick bites are often painless so it may be difficult to tell if you’ve been bitten.

First new tick species in US in 50 years

In the past decade the U.S. has become home to a new species, the Asian longhorn. Dr. Gregory Poland from the Mayo Clinic says this tick represents the first time in 50 years a new species has made its way to the U.S.8 Because it is an emerging threat in the U.S. the CDC recommends that surveillance should include testing for pathogens.9

Ticks are associated with diseases in humans and animals. The Asian longhorn tick is known to carry human hemorrhagic fever caused by thrombocytopenia syndrome virus10 in Asia.11 This species has been found in 11 states, including:12

However, while it appears to be spreading across the eastern U.S., the CDC has reported there is currently no evidence these ticks have transmitted disease to humans or animals.13 Asian longhorned ticks in Asia carry a virus responsible for killing 15% of those they bite.14

In recent years, this population has spread to several Pacific Islands, Australia and New Zealand. Although some experts warn against extrapolating information to the Asian longhorn tick carrying serious viruses in the U.S.,15 this species also represents additional dangers to livestock and other animals.16

Asian tick sounds like something from a horror film

Samples from the cows confirmed the ticks were Asian longhorn. According to Meckes, this was the fourth confirmed case since 2018 and the first in 2019.19 One young bull presented to the diagnostic lab for necropsy had 1,000 ticks. As described in this short video, the ticks are aggressive biters, feeding on both animals and humans.

The first identified case, in 2010, involved a white-tailed deer from West Virginia.20 In other reports the tick was found in New Jersey in 201721 when a woman discovered them on her sheep.22

The first recorded human bite was reported by a 66-year-old man from Yonkers, New York, in June 2018. He removed the tick from his leg and subsequently took it to the Lyme Disease Diagnostic Center in Westchester County for testing.23 After confirmation that it was the Asian longhorned tick, sampling was done near his home and nearby park, finding 90 ticks.24

A unique characteristic of this species is its ability to reproduce quickly and prolifically without mating.25 The female does not need a male to lay as many as 2,000 eggs at a time.26 The threat to livestock may be significant. A dairy cow may experience a 25% drop in milk production after becoming a host.27

As the species continues to multiply and spread, it is conceivable millions of animals could be exposed.28 A study published in the Journal of Medical Entomology29 developed a model demonstrating the wide area of North America where favorable conditions for the Asian longhorned tick may exist.30

Study author Ilia Rochlin, Ph.D., is a professor at Rutgers University. She believes the adaptability of this species means it has the potential to spread across the U.S. and southern Canada.31 The ability of the tick to reproduce without mating may make it extremely hard to control. Rochlin said,32 “In practice, it’s impossible to eradicate this species.”

Tick population rising, along with the diseases they carry

The number of all ticks and the range in which they live have both increased. According to the CDC,33the lone star tick has expanded from the southeastern U.S. into the northern and Midwestern states. The range of the black-legged tick, responsible for many cases of Lyme disease, has more than doubled in the past 20 years. Between 1993 and 2012, the number of counties in the U.S. at high risk for Lyme disease rose by more than 300%.34

Although the Asian longhorned does not yet carry disease, many other ticks do. The CDC announced it will begin monitoring the population and diseases ticks carry as the number of people diagnosed with diseases carried by ticks has more than doubled. Anna Perea, from the CDC’s Division of Vector-Borne Diseases, commented on the new monitoring:35

“For the first time this year, the CDC is funding states to conduct widespread surveillance of ticks and the pathogens they can transmit, in addition to funding human disease surveillance and education and prevention. Taken together, the data can help define areas where ticks are spreading, the infectious pathogens that they carry, and where risk of tick-borne disease is increasing.”

Tick-borne diseases may include Lyme disease, suspected to affect nearly 300,000 people each year.36 Rocky Mountain spotted fever, anaplasmosis, ehrlichiosis and babesiosis are also spread by ticks. New infections have also been detected, including the Bourbon virus, Heartland virus37 and Powassan virus.38 Ticks spread disease by virtue of the way they find nutrients.

In order to transition through life stages, ticks must have a blood meal to survive.39 Through the process of hatching from the egg, going through the larvae, nymph and adult stage, they may live up to three years. If unable to find a suitable host, they die.40 As they ingest blood, they also suck up any pathogens from the host and spread it to their next host.

The rising number of ticks and their spreading habitat has meant an increase in the number diagnosed with tick-borne diseases. Lyme disease is the most prevalent of those conditions. CDC41data show that in 1997, there were 12,801 confirmed cases which more than doubled to 29,513 confirmed and 13,230 probable cases in 2017.

Data also show more males than females are affected, with the age group of 5 to 9 years having the greatest number affected. The disease is most frequently diagnosed in the months of June and July.42One study from researchers at Carnegie Mellon University43 called the rising epidemic of Lyme disease a “Ticking Bomb.”

These researchers found a relationship between rising temperatures and the incidence of Lyme disease, predicting the number of people diagnosed may rise by more than 20% by midcentury.44 In addition to temperature playing a role in the rising number of tickborne illnesses, researchers find smaller patches of forest may also increase the number of Lyme carrying ticks.

Felicia Keesing from Bard College, New York, and other researchers have found an average of three times the number of ticks in a three-acre forest fragment than in larger areas. As many as 80% of the arachnids in the smallest patches were infected.48

Challenges of diagnosis and treatment for Lyme disease

Although the disease has been around for thousands of years, the medical community only began describing it in the 1970s. An autopsy of a 5,300-year-old mummy found the presence of the bacteria and a German physician first wrote about symptoms more than 130 years ago.49

Lyme disease is caused by a bacterium, which when left untreated may spread to the joints, heart and nervous system. The bacterium, Borrelia burgdorferi, may be treated successfully when found early.50 However, while commonly acknowledged now, Lyme disease has historically been a challenge to diagnose.

CNN reported51 on a U.S. Air Force enlisted man, Ruben Lee Sims, who was voted the “top enlisted management analyst of the year” in 1977. Only seven years later he was discharged and labeled a hypochondriac when the military was unable to diagnose Lyme disease. Misdiagnosed for more than three decades, he now shares his story to help others.

Early symptoms resemble the flu and the bullseye rash is not always recognized.52 Within 30 days of being bitten, you may experience fever, chills, fatigue and muscle and joint aches. Up to 80% of those infected will have a rash resembling a bull’s-eye target at the site of the tick bite, which gradually reaches 12 inches or more across.53

Later on, signs of infection may include severe headache and neck stiffness, a spreading rash on other areas of your body, severe arthritis pain and swelling, facial palsy, heart palpitations and possibly an irregular heartbeat.54 If left untreated, you may develop inflammation of the brain and spinal cord. This can lead to pain, numbness and tingling in the hands and feet as well as problems with short-term memory.55

Some people have seen multiple physicians and undergone a plethora of tests before being given a correct diagnosis.56 Early tests may not detect antibodies to the bacteria as it may take several weeks to rise to detectable levels.

Since early treatment is most effective57 some physicians begin treatment before offering a definitive diagnosis.58 The Lyme antibody test looks for exposure to the bacteria, but it may take your immune system several weeks to produce measurable levels. This can result in a false negative test with early testing.59

You’ve found a tick — now what?

Anytime you’re out in grassy areas or around trees and bushes do a quick skin check when you get back inside. Look for small brown to black spots or crawling, eight-legged arachnids. If the tick is unattached to your skin and has not fed, slip a sheet of paper under it and seal it in a container with alcohol.

However, if it’s become attached to your skin, it’s important to remove it to lower your risk of infection. While there are several tools on the market you may want to consider, a set of fine-tipped tweezers will also do the job. According to the CDC you should:60

Avoid using techniques such as painting the tick with nail polish or covering it with petroleum jelly. This will not suffocate it. Likewise, poking it or using heat to make it detach are not recommended.62

Once a tick has been safely removed drop it in a sealed container with alcohol and take it to your health department or Lyme disease center for identification. Keep an eye on the area for the next several weeks. If you develop a rash or flu-like symptoms, see a doctor who’s experienced in treating Lyme disease.

A few points for consideration:

Comments Off on This Tick Bites, Clones Itself & Lays 2,000 Eggs