Congressman renews call for new US strategy on Lyme disease 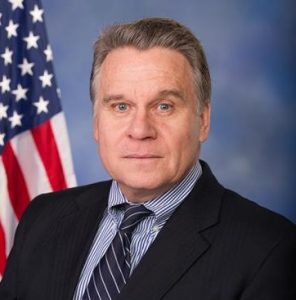 On January 3, New Jersey Congressman Chris Smith reintroduced legislation to create a new national strategy on Lyme disease and other tick-borne diseases and to strengthen efforts across the federal government to fight, treat and prevent tick-borne disease.

“The 2018 report of the Department of Health and Human Services’s Tick-Borne Disease Working Group made it clear—tick-borne diseases are spreading rapidly and are far outpacing our current national response to this problem,” Rep. Smith said.

“My bipartisan legislation would create a new national strategy on Lyme disease and better coordinate efforts across federal agencies to make sure our response is targeted and effective. We must have all hands on deck to combat these diseases.”

Minnesota Congressman Collin Peterson is the lead Democratic co-sponsor of the legislation. “As a co-chair of the Congressional Lyme Disease Congress, I understand the importance of a coordinated federal response to Lyme disease and other tick-borne illnesses,” said Rep. Peterson.

“The strategy outlined by the National Tick-Borne Diseases Control and Accountability Act will help improve our ability to research, diagnose, and treat these rapidly growing threats.”

Smith, the founder and co-chair of the Congressional Lyme Disease Caucus, introduced the bill on Thursday on the first legislative day of the 116th Congress.

The bill comes shortly after the HHS Tick-Borne Disease Working Group released its first annual report to Congress, which stated that “[t]ick-borne diseases have rapidly become a serious and growing threat to public health in the United States.”

Last May, Smith introduced the National Tick-Borne Diseases Control and Accountability Act (HR 5878) which he has now reintroduced in the 116th Congress.

Among many key provisions, the Smith-Peterson legislation:

The idea of a working group for tick-borne diseases was first included in Smith’s Lyme Disease Initiative of 1998 to ensure that a diverse array of voices was included in the federal government’s policy to fight Lyme disease—patients, patient advocates, doctors, researchers and on-the-ground officials from state and county health organizations.

Since he introduced that legislation, Smith has repeatedly pushed for the creation of such a group including his 2011 measure, HR 2557, to create the Tick-Borne Diseases Advisory Committee.

“US is not prepared to deal with this threat”

She said of the legislation, “Everyone deserves protection against Lyme disease, yet Lyme has marched forward unchallenged across the US for decades, disabling many including our most precious resources, our children, who are a high risk group.

“CDC announced in its Vital Signs monthly report that tick-borne disease case numbers have doubled between 2004-2016, and the US is not prepared to deal with this threat—a fact substantiated by the 2017 record number of CDC-reported Lyme cases, 42,743. Factoring in under-reporting, 427,430 new Lyme cases occurred in the US alone in 2017, a staggering number, which does not include other tick-borne diseases (TBD) and disorders facing Americans.”

“Everyone is a potential casualty”

“Tick vectors of disease continue to proliferate unchecked, and the recent emergence over last year of a new self-cloning tick in the US that can lay up to 2,000 eggs, longicornis—that has already spread to nine states—should signal that we have a new enemy, yet we still have no idea what damage this one can do,” Pat Smith said.

“This bill provides a plan for a national strategy under HHS to help, through research, patients already debilitated by Lyme/TBD—fighting for diagnosis, treatment and for their very lives—and to help prevent others from facing the same fate by developing methods of tick control.  The time for Congress to act on this bill is now!  Losing this war is not an option, everyone is a potential casualty.”

Rep. Smith has been a champion in Congress for advocating for patients with Lyme and other tick-borne diseases.

As co-chair of the Congressional Lyme Disease Caucus, he successfully pushed for the inclusion of $5 million in FY2016 funding of tick-borne disease research in the DOD’s Congressionally Directed Medical Research Program (CDMRP).

Press release source: The Office of US Congressman Chris Smith.