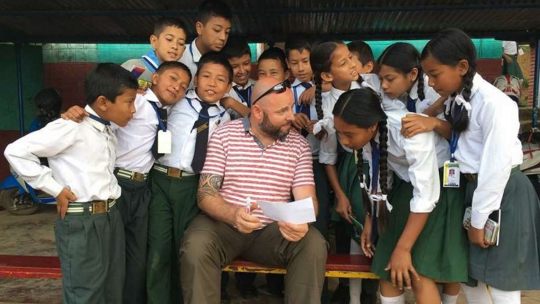 Keith Poultney was teaching English in Nepal when he was bitten by a tick, which spread a rare infection throughout his body leaving him with memory loss and fatigue. (Solent News)

A 40-year-old English teacher from the U.K. who was bitten by a tick in his ear while volunteering in Nepal two years ago said he still has trouble with his memory and coordination after the infection left him suffering from hallucinations and brain swelling.

Keith Poultney, who said he didn’t realize he had been bitten by the tick during his 2017 trip until a few days after developing discomfort in his ear, initially wasn’t concerned about his illness while in Nepal because others in his group had developed colds or the flu, according to The Sun.

“They treated me with antibiotics, but what they didn’t know was that the type of infection I had developed was resistant,” he said of his treatment in Nepal. “I flew home as planned, but the flight, a 12-hour flight via the Middle East, was the worst experience of my life.”

Poultney initially wasn’t concerned about his symptoms because others in his group had been dealing with colds, but then he developed hallucinations and severe head pain. (Solent News)

He said at one point his temperature reached 104.9 and he developed severe head pain. He was rushed to Queen Alexandra Hospital in Portsmouth, where he was eventually diagnosed with encephalitis and a rickettsial typhus infection, which is typically transmitted by fleas, ticks, mites and lice and in some cases can be fatal.

According to the Centers for Disease Control and Prevention (CDC), immediate treatment should be started in a patient with a suspected case of rickettsioses before confirmation is complete due to the rapid progression of the infection.

Transmission is most common during outdoor activities in the spring or summer months when ticks and fleas are most active, with a 5-14 day incubation period for most rickettsial diseases, meaning symptoms often don’t start until after the trip as ended. The most common rickettsial diseases found in travelers are in the spotted fever or typhus groups.

“I felt different in myself,” Poultney, who is still dealing with fatigue, told The Sun. “I had real problems with my balance and was unable to walk in a straight line. I physically felt as though I was impaired or drunk. I could not gauge space or distance and would often walk into door frames or knock things such as drinks over.”

Nearly two years after his diagnosis and treatment, Poultney said he still has issues with his memory, and has started working with Headway, an organization that provides support to brain injury patients.

“Without Headway’s help, I know my recovery would have been slower and more frustrating,” he told The Sun. “They were there to pick me up from a very low point in my life. I know my brain has been altered and that will most likely never change. But I also know that I shouldn’t try to deal with this on my own.”

In this article, a treatment resistant Rickettsial Typhus is obviously transmitted by a tick.  This is important to acknowledge.  In the following CDC information, there are numerous types of typhus but not many commonly thought to be transmitted by ticks.

Tick-associated reservoirs of R. prowazekii (epidemic typhus) have been described in Ethiopia, Mexico, and Brazil, but the role of ticks in the natural transmission of R. prowazekii has not been characterized.

Unfortunately, the article does not mention what typhus strain caused this.

Most rickettsial pathogens are transmitted by ectoparasites such as fleas, lice, mites, and ticks. It can also be transmitted by inoculating infectious fluids or feces from the ectoparasites into the skin. Inhaling or inoculating conjunctiva with infectious material may also cause infection.  Transmission after transfusion or organ transplantation is rare but has been reported.

Clinical presentations vary with the causative agent and patient; however, common symptoms that typically develop within 1–2 weeks of infection include fever, headache, malaise, rash, nausea, and vomiting. Many rickettsioses are accompanied by a maculopapular, vesicular, or petechial rash or sometimes an eschar at the site of the tick bite.

Treatment of patients with possible rickettsioses should be started when disease is suspected and should never await confirmatory testing, as certain infections can be rapidly progressive. Immediate empiric treatment with a tetracycline, most commonly doxycycline, is recommended for all ages. Almost all other broad-spectrum antibiotics are not helpful. Chloramphenicol may be an alternative in some cases, but its use is associated with more deaths, particularly for R. rickettsii. In some areas, tetracycline-resistant scrub typhus has been reported. Azithromycin may be an effective alternative. Anaplasma phagocytophilum infections may respond to rifampin, which may be an alternate drug for pregnant patients. Expert advice should be sought if alternative agents are being considered.

Doxycycline is the front-line drug for typhus and broad-spectrum antibiotics aren’t helpful.

Fact sheet on typhus: https://www.health.nsw.gov.au/Infectious/factsheets/Factsheets/typhus.PDF   The perps are typically lice, fleas, mites, and ticks.
https://madisonarealymesupportgroup.com/2018/08/19/monster-ticks-found-in-germany-threaten-europe-with-deadly-disease-crimean-congo-fever/ In this article, they found a tropical form of tick typhus in tropical ticks found in Germany. Typhus is making a comeback, particularly in the southern U.S. Migrating birds are transporting ticks as well as the diseases they carry worldwide.

Remember:  There’s no such thing as a “good” or “insignificant” tick.

All ticks are suspect until proven otherwise.