Since the recent death of a Wisconsin resident due to Rocky Mountain Spotted Fever (RMSF) it’s important we understand this pathogen as it’s in our neck of the woods:  https://madisonarealymesupportgroup.com/2018/07/10/first-rmsf-death-in-wisconsin/

The following article by doctors Lapenta (father & son) explains how devastating this particular tick borne illness is and what you need to know about it.

THE ROCKY MOUNTAIN SPOTTED FEVER AND THE NEW PLAGUE OF THE 21ST CENTURY, THE TICKS 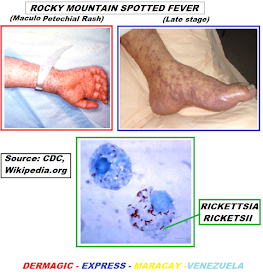 In this publication we bring you another disease caused by the bite of several TICKS; it is the ROCKY MOUNTAIN SPOTTED FEVER, which is caused by a bacterium called Rickettsia Rickettsii, and also another recently discovered the Rickettsia Parkeri. This disease, described since the 1900s, is disseminated in North America, from Canada to South America. The purpose of this publication is to know the main vectors of the disease, how it is transmitted, its symptoms, treatment and to give warning to the world once again that these parasites, ticks are the new plague of the 21st century.

Hello friends of the network, today DERMAGIC EXPRESS brings you another interesting topic about the TICKS and the diseases they transmit, in this case it is the ROCKY MOUNTAIN SPOTTED FEVER (RMSF), which as I said is transmitted by the a tick bite and disseminated not only in the United States, has also been described in the AMERICAS under the name of “Sao Paulo fever” or “Fever maculosa” in BRAZIL; In MEXICO “Spotted fever” and “tick Typhus” or “Tobia Fever” in COLOMBIA. Cases have also been described in Costa Rica and Panama. [1-5]

This disease is produced by the BACTERIA called Rickettsia Rickettsii; gram-negative intracellular cocobabicil considered the most pathogenic strain of the Western Hemisphere and a small part of the Eastern Hemisphere. It belongs to the Rickettsiaceae Family, Order: Rickettsiales, Class: Alphaproteobacteria, Domain: Bacteria, Genus: Rickettsia and species: Rickettsia rickettsii. The disease extends from CANADA to SOUTH AMERICA, and is the most frequent rickettisial disease in the United States. [6-11] 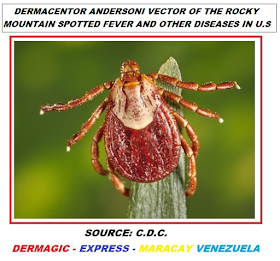 The main TICK transmitter of this bacterium are the ticks of the DERMACENTOR genus, Family Ixodidae, known as “HARD TICKS” which, in addition to transmit the Rickettsia rickettsii, are transmitters of other diseases such as: TICK PARALYSIS (neurotoxin); the POWASSAN virus (Powassan encephalitis); THE FEVER Q (Coxiella burnetii); ANAPLASMOSIS in cattle and humans (Anaplasma Marginale and Anaplasma spp.); TULAREMIA (Francisella tularensis) and the BABESIOSIS in  equine (piroplasmosis) and humans  (Babesia Caballi and Babesia spp.). [12-18]

The DERMACENTOR genus of ticks belongs to the Ixodidae Family and has more than 34 described species and the most involved in the ROCKY MOUNTAIN SPOTTED FEVER are DERMACENTOR ANDERSONI (Rocky mountain tick) and DERMACENTOR VARIABILIS (American dog tick), second main vector causing this disease.

Of this “hard tick” (DERMACENTOR VARIABILIS) I can say to you that in addition to transmit the ROCKY MOUNTAIN SPOTTED FEVER, it is transmitter of TULAREMIA (Francisella tularensis). They can also be carriers of the Anaplasma phagocytophilum that causes the HUMAN GRANULOCYTIC ANAPLASMOSIS, and Ehrlichia chaffeensis, causal agent of the HUMAN MONOCITIC EHRLICHIOSIS; and in addition they can produce TICK PARALYSIS when introduce a NEUROTOXIN when  are feeding with human blood.

In addition to the DERMACENTOR VARIABILIS and ANDERSONI TICKS as vectors of the ROCKY MOUNTAIN SPOTTED FEVER (RMSF), other species have been described: RHIPICEPHALUS SANGUINEUS (brown tick of the dog), AMBLYOMMA CAJENNENSE (Cayena tick) which is disseminated in South and Central America, AMBLYOMMA AMERICANUM (Lone Star Tick) and AMBLYOMMA MACULATUM (Tick of the Gulf Coast) involved in the transmission of this disease. [1-22]

In addition, it has been demonstrated in the tick DERMACENTOR VARIABILIS AND RETICULATUS antibodies against BORRELIA BURGORFERI which is the causal agent of the already described LYME DISEASE or ERITHEMA MIGRANS, but they are not considered vector of it.

The disease ROCKY MOUNTAINS SPOTTED FEVER, is also known under the name “TYPHUS BY TICKS”, and “BLUE DISEASE” and was described in the years 1800 and 1900 in the Valleys of Montana United States, (US), known at that time as “Black measles” for its clinical characteristics. Later it was discovered that the ticks were the vector of the same one and it was in the year 1906, when the scientist Howard T. Ricketts discovered the causal agent, described as an agent “smaller than a bacterium and longer than a virus”; it was called RICKETTSIA RICKETSII in honor of its name. [22-30]

We must remember that Willy Burgdorfer is intimately linked to the ROCKY MOUNTAIN SPOTTED FEVER and study of the Rickettsias; In fact, between 1967 and 1978, he was investigating the Rickettisial Zoonoses in Egypt and then he was sent by the WHO (1976-1986 – World Health Organization) to Montana, United States, and in the course of his investigations he discovered the FEARED ESPIROCHETE BORRELIA, in the year 1981, which carries in its honor the surname BURGODERFERI.

These ticks are the NATURAL HOSTS and they serve as RESERVOIRS AND VECTORS, they transmit the RICKETTSIA through the bite to vertebrates mammals and man, and unlike other diseases they only need to be attached 2 hours to the skin to achieve the transmission of the disease, so that it is a ZOONOSIS, transmitted from animals to man. It can also be transmitted through fluids, tick feces and contaminated tissues of the same.

Symptoms of the disease appear after an incubation period of 1 to 2 weeks, (can affect children and adults) and include threee stages:

3.)  POSTERIOR or LATE stage: the  Rickettsia may invade the brain, heart, eyes, lungs, kidneys, gastrointestinal tract, and other organs causing definitive sequel such as: deafness, ataxia, blindness, and loss of bladder and bowel control; in extreme cases amputation of limbs by gangrene. Mortality in severe cases: 30-80%

The “CLASSICAL TRIAD” of this disease in terms of symptoms is: 1) FEVER, 2) MACULOUS AND PETECHIAL ERUPTION AND 3) THE PRECEDENT OF TICK BITE; it should be noted that only 35 to 60% of patients manifest the complete TRIAD, and 40% do not present the TYPICAL rash of the disease; it is presented in a centripetal form, from the extremities to the trunk. [1-32]

The treatment of choice for THE ROCKY MOUNTAIN SPOTTED FEVER (RMSF) is the  DOXYCYCLINE (tetracycline antibiotic), the same used in the LYME disease and EHRLICHIOSIS, which is administered for a period of 10 to 14 days, and in some cases may be more longer. The other antibiotic that shows effectivity against Rickettsia is  the CHLORANPHENICOL, but this should be used with caution as it has many side effects.

With this I want to tell you in a simple way how seven (7) TICKS are capable of transmit nine (9) diseases:

Including the ticks of the Family ixodidae: IXODES SCAPULARIS or the black legged tick.

“… perhaps other diseases …. Today not well documented or simply man has not discovered yet.”

On the web you can find thousands of articles about the ROCKY MOUNTAIN SPOTTED FEVER, HISTORY AND SYMPTOMS, but for us the main objective of this publication is to make you UNDERSTAND the following:

1) These TIICKS are distributed practically in the entire PLANET.

2) Transmit parasitic diseases with risk of MORTALITY if the diagnosis and treatment is not made in time.

3) Some of the transmitted diseases are RESISTANT to treatment such as LYME disease, leaving permanent sequel in the body, being able to confine the patient to a wheelchair for life.

4) Apart from fighting for the human rights of the unassisted for diseases such as LYME, the final destination is to fight against the TICKS and their HOSTS.

5) THE CODES ICD-11 (International Classification of Diseases, year 2018) for this disease, Rocky Mountain Spotted Fever have been recognized by the World Health Organization (WHO) a long time ago, but  in some cases as the Lyme disease, the scientific society and affected population awaits its inclusion.

“… Humanity is not going to be extinguished by atomic bombs thrown into the air, atomic bombs walk in the earth attached to animals, mice, rats, birds, coyotes, deer, dogs, cats, cattle, goats, camel sheep, rabbits, etc, or the humans, feeding on his blood, contaminating and spreading vertiginously, slowly creating a incapacitated society … “

For more on RMSF:  https://madisonarealymesupportgroup.com/2017/10/21/mom-got-rocky-mountain-spotted-fever-while-picking-pumpkins/

https://madisonarealymesupportgroup.com/2018/08/19/monster-ticks-found-in-germany-threaten-europe-with-deadly-disease-crimean-congo-fever/  Please note the last quote of the story – that they proved a tropical form of tick typhus in one of tropical ticks found in Germany. Typhus, a bacteria, is making a comeback, particularly in the South. Common in the U.S. in the 40’s, and normally attributed to lice, now it’s been proven to be in a tick. In other words, another disease and a tick found where they supposedly shouldn’t be.
Typus is a rickettsial infection with ticks carring numerous species including rickettsia, ehrlichia, and anaplasma. Rocky Mountain Spotted Fever is also considered a tick-borne typhus fever. https://www.health.ny.gov/diseases/communicable/rocky_mountain_spotted_fever/fact_sheet.htm  Divided into the typhus group and the spotted fever group, disease is transmitted through ectoparasites (fleas, lice, mites, and ticks). Inhalation and inoculating conjunctiva with infectious material can also cause disease. The good news for most is that doxycycline is a front-line drug for it. Broad-spectrum antibiotics aren’t helpful.