7 Lyme Disease Symptoms That Are Way Too Easy to Ignore

Lyme disease can do more than cause a rash—and if you don’t notice the symptoms right away, you’re at risk for major complications.

Lyme disease is the most commonly reported insect-transmitted disease in the United States, affecting an estimated 300,000 people a year, according to the Centers For Disease Control and Prevention (CDC). In certain parts of the country (like the northeast or upper Midwest), checking for ticks is practically a summertime rite of passage.

Experts know that Lyme disease is caused by the bacteria Borrelia burgdorferi, which is transmitted from the bite of an infected tick. But diagnosing the condition isn’t always so straightforward. Once inside your body, the bacteria can wreak havoc in a number of ways. Yes, that can include the classic bullseye-shaped rash. But many of the other symptoms of Lyme disease aren’t as well known, and they can be frustratingly vague.

That’s why it’s important to familiarize yourself with the signs and seek medical assistance if you think you or a loved one may have Lyme. The disease is easy to treat as long as you know what to look for.

The first signs of Lyme can strike anywhere from 3 to 30 days after getting bitten by an infected tick. They can include:

Up to 80 percent of people will develop a red rash in the days or weeks after contracting Lyme disease. It usually forms at the site of the tick bite, and the redness is basically an allergic reaction to the tick’s saliva, says Nikhil Bhayani, MD, an infectious disease specialist at Texas Health Hurst-Euless-Bedford.

Lyme disease rashes will often be bullseye-shaped, but they can also just be a red blotch. The rash will usually expand with time and can get as big as 12 inches. It might feel warm to the touch or look a little crusty in the center where you were bitten, but it won’t be itchy or uncomfortable.

The flu-like symptoms are a result of your immune system’s attempt to fight off the bacterial infection and help you get better, says Kalpana D. Shere-Wolfe, MD, an infectious disease specialist the University of Maryland Medical Center Midtown Campus.

Of course, these kinds of symptoms could indicate many different illnesses. One clue that a tick bite caused them? With Lyme disease, you won’t experience the coughing or congestion that often comes with the actual flu, Dr. Shere-Wolfe says. 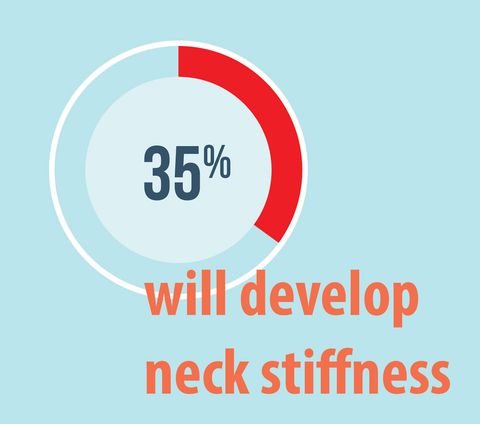 After a month or so, people infected with Lyme disease may start showing additional symptoms. These can include:

As the Lyme disease infection spreads throughout the body, your rash might start to expand even more. You might also develop new, smaller rashes nearby. Like the early rash, these might be bullseye-shaped. But they can also just look splotchy or blob-like, according to the CDC. They might even take on a slightly bluish tint in the middle.

Borrelia burgdorferi is one of the few bacteria that can cross the blood-brain barrier and infect the central nervous system, explains Timothy J. Sellati, PhD, Chief Scientific Officer for the Global Lyme Alliance. That can lead to inflammation of the brain, which can affect your central nervous system function in a few different ways.

One of those is extreme fatigue, which affects as many as 76 percent of people with advanced Lyme disease, according to research. Trouble concentrating, loss of coordination, and short-term memory loss are other possible problems, occurring in up to 24 percent of people. In extreme cases where the disease is left untreated for extended periods, you might even develop facial weakness and behavioral changes, Sellati says.

The same inflammation that causes fatigue and fuzzy thinking can also lead to headaches, which findings suggest could strike in up to 70 percent of people with Lyme disease.

Usually, these feel intense and more similar to a migraine than your run of the mill tension headache, Dr. Bhayani says. In addition to throbbing pain, you might also experience hypersensitivity to noise or light.

Severe pain, numbness, or tingling in your joints and muscles

Around 60 percent of patients will develop joint pain or even arthritis as their Lyme disease progresses, according to a Johns Hopkins University School of Medicine study. Usually, it starts in the joints closest to where you were bitten and can spread from there, especially to areas like the knees. The pain isn’t usually constant, though. Experts don’t fully understand why, but “the symptoms can wax and wane over a period of weeks or months,” Sellati says.

Over time, the disease can attack the cartilage in the joints and lead to tissue damage, says Linda Yancey, MD, an infectious disease specialist with Memorial Hermann Katy Hospital in Katy, TX.

Like many of the other problems caused by Lyme disease, this one is also triggered by inflammation. “The damage to tissues, bone, and cartilage is caused by the production of pro-inflammatory proteins, the same protein responsible for damage caused by rheumatoid arthritis,” Sellati says.

In addition to invading the central nervous system, Borrelia burgdorferi can make its way into heart tissue. That can cause the tissue to become inflamed, leading to heart palpitations, Sellati explains. It might feel like your heart is pounding, fluttering, or beating faster than usual. Usually, it becomes more noticeable with vigorous exercise or stress. The problem isn’t all that common, affecting only around 11 percent of patients. Still, it can be serious. “If [palpitations] occur frequently, seem to get worse, or are accompanied by chest pain, fainting, severe shortness of breath, or dizziness, you should seek immediate medical attention,” Sellati says.

One thing to note: Generally, shortness of breath is most likely to strike when you’re exerting yourself, but with Lyme that isn’t always the case. “A Lyme disease patient can experience shortness of breath during normal activity that in the past might not have resulted in this response,” Sellati explains.

⚠️ If you notice symptoms of Lyme disease, call your doctor right away

Lyme disease treatment: Your doctor should refer you to an infectious disease specialist, who can evaluate your symptoms and decide whether you need testing, Dr. Yancey says. If you test positive, you’ll be given antibiotics to fight the infection.

False-negatives: If your test comes back clean, but you’re convinced that Lyme disease is the culprit, ask to be retested. False negatives are common early on since it takes a few weeks for your immune system to build up antibodies to the bacteria.

This article has some good information mixed in with some very bad information.  The article states as up to 80% have the “classic” bullseye rash.  Hogwash.  ILADS states fewer than 50% see a tick bite or a rash:  http://www.ilads.org/lyme/about-lyme.php  Hardly anyone I work with has seen either.

As to the appearance of any rash that might occur:  “This emphasis on target-like lesions may have inadvertently contributed to an underappreciation for atypical skin lesions caused by Lyme disease.” — Some Visible Signs of Lyme Disease Are Easily Missed or Mistaken, Science Daily, Apr 22, 2013 https://www.sciencedaily.com/releases/2013/04/130422132507.htm?utm_source=feedburner&utm_medium=email&utm_campaign=Feed%3A+sciencedaily%2Fhealth_medicine%2Flyme_disease+%28ScienceDaily%3A+Health+%26+Medicine+News+–+Lyme+Disease%29

As to flu-like symptoms, a case of a little girl outside playing got bit by a tick and within about 6 hours couldn’t walk or talk.  She never got flu-like symptoms but quickly advanced to late stage symptoms WITHIN HOURS:  https://madisonarealymesupportgroup.com/2016/12/07/igenex-presentation/  All my initial symptoms were gynecological:  https://madisonarealymesupportgroup.com/2017/02/24/pcos-lyme-my-story/

Again, as to “Later Lyme Disease Symptoms,” people can jump from one stage to another quickly – within hours and seemingly bypass certain stages.  This is an important detail that if practitioners aren’t aware of, will dismiss patients entirely if they don’t present initially with a bullseye rash and flu-like symptoms.  The little girl’s case I mention is a prime example.  Regular doctors dismissed her entirely.  They rushed her to Dr. Jones, a well-known, respected, and experienced doctor with tick borne illness.  After the treatment he gave, the girl was right as rain.  I cringe when I consider the alternative.  She would join the increasing ranks of “Chronically infected” patients.

The article again, states “larger or additional rashes,” in this category but many fail to have any, ever.

I am thankful the article mentions heart issues, pain, numbness, tingling, dizziness, shortness of breath, and headaches as these are symptoms many experience.  What they fail to mention is the involvement of other pathogens that could cause these very same symptoms and require different medications.

I’m also thankful they state to call your doctor right away.  Here’s the problem.  Most doctors don’t know what they hell they are doing and infectious disease “specialists” are often the worst offenders!  They are believing, regurgitating, and following the same ancient mythical advice that’s been going around like a bad case of the flu for over 40 years!  Don’t waste your time and money on these folks.  Contact your local lyme support group for Lyme literate physicians trained by ILADS.  Please point regular practitioners to this:  https://madisonarealymesupportgroup.com/2018/06/06/lyme-education-for-healthcare-professionals/ and https://madisonarealymesupportgroup.com/2018/02/19/calling-all-doctors-please-become-educated-regarding-tick-borne-illness-heres-how/

Case in point:  They state that those who get treated promptly fare much better, yet the video within the article (go to link) states to take a “wait and see” approach.  In other words, you get bit, and then you just wait around on pins and needles to SEE if you experience symptoms.  Anyone else out there see the Russian Roulette approach here?  It’s a damned if you do, damned if you don’t scenario, with you losing in the end.

Each and every tick bite needs to be taken as seriously as a heart attack and treated, in my opinion.  Why risk it?  As a patient and advocate who’s infected as well as her husband, and has spent over $120K out of pocket for over 4.5 years of treatment and needing to regularly maintain this health, I can attest to how this illness(es) can take everything you own and have.  It will rock your world like nothing else. The official ILADS word on this is that there IS NO black and white answer as to treating a tick bite prophylactically but if you live in an endemic area (as I do) you should definitely consider it because a high percentage of ticks are infected.  They also state IF you decide to be treated, it should be for NO LESS than 3 weeks.  This treatment will prevent the body from mounting an antibody response, which means subsequent testing for Lyme WILL BE NEGATIVE.  To which I say, what does that matter if you become sicker than a dog?  TREAT THIS SUCKER AND TREAT IT NOW!  http://www.ilads.org/lyme/what-to-do-if-bit-by-tick.php

If you are unfamiliar with what appropriate Lyme treatment looks like:  https://madisonarealymesupportgroup.com/2016/02/13/lyme-disease-treatment/

You can type the other pathogens into the search bar for their treatments.  (i.e. Babesia, Bartonella, Mycoplasma, Viruses, etc)

ECU Researcher Gets Money From NIH to Develop Medication for Lyme