“I want to make it perfectly clear. We’re leaving here today. Dad’s picking the child up and he’s going to be vaccinated regardless of what Mom did or didn’t do.”

These were the words of Oakland County judge Karen McDonald during the open minutes of the recent court room proceedings that continue to grab international headlines. Metro Detroit’s Rebecca Bredow, the Mom, now sits in an Oakland Country jail with a criminal record forever attached to her name. Her 9-year-old son is now in temporary custody of his father who is ordered by the court to bring the child up to date on the boy’s vaccination status, which will be up to eight vaccines “…as rapidly as medically necessary.”

Unfortunately in America, the end result of cases like Bredow’s are becoming more and more common.

Some are saying Bredow refused to vaccinate her child and is getting what she deserved but is it really that simple? The mainstream, corporate media narrative is attempting to paint a picture that Bredow’s case is an uncommon, one-and-done occurrence. The narrative is also suggesting that the family court process, when vaccination status is concerned, is a stone solid justice machine based on ‘settled vaccine science.’ The reality is that the judge and the court are taking a known and dangerous medical risk with another person’s child that they have no right to take. Do courts have the right to order an unavoidably unsafe medical intervention like vaccination in custody cases?

Joel Dorfman of Michigan for Vaccine Choice, a group that advocates for parents’ rights to refuse vaccines told the Detroit Free Press, “If this child is injured as a result of being given eight immunizations, who do you think is going to take care of the child? The judge?”

According to Judge McDonald, Bredow’s case is about her refusal to follow court orders she previously agreed to. McDonald ruled Bredow was in criminal contempt for not following a 2016 agreement to vaccinate her child. However Bredow says that her attorney at the time signed the order and advised her not to worry since she had filed state waivers and vaccine exemptions each year in Michigan for her child. In Michigan, parents or guardians of children enrolled in public and private schools are required to attend an educational session before they are granted waivers. 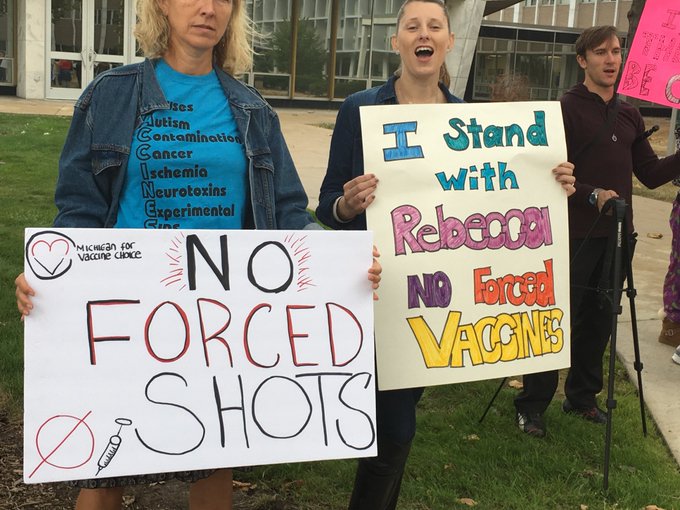 Mom goes to jail for not vaccinating her kid. But what is this case really about? On @FOX2News – @WWJ950

Lecturing from the bench, Judge McDonald told Bredow “I understand you love your children. But what I don’t think you understand is that your son has two parents, and dad gets a say,” Her statement seems reasonable yet it is important to note that Bredow has primary caregiver status. Digging deeper into the information of the case, Judge McDonald’s recent ruling gives physical custody of the child to the ex-husband James Horne. In the past, Child Protective Services did an investigation on Horne and the case was confirmed as a Category 3 revealing a preponderance of evidence against him which the court knew about.

What about medical expert testimony? Although Bredow’s case didn’t involve the testimony of an expert witness or medical professional, this tactic is often a nonstarter in US courts. The courts don’t decide and rule on the science, their job is to weigh the evidence. For each doctor or expert witness brave enough to go on record against the safety of vaccines in a given case, there are many more doctors who are will testify for them. In addition, all US health agencies and organizations still toe the line for the false ‘safe and effective’ vaccine narrative and refuse to factor in any new or highly relevant information that says otherwise.

During the recent ruling, Judge McDonald appeared to be reading from a prewritten statement when handing down her decision suggesting that she did not factor in the day’s testimony and dialogue. If that is the case, perhaps McDonald’s prewritten decision was in response to the attention Bredow drew to the case by going to the media. Section 600.1715 of Michigan’s Revised Judicature Act of 1961 states:

The “act or duty” to vaccinate Bredow’s 9-year-old child was ordered by the court to be done by the ex-husband. In addition, Bredow no longer had the power to perform the act or duty in question. It seems that, given the language of the act, Bredow’s jail time was handed down as a warning and a lesson rather than a necessary legal measure.

Jefferey Jaxen is a researcher, independent investigative journalist, writer and voice for health freedom on the front lines of society’s shift towards higher consciousness.  Visit his website here to learn more.

This work is reproduced and distributed with the permission of GreenMedInfo LLC. Want to learn more from GreenMedInfo? Sign up for the newsletter here http://www.greenmedinfo.com/greenmed/newsletter.”

Disclaimer: This article is not intended to provide medical advice, diagnosis or treatment. Views expressed here do not necessarily reflect those of GreenMedInfo or its staff.

Regardless of your opinion on vaccinations, this story should trouble you.  More and more medical decisions are being made by “authorities” who aren’t the parents.  This is why I support the Parental Rights Amendment – an amendment to our Constitution giving parents their rights back.

The injustice and abuse against Lyme/MSIDS patients is unbelievable.

For more on the Parental Rights Amendment:  https://madisonarealymesupportgroup.com/2017/04/20/why-we-need-the-parental-rights-amendment/

Comments Off on Refusal to Vaccinate Child Gets Mom Jail Time: A Deeper Analysis