[#MeAgain] New Beginnings: How Nicole Williams Overcame Lyme and Began a Journey to Start a Family

Born and raised in Southern California, ticks weren’t on Nicole Williams’ radar while growing up. Though she was an adventurous person — traveling, exploring, and studying abroad when she could — she didn’t spend much time in wooded areas, so tick-borne diseases like Lyme disease weren’t a cause for concern.

In 2014, Nicole decided to move to Nashville, Tennessee, excited about the new possibilities and opportunities that awaited her. But eight months into her stay, she began to experience a range of unusual symptoms: brain fog, joint and nerve pain, and memory problems were just some of the issues she dealt with. As a travel writer and editor, she also noticed her ability to articulate words began to diminish, and she was having trouble getting out of bed some days. 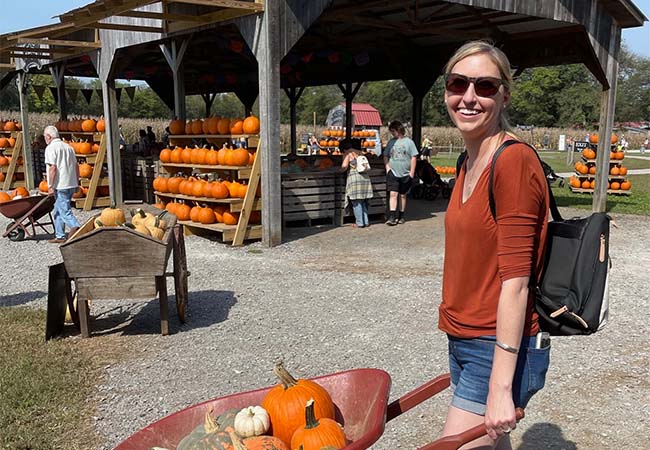 In search of answers, Nicole saw doctor after doctor, but they didn’t know what was wrong with her. With the ongoing, supportive help of her mother and the suggestion of a family friend, she was tested for Lyme disease and received a positive result.

Over the next several years, Nicole embarked on an epic journey to regain her health and her life. Here, she shares the healing story of hope and perseverance, her road to natural and herbal therapies, and finally, to marriage, pregnancy, and beginning her family.

► I was trying to find an answer, and my mom had a friend back in California who lived in the neighborhood that she would often run into on walks. They struck up a kind of friendship and would have conversations. This woman suffered for many years with Lyme disease, and every time my mom would tell her about me, she said to my mom, “I think she should get tested for Lyme.” And so, it was my mom who was really championing this, “I think you need to get tested for Lyme disease.”

► I struggled with it because I thought, “No, I don’t have Lyme. I’ve never been bitten by a tick. I’ve never really been a woodsy person.” I like adventure, but I don’t go camping. I didn’t think that I had it. But my mom had heard this woman’s story and told me that she’d had it her whole life.

For me, that was the kiss of death — if I got diagnosed with Lyme disease, and it’s a lifelong battle. I didn’t want to hear that. I was hoping for some other diagnosis.

► I asked an orthopedic doctor I was seeing in Tennessee if I should have [a Lyme test], and he said, “You know that there’s no Lyme disease here.” But we finally did it, and that test came back negative.

Then, I was in California, and I had a doctor agree to run the test again, and that one came back positive — and this was just the standard lab test. With the positive test, we said, “Okay, now we know what we’re dealing with.” We assumed, based on that positive test result and my clinical symptoms, that I had Lyme disease. That doctor put me on the standard course of doxycycline and said, “Alright, here’s 30 days of antibiotics, and you’ll be fine.” Then, we started researching Lyme-literate doctors in my area. 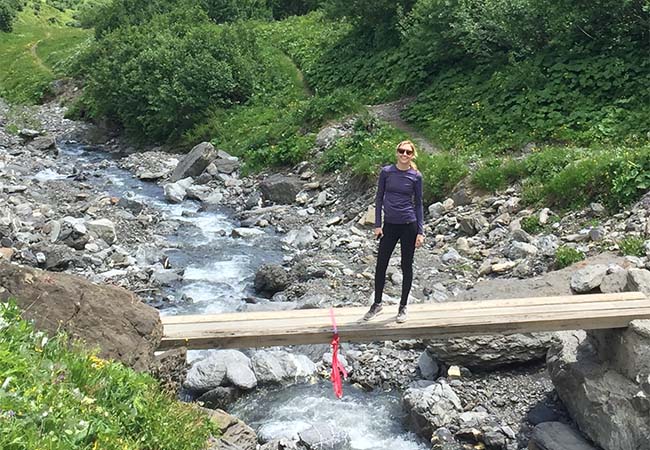 ► I found an LLMD near Nashville and started going to him, and he had me on a cocktail of different antibiotics. I did intravenous UV light therapy because I also had Epstein-Barr. I was on a whole course of all these different meds, and at the time, I thought I was tolerating it all pretty well. He was a proponent of diet as well; I didn’t really believe that the diet would be the answer.

But when I was on all the antibiotics, I cut back on alcohol; I cut back on sugar because I had read that the microbes feed off sugar; I cut out dairy because dairy could counteract some of the antibiotics. So in my head, I had justified a couple of dietary changes to try to increase my chances of treatment working.

But one night, I got up in the middle of the night and had to use the bathroom, and I passed out. I had a display of all the meds I was on, and I had my little pill organizer, and I actually passed out on them. I took that as a sign to say, “I’m done. This is too much. I’m taking too much. I’m overwhelming my body.” I felt some improvement, so I decided to stop the meds.

► When I stopped treatment, I added all the stuff back into my diet that I had cut out. I thought, “Well, it doesn’t matter now — I’ll have a little bit of sugar,” and everything came back with a vengeance. My symptoms worsened, and I realized there was more to this — how I eat and what I put in my body — than I wanted to admit initially. One day, I woke up and thought, “Alright. No sugar. No dairy. No soy, corn, or gluten.” I went on a full anti-inflammatory diet, which was really hard.

Through this whole experience, my mom was my biggest advocate, but she also took the brunt of a lot of my pain because I was never ready to hear, “Okay, what’s next? What you’re doing has stopped working. You need to take it to the next level.”

It was actually my mom who stumbled on Dr. Rawls on Facebook. Something came up about one of his webinars. We watched one, and we both ended up reading his book (Unlocking Lyme), but I still waited a long time before starting the herbal protocol. I wasn’t ready to commit to that next thing financially. I just wasn’t there yet.

Then, my now husband proposed, and we were planning our wedding. I wanted to see if herbs could take me to my wedding day feeling more like myself. I was already doing well with the diet, and I was completely homeopathic at that point. I felt good about it because I was giving my body what it needed to be healthy. 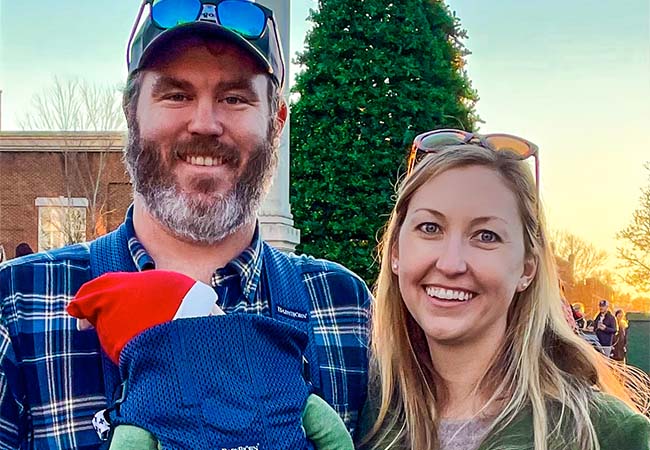 I did a consult in January of 2018, and I jumped right in. I did one pill of each for a week and then two pills of each for the next week, and then I was on the full dose and tolerating them well. I started seeing improvements pretty quickly. My wedding was in April of 2018, and I did reach my goal of feeling good on my wedding day. For almost three years, I took full doses of the herbs and knew they were working.

► Now, we’ve been married three years. About the two-year mark, we knew things with us were good — and of course, the pandemic happened. But we were both working from home, and we were spending more time together. It felt like the right time for us as a family to talk about having kids. It was a fear of mine that I could pass [Lyme] onto my child. How would I feel if my child was sick because of me?

In November of 2020, I did a consult with Dr. Rawls, and with his history of being an OB, I was curious to hear what he had to say. He gave me a lot of confidence in where I had come in my journey. If you truly believe that chronic illness is an immune dysfunction, there’s not one thing that makes you ill. It’s multiple things: toxins in your environment, toxins in your food, stress, lack of sleep. Why not find harmony with the microbes and find a way to feel better because you’re not going to get rid of them completely?

That was sort of my thought process with procreating: I’ve learned so much about my body and about wellness, well-being, health, food, toxins in my environment and the products I use, and I thought, “If I can take that and apply that to a major life event like a pregnancy or how I raise my child, I’ll feel more equipped to handle whatever comes up in the future.”

In December of 2020, I conceived our son. I decided I was going to stop the herbs and see how my body does, and worst-case scenario, if I need to add them back in postpartum, I will. But I’ve made sure to keep a very clean diet. The pregnancy hormones were wonderful, and I was just really conscious of how I managed my health through the pregnancy. 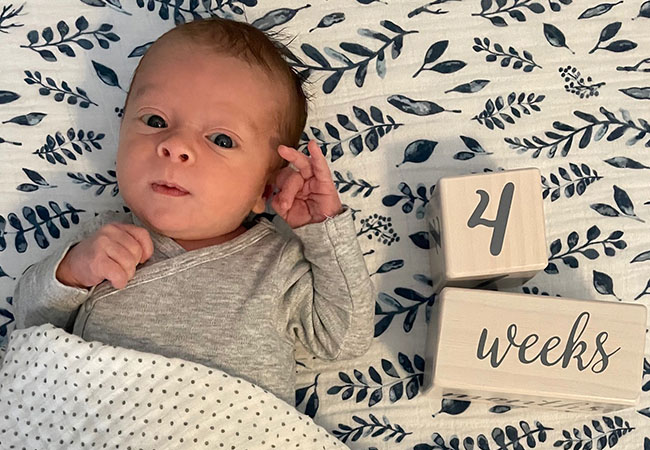 In September of 2021, I gave birth to our son Jacob. I wanted to be as natural as I could, so I ended up doing an unmedicated birth. That was a true test of my strength, and I had a really smooth birth. I’m still feeling good to this day — minus a flareup at 10 weeks postpartum. I haven’t added the herbs back yet since I’m breastfeeding, but I take Epsom salts baths and detox as much as possible, but I don’t want to do too much because of breastfeeding.

For me, the takeaway with all of this is that [Lyme] doesn’t go away. I struggled with that for years while I was sick, thinking that this would be my forever, but I’ve found peace with it. I have bad days, but they do pass, and I learned from them and appreciate the good days more.

► Looking back, I’m thankful for what I went through because I learned so much in the process. I learned how to be an advocate for myself. I know how to be an advocate for a child. One of my fears was, what if I feel terrible those nine months of pregnancy? How am I going to get through it? But I feel like I learned much more about my body and how to stay healthy in ways that I’m appreciative of now. As a new mom, I now have the tools to get better if a relapse were to happen to me. I know what works. I know what to do, and it’s a constant journey.

Comments Off on [#MeAgain] New Beginnings: How Nicole Williams Overcame Lyme and Began a Journey to Start a Family