Why Are We Suddenly Rejecting Science By Forcing Vaccines on Absolutely Everyone? Asks The Hill’s Kim Iverson

Why Are ‘We Suddenly Rejecting Science by Forcing Vaccines on Absolutely Everyone’? Asks The Hill’s Kim Iverson

Political commentator Kim Iverson says conventional science has always favored natural immunity when it comes to longer lasting and stronger protection against infection — so why are we now “suddenly rejecting science by forcing vaccines on absolutely everyone?” 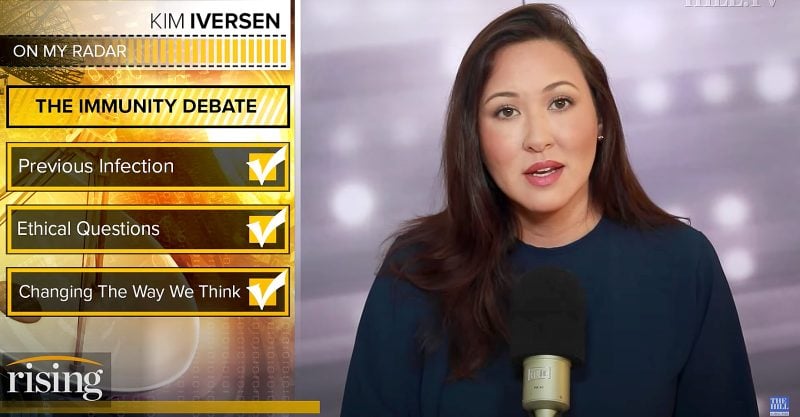 But as political commentator Kim Iverson points out on The Hill’s “Rising,” these new findings aren’t really “bombshell” at all.

Conventional science, she says, has always shown that past infection provides “robust immunity” against future reinfections.

“Why suddenly, after over 100 years of recognizing previous infection as a robust form of immunity,” Iverson asks, “are we suddenly rejecting science by forcing vaccines on absolutely everyone?”

In the largest real-world observational study, conducted in Israel — one of the most highly vaccinated countries in the world — scientists followed 700,000 people, splitting them into three groups: vaccinated people who received two doses of the Pfizer jab, unvaccinated people who recovered from COVID, and individuals who both recovered from the virus and received one dose the Pfizer vaccine.

“The researchers hypothesize that it’s because of B and T cell memory,” Iverson explained. “And the fact that people who recovered from the virus are exposed to the entire virus, not just the spike protein that the vaccines expose the body to.”

The study is yet to be peer-reviewed, she said, but the findings are consistent with other studies and public health data.

“For some strange, politicized reason,” said Iverson, “this scientific fact has been hotly debated in the U.S.”

For example, she explains:

“In the incidence of chickenpox, the Centers for Disease Control and Prevention (CDC) recommends vaccination for those who haven’t had a previous infection. On their website, under the heading, ‘Who needs a chickenpox vaccine?’ the CDC says: ‘People 13 years of age and older who have never had chickenpox or received chickenpox vaccine should get two doses, at least 28 days apart.’

“Same thing for the measles, and even polio, if they are not combined with other vaccines. Even during the smallpox outbreak, when vaccines became mandated, the certificate of immunity clearly gives clearance for those who had previously recovered from smallpox.”

So, Iverson asks, why are world health officials ignoring the science of natural immunity?

“In the European Union, where some countries have implemented vaccine passports, people can obtain one by either showing proof of vaccination, testing negative for the virus within 72 hours, or through proof of recovery from previous infection.

“This is based on sound science. So, what is it that is causing this sudden rejection of widely accepted science here in the United States?

“When recovered patients raise an eyebrow over policies mandating  they be vaccinated, their education, their livelihoods and their ability to participate in society are threatened.”

For example, Jeanna Norris, a supervisory administrative associate and fiscal officer at Michigan State University, who has natural immunity after recovering from the virus, sued the school over its vaccine mandate.

A judge, however, ruled against Norris on Tuesday, arguing that:

“… because Plaintiff does not have a constitutionally protected property interest in her employment position at MSU, and is not being denied any constitutional rights under the Fourteenth Amendment, nor is employment a fundamental right under the United States Constitution, this matter will receive rational basis scrutiny…

“And for Plaintiff to win under this standard of review, Plaintiff must show that MSU’s vaccine mandate is not rationally related to a legitimate governmental interest, i.e., the health and safety of the public. Plaintiff is unlikely to win under rational basis review. Therefore, at this stage, Plaintiff has not shown a substantial likelihood of success on the merits.”

Zywicki argued that because he has natural immunity, “there’s no justification for a coercive violation of my bodily autonomy.” The university caved to the suit, awarding Zywicki the exemption last month.

As Iverson points out, the new data on natural immunity raises a “huge ethical question” about the demand to vaccinate the world, regardless of their previous infection status.

“The CDC estimates that over a third of all Americans have recovered from COVID. That means if the vaccines can even help us reach herd immunity, we only need 50% vaccinated to get us to a combined 80%.

“Currently the U.S. is reporting just over 55% fully vaccinated, but it would be interesting to know how many of those were previously infected in order to give us a true picture of how close we are to this believed threshold for herd immunity.

“This would be important data for us to know in order for us to find out if herd immunity is even possible with this virus.”

“They have not politicized the virus,” she said. “They’re able to give better insights into what’s working and what isn’t.”

Iverson said she hopes this latest study showing natural immunity is the best protection will “finally change our current line of thinking.”

She makes clear no one is advocating for people to go out and get COVID. But the reality, she says, is that millions of people already had the virus, and many more will.

“The people who have recovered have robust immunity,” Iverson said. “That should be accepted, even studied by our society, as it always has, rather than shunned.”

Comments Off on Why Are We Suddenly Rejecting Science By Forcing Vaccines on Absolutely Everyone? Asks The Hill’s Kim Iverson

Medical Kidnapping As Patients Sacrified on the COVID Altar