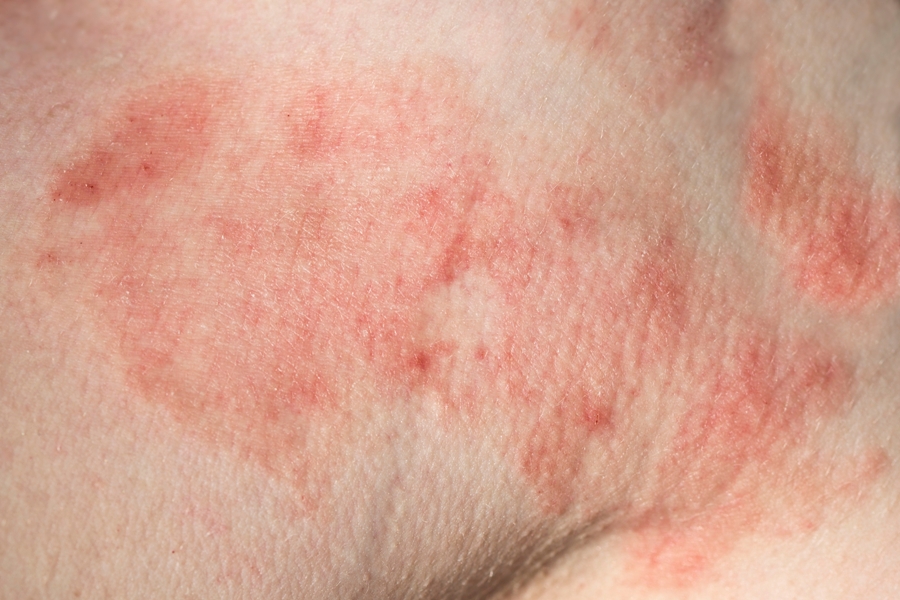 Lyme disease can cause an atypical skin rash that may be mistakenly attributed to another illness, as this case report demonstrates. In their article, Suzuki and colleagues describe a 43-year-old woman who developed a rash which puzzled doctors and led to several misdiagnoses before Lyme disease was correctly identified.


Lyme disease can cause an atypical skin rash, which may be overlooked by clinicians. In this case report, a 43-year-old woman, who was an avid gardener and lived in Wisconsin, developed pink papules behind her right knee.1  Over the next several days, the rash “evolved into painless vesicles with surrounding faint erythema.” She also developed fever, chills, neck pain and malaise.

Doctors initially suspected shingles (Herpes Zoster) but treatment with valacyclovir, an antiviral medication, did not improve the skin rash or symptoms. “The blisters increased in size and showed purple discoloration,” the authors wrote.

The doctors then diagnosed her with cellulitis, a bacterial skin infection which also causes a skin rash. She was prescribed ceftriaxone, followed by cephalexin and trimethoprim-sulfamethoxazole. But the woman remained ill.

She was then referred for evaluation for suspected necrotizing fasciitis, an inflammation of the vessel walls.  At this time, she had a fever of 101.3°F.

“The atypical appearance of skin rash might confuse physicians with many differential diagnoses, such as spider bite, herpes zoster, bullous cellulitis, necrotizing fasciitis, and so on.”

“Physical examination showed blister and a surrounding round erythematous patch at the right popliteal fossa and right inguinal lymphadenopathy,” the authors wrote.

The woman was diagnosed clinically with “early Lyme disease with bullous erythema migrans.”

“Given the season, geographic location, outdoor activity, and progression despite treatment for cellulitis and shingles, she was clinically diagnosed with early Lyme disease,” the authors report.

The woman was treated for Lyme disease with a 10-day course of doxycycline and her skin rash resolved.

“The atypical appearance of skin rash might confuse physicians with many differential diagnoses, such as spider bite, herpes zoster, bullous cellulitis, necrotizing fasciitis, and so on,” the authors point out.

Editor’s comments:  I have seen rashes described in this article in my Lyme disease patients. I am concerned when a patient is diagnosed with shingles, cellulitis or necrotizing vasculitis before Lyme disease is considered as a possible cause of an atypical skin rash.

If uncertain about the root cause of the rash, I will typically treat patients with a combination of medications including an antiviral agent and an antibiotic that is effective in treating cellulitis, a spider bite and Lyme disease.

Everyone knows that delayed treatment for Lyme/MSIDS is causing chronic/persistent symptoms, yet it continually appears doctors would rather diagnose patients with anything other than Lyme/MSIDS.  It’s almost like they want to run through a litany of other causes first, treat for those, and finally if nothing works throw up the white flat and admit it’s tick-borne illness.

Please remember that those getting the rash is highly variable and certainly not a sure thing.  If you get it, it is diagnostic for Lyme – no testing needed; however, if you don’t get it, you can still be infected: