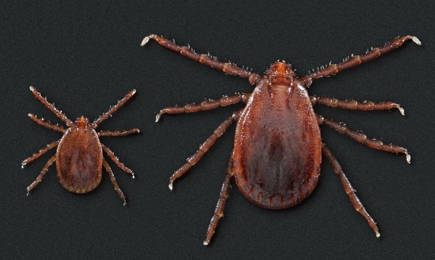 RALEIGH — A new breed of tick has been found in Surry County and could be to blame for the deaths of five cows this year.

The N.C. Department of Agriculture and Consumer Services issued a press release late Monday warning of the dangers of a relatively new species of the parasites: the Asian longhorned tick.

“State Veterinarian Doug Meckes is reminding livestock and pet owners to be vigilant in their tick preventative measures during warm weather,” stated a news release from Andrea Ashby, director of the department’s public affairs division.

“Recently, the deaths of five cows in Surry County were linked to acute anemia caused by tick infestations. Samples were sent to the N.C. Division of Public Health, Communicable Disease Branch for identification which confirmed Asian longhorned ticks.”

“This is the fourth confirmed case in North Carolina since 2018, and the first case reported this year. Previous cases were found in Polk, Rutherford and Davidson counties,” Meckes said. ‘The deceased young bull brought to our Northwestern Animal Disease Diagnostic Lab had more than 1,000 ticks on it and the owner had lost four other cattle under the same circumstances.”

The first case of the East Asia species identified in the U.S. was in West Virginia from a specimen taken from a white-tail deer in August 2010. Since then, 67 counties in the United States have confirmed local Asian longhorned tick populations. Virginia has the most counties with 24 confirmed.

“It is a serious pest of livestock in its native regions,” said the news release. “It is an aggressive biter and frequently builds intense infestations on animals causing great stress, reduced growth and production, and blood loss. The tick can reproduce parthenogenetically (without a male) and a single fed female tick can create a localized population.”

The Department of Agriculture made sure to point out that the tick has not been linked to any infections in humans in the U.S. at this point.

“The N.C. Division of Public Health, Communicable Disease Branch is working with NCDA&CS to understand its distribution and monitor for diseases it may carry. The finding of this tick in the state corresponds with a continued effort by the N.C. Department of Health and Human Services to identify ticks in all 100 counties of the state. Veterinarians are encouraged to submit ticks they find on clinical patients to help track and identify tick populations in North Carolina.”

Practicing vets interested in participating in this study are encouraged to email Dr. Alexis M. Barbarin at NCTickID@dhhs.nc.gov.

“Protect yourself while outdoors by wearing long clothing, wearing permethrin-treated clothing, and using DEET, picaridin, and other EPA-approved repellents. It is also good practice to shower immediately once you return home. Checking for ticks can help deter tick attachment or allow for early removal. For domestic animals, talk to your veterinarian about effective options to treat your pets and livestock for ticks.”

If you believe you have located an Asian longhorned tick, the CDC encourages you to carefully remove the tick from the person or animal as quickly as possible. After placing the ticks in rubbing alcohol in a jar or a ziplock bag, the CDC says to take the following steps:

• Contact your health department about steps you can take to prevent tick bites and tickborne diseases.

• Contact a veterinarian for information about how to protect pets from ticks and tick bites.

• Contact your state agriculture department or local agricultural extension office about ticks on livestock or for tick identification.”

In regards to the impact of these ticks on humans, the CDC reported that, “In other countries, bites from these ticks can make people and animals seriously ill. As of June 24, 2019, no harmful germs that can infect people have been found in the ticks collected in the United States. Research is ongoing.”

The most common symptoms of tick-related illnesses according to the CDC are:

• Fever/chills: With all tickborne diseases, patients can experience fever at varying degrees and time of onset.

• Aches and pains: Tickborne disease symptoms include headache, fatigue and muscle aches. With Lyme disease you may also experience joint pain. The severity and time of onset of these symptoms can depend on the disease and the patient’s personal tolerance level.

In Lyme disease, the rash may appear within 3-30 days, typically before the onset of fever. The Lyme disease rash is the first sign of infection and is usually a circular rash called erythema migrans or EM. This rash occurs in approximately 70-80% of infected persons and begins at the site of a tick bite. It may be warm, but is not usually painful. Some patients develop additional EM lesions in other areas of the body several days later.

The rash of (STARI) is nearly identical to that of Lyme disease, with a red, expanding “bulls eye” lesion that develops around the site of a lone star tick bite. Unlike Lyme disease, STARI has not been linked to any arthritic or neurologic symptoms.

The rash seen with Rocky Mountain spotted fever (RMSF) varies greatly from person to person in appearance, location, and time of onset. About 10% of people with RMSF never develop a rash. Most often, the rash begins 2-5 days after the onset of fever as small, flat, pink, non-itchy spots (macules) on the wrists, forearms, and ankles and spreads to the trunk. It sometimes involves the palms and soles. The red to purple, spotted (petechial) rash of RMSF is usually not seen until the sixth day or later after onset of symptoms and occurs in 35-60% of patients with the infection.

• In the most common form of tularemia, a skin ulcer appears at the site where the organism entered the body. The ulcer is accompanied by swelling of regional lymph glands, usually in the armpit or groin.

In about 30% of patients (and up to 60% of children), ehrlichiosis, a bacterial infection, can cause a rash. The appearance of the rash ranges from macular to maculopapular to petechial, and may appear after the onset of fever.”

The Asian Long-horned tick is a formidable foe: https://madisonarealymesupportgroup.com/2018/09/12/three-surprising-things-i-learned-about-asian-longhorned-ticks-the-tick-guy-tom-mather/

At last count, the tick has been found in 11 states.

Please remember, the rash authorities want to state happens to so many people, actually only happens to 25-80% and in many not at all.

Another Propaganda Paper By Auwaerter – More Conflicts of Interest