Medical Thriller About a Government Cover-Up

Medical Thriller About a Government Cover-Up

Were Lyme ticks really considered for use as bioweapons by the U.S.? 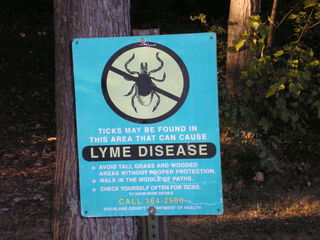 Being a skeptic about most claims of government conspiracies, I began reading Bitten: The Secret History of Lyme Disease and Biological Weapons, by Kris Newby, with extra care. I paid especially close attention to Newby’s caveats and endnotes. Eventually, I grew to believe I could trust that she had used due diligence in researching and writing this book.

Her analysis needs to be taken seriously.

In short, Newby posits that the government of the United States, specifically its biological weapons program during the Cold War, experimented on ticks and other little beasties in order to learn the most efficient way to spread horrific disease among an enemy’s population, both military and civilian.

Newby, an award-winning science writer at Stanford University and the senior producer of the Lyme disease documentary, Under Our Skin, interviewed biosecurity experts and microbiologists doing cutting-edge research. One of her most crucial sets of interviews was with Willy Burgdorfer, the man who discovered the microbe behind Lyme.

Burgdorfer was open with Newby about his formerly secret role in developing bug-borne biological weapons during the Cold War. He freely admitted to opening up and adding other “bugs” to a vast number of imported ticks to try to make them more lethal and misery-causing. He told her he suspected that one of these military experiments may have gone wrong, perhaps releasing a batch of these super ticks into the countryside.

Burgdorger hinted to Newby that he realized eventually that what he had been doing was not a good thing. She states she wrote this book in hopes that a whistle-blower will come forward with more information.

Meanwhile, it appears that many in the medical community do not know exactly what they are dealing with. They have been known to use unreliable tests when patients show signs of chronic Lyme disease, and they do not make correct diagnoses. Newby and her husband were once bitten by ticks and, though it took 10 doctors and many years, they eventually got the necessary treatment.

I have a good friend who suffers greatly from the ravages of chronic Lyme disease, as do her now-grown children. It took decades before a correct diagnosis was arrived at, and by then, serious complications had set in. Her son, now virtually bedbound, apparently got the disease during his birth and, as yet, no cure has been found for him. The lives of my friend, her children, and millions of other Americans continue to be thoroughly compromised.

I’m not a medical doctor, nor am I personally involved in the Lyme community, but I know a fascinating topic and a very readable and credible book when I read it. I highly recommend you read Bitten and judge for yourself.

Susan K. Perry, Ph.D., is a social psychologist and author.

Comments Off on Medical Thriller About a Government Cover-Up

UK Woman Isolated, Pumped Full of Anti-psychotics, & Told It’s ‘All in Her Head’ Until Finally Diagnosed With Lyme