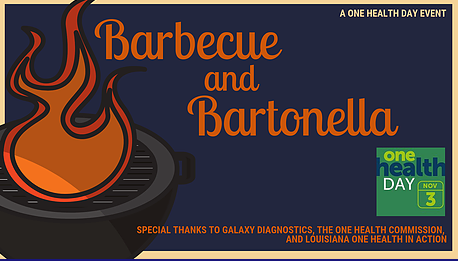 Galaxy Diagnostics, the One Health Commission, Louisiana One Health in Action (LOHA), and the One Health Student Club at Tulane partnered to present an educational “Barbecue and Bartonella” event for medical students, veterinarians, public health faculty, and other interested parties on March 28th 2019 at the Tulane School of Public Health. Approximately 70 attendees gathered to raise awareness of bartonellosis and discuss the impact of a one health approach to medicine.

The event included an excerpt from our medical education webinar, Understanding Bartonella. Also LOHA founder, Amy LeBoeuf, shared her son’s medical journey. In her presentation, Amy discussed the severity of his symptoms, the complexity of his treatment, and the overwhelming amount of testing that he has faced over the years.

Like many patients facing chronic illnesses, he saw more than 30 doctors in 19 different specialties. A variety of autoimmune diseases were considered, including lupus, fibromyalgia, and complex regional pain syndrome, before an accurate diagnosis was made.

A key factor in the correct diagnosis and treatment was when Amy discovered that a cat scratch had occurred prior to the onset of symptoms.

“It is imperative that we develop a different approach in the medical community,” says Amy LeBoeuf, founder of Louisiana One Health in Action, “because not everyone that becomes ill has the same host response to these pathogens, which make it easy to mistake for other diagnoses.”

LOHA is a community of advocates dedicated to spreading the one health initiative at a community level and providing opportunities for awareness and education. Along with this event, they also organized a “Beating Bartonella” color run that Galaxy Diagnostics co-sponsored in October. If you would like to learn more about the organization and their events, please visit their page here.

As a social venture and a One Health company, Galaxy Diagnostics is passionate about protecting the animal-human bond through the surveillance, prevention and clinical management of flea- and tick-borne diseases shared by people and animals. Not only do we offer the best possible molecular and serology test options available, but we work with researchers and clinicians to generate new knowledge about emerging infectious diseases such as bartonellosis, Lyme borreliosis and other vector-borne diseases. Based on our scientific expertise, we are able to provide counsel to clinicians and researchers dedicated to achieving the most accurate diagnosis possible for their patients. Our mission is reflected in our corporate values, clinical service offerings, and everyday interaction with patients, clinicians and researchers.

Any forward progress regarding Bartonella is pretty much due to the efforts of one man – Dr. Breitschwerdt (veterinarian). Like other researchers truly undertaking research that helps Lyme/MSIDS patients, he’s heavily vested.

The love he had for his dad is palpable – even in a scientific article.  Excerpt:

Potentially, his illness illustrates a complex interaction between intravascular Bartonella infection and complex disease expression, provides documentation for an as yet uncharacterized zoonotic rodent Bartonella sp., and offers disconcerting evidence supporting antimicrobial drug ineffectiveness and clinical evidence supporting the concept that persistent infection with >1 Bartonella spp. may lead to immunosuppression and opportunistic infections with organisms such as herpes zoster and C. albicans. As in his life, Dad would want this story to benefit others after his death. We hope that it does.

Breitschwerdt has seen all sorts of animals and mites, TICKS, fleas and even spiders test positive for Bartonella.

“Animals are the primary reservoir for the Bartonella species,” he said.  https://www.northcarolinahealthnews.org/2013/12/05/bartonella-is-everywhere-so-why-dont-we-know-more-about-it/

While losing your father is a heavy blow, all of us out here in Lyme-land are indebted to a suffering man and his son who is leaving no stone unturned to discover all there is to know about an under appreciated pathogen causing all sorts of animal and human illness.

You can be perfectly healthy and have no cat contact and still get infected with Bartonella: